The Fed is a laggard, now discussing when and how to taper QE. The ECB is an even bigger laggard, as inflation begins to rage.

The Fed is a laggard, not the leader, in ending the ridiculously easy money policies. At the ECB, internal resistance is building against its asset purchases but for now is getting squashed, leaving the ECB even further behind than the Fed.

The Swiss National Bank continues full tilt, but it doesn’t buy Swiss assets; it prints francs and dumps those printed francs for assets denominated in euros, dollars, and other currencies, including US stocks, which is a different ball game and works as long as enough foreign investors are silly enough to buy these Swiss francs.

But other central banks have already started the process of tapering asset purchases or hiking rates. The Bank of Japan, which started tapering months ago, has now completed its tapering and its total assets actually fell. And some central banks have announced rate hikes, and others have already imposed hiked rates, including shock-and-awe rate hikes in Brazil, Russia, and Turkey to tamp down on raging inflation.

So these are the major central banks that are ever so gingerly stepping away from the ridiculous easy money policies.

The Reserve Bank of Australia announced today that it would taper its QE, by reducing weekly purchases of government bonds by A$1 billion a week, to A$4 billion a week.

The Bank of Japan, one of the most voracious money printers over the years in terms of the size of its economy, behind only the tiny Swiss National Bank, has already been tapering its asset purchases for months. With the BoJ, one has to look at the numbers, not at the mumbo-jumbo in the press releases. The BoJ publishes its balance sheet numbers every 10 days.

The balance sheet data release on July 2 revealed that its total assets, after months of slowing purchases, actually fell by ¥7.7 trillion ($70 billion) at the end of June compared to the end of May, to a still gargantuan ¥717 trillion ($6.5 trillion): 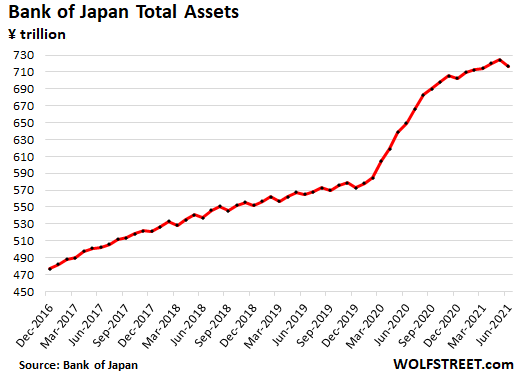 The three-month moving average of its monthly QE purchases shows the ongoing trend: In April, May, and June, its total assets increased by an average of only ¥0.78 trillion per month, the smallest increase since the beginning of Abenomics in 2012: 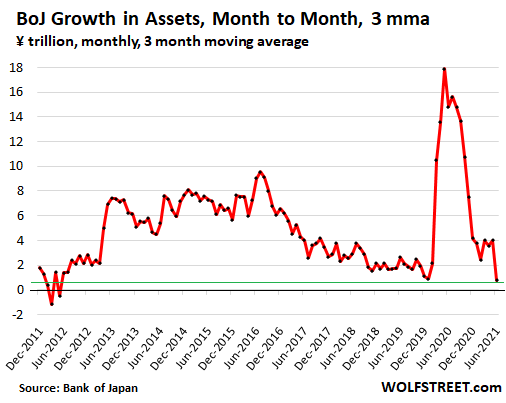 The assets on its balance sheet have now dropped from C$575 billion at the peak in March, to C$481 billion as of June 30: 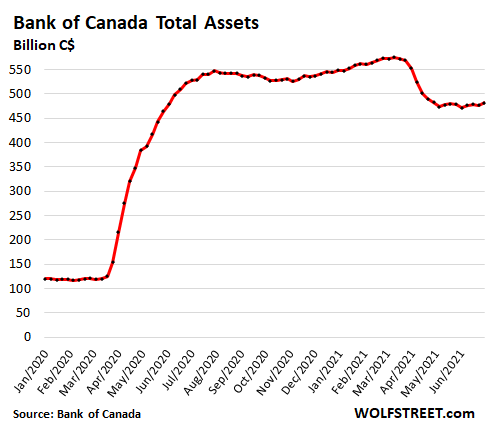 The reason this tapering isn’t tapering, according to BoE governor Andrew Bailey at the post-meeting press conference, is that the BoE didn’t change its “fixed amounts” of its overall QE target of £895 billion, it’s just buying less per week to get to this target.

The Central Bank of Brazil has hiked its policy rate three times by a total of 2.25 percentage points, since mid-March, 75 basis points each time. The first of the rate hikes was shock-and-awe, with economists expecting much less of a hike. Since March, the Central Bank has raised its policy rate from 2.0% to 4.25%, and has put more rate hikes on the table, to tamp down on raging inflation.

The Bank of Russia has been “surprising” economists with multiple rate hikes, and steeper rate hikes than expected, starting March 19 with a 25-basis-point rate hike, when none was expected, followed on April 23 with a 50-basis-point hike, and on June 11, with another 50-basis-point hike. Over the period, it had raised its policy rate from 4.25% to to 5.50%.

The next policy meeting is scheduled for July 23. And Bank of Russia Governor Elvira Nabiullina has already prepared the markets for the possibility of a shock-and-awe rate hike of up to 100 basis points. The reason: raging inflation, which the Bank of Russia, as she said, sees as “not transitory.”

The Bank of Mexico hiked its policy rate by 25 basis points on June 24, to 4.25%, also surprising economists that had not expected a rate hike. No one ever appears to be expecting rate hikes.

Norges Bank, the central bank of Norway, which never got into QE, confirmed repeatedly that it would start raising interest rates in the second half of this year, now likely in September, and put two more rate hikes on the table for next year.

The Riksbank, Sweden’s central bank, announced in late April that it is following through on its plan and end its QE program by late 2021.

The Fed itself is now discussing when and how to reduce its asset purchases. The Fed still claims that it sees the raging inflation as “transitory” or “temporary.” In its announced sequence, it will end its asset purchases first; then after the balance sheets stops growing, the Fed will hike its policy rates; then later, the Fed may shrink its balance sheet. This was the sequence last time, when inflation was still below the Fed’s target, and that’s the plan going forward.

The gradual pace assumes that this raging inflation, the worst since 1983 even according the Fed’s own low-ball measure, of today is truly “temporary.” But if it turns out that business and consumer behavior with regards to inflation has changed — as I see and allege all over the place, including in the largest retail category, auto sales — which would render this raging inflation much more persistent, then the Fed may belatedly come up with its own shock-and-awe treatment to get a handle on it.