There are whole generations who never experienced this type of inflation, this type of destruction of the dollar’s purchasing power.

The Fed’s favorite inflation measure – which is the lowest inflation measure the US government provides – spiked further in May to multi-decade highs. Sure, it’s just “temporary” or “transitory” or whatever in the sense that next month and a year from now there will be a different number. But the loss of purchasing power of the consumer dollar, including the dollars earned with labor, is permanent. That won’t come back.

The Personal Consumption Expenditures Price index without food and energy, the “core PCE” index, jumped 0.5% in May from April after having jumped 0.7% in April and 0.4% in March, according to the Bureau of Economic Analysis today. In order to dodge the infamous but now diminishing “Base Effect” – comparing today’s readings to the low inflation readings in the same month a year earlier – we’ll look at “annualized” core PCE inflation first.

The three months of May, April, and March combine into an annualized core PCE inflation rate of 6.4%, meaning that if price-increases continue for 12 months at the pace of the past three months, the annual inflation rate would be 6.4% as measured by the lowest lowball measure published in the US. This was the red-hottest three-month annualized inflation rate since August 1983. 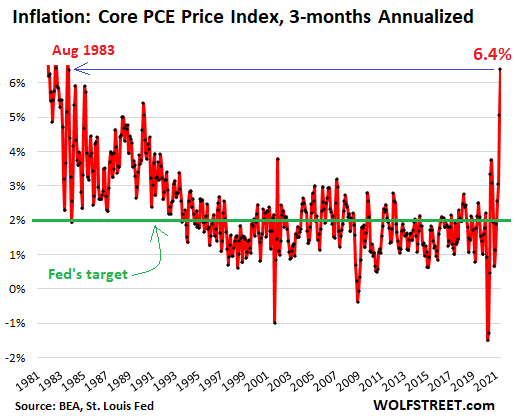 The core PCE inflation index is the measure the Fed uses for its inflation target, which currently is 2% (green line in the chart).

The annualized core PCE inflation rate shows to what extent inflation has suddenly heated up in this spring. The Base Effect applies only to year-over-year comparisons and has no impact on these three-month annualized rates.

There are whole generations of adults out there today that have never experienced inflation like this.

Compared to May last year and not annualized, Core PCE inflation – jumped by 3.4%, the biggest year-over-year increase since early 1992. 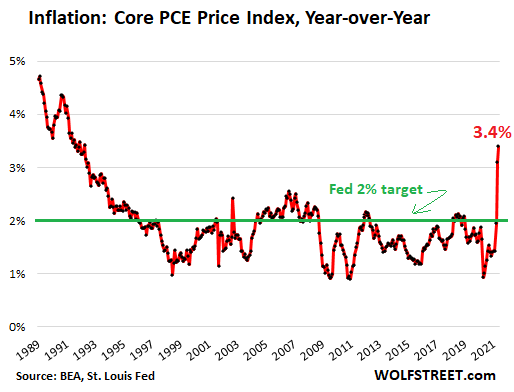 Core PCE is the lowest lowball inflation measure in the US. The headline PCE inflation index, which includes food and energy, jumped 3.9%, according to the BEA today.

The Consumer Price Index (CPI) inflation index, released by the Bureau of Labor Statistics two weeks ago, jumped 5.0% in May compared to a year ago, and by over 8% on a three-month annualized basis. The purchasing power of the consumer dollar, the CPI corollary also released by the BEA two weeks ago, plunged by 9.5% on a three-month annualized basis. These are red-hot inflation surges that many adults in the US have never seen before.

Surely, some items in the inflation basket will unwind their current price spikes to some extent, such as the historic price spike in used vehicles. But those prices won’t go back to where they were a year ago. They’ll unwind some, and then they’ll continue to rise from there. As those spikes unwind, other prices begin to surge – such as in services, and we’re already seeing that.

These price spikes that then unwind are the “transitory” part of inflation – meaning those price spikes won’t go on forever. But prices are already taking turns with their spikes.

But there is now a “persistent” part of inflation in the works. This is something we’re seeing that we haven’t seen in decades: The mindset has changed. Price resistance has gone away. Consumers and businesses are willing to pay these higher prices, are accepting higher prices, and are including them in their calculus.