The market psychology behind “asking rents”: price discovery in uncertain times. But they’re not actual rents and don’t go into CPI.

“Asking rents,” a measure of the apartment rental market, is the rent that landlords advertise for their available rental units. Computers grab these asking rents from all major online sites. So the median asking rent is not survey based. But it does not indicate if those apartments were actually rented out at those rents, or if they’re still vacant. And those asking rents are now showing a peculiar effect.

So there’s Newark, NJ, a small city across the Hudson River from the largest apartment market in the US, New York City, which is also one of the most expensive. Last year, it was said that a gazillion people left New York City either to rent or to buy somewhere else, because now they could work from home and could live anywhere, leading to massive home-price spikes in cities and towns further out across the area.

By December 2020, to the amusement and bafflement of WOLF STREET readers, the median asking rent in Newark had spiked 50% from July 2019, and 36% from July 2020, to catapult the market to the 9th most expensive rental markets in the US. And that spike, according to data from Zumper today, totally collapsed by June: 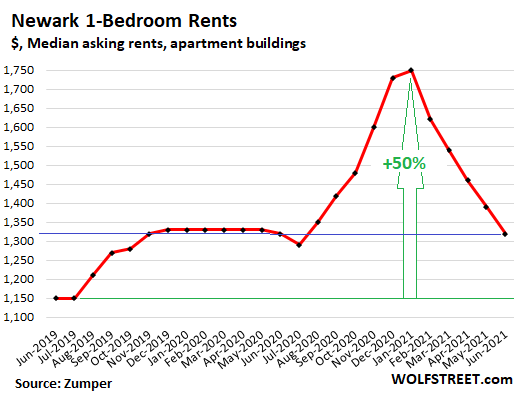 Landlords must have figured that these gazillions of people abandoning New York City would come flooding into town, and asking rents could be jacked up. Landlords checked everyone’s apartment listings and saw that others were jacking up their rents too, and so they jacked them up further to try and see if they could get tenants at those rents.

Maybe at first, the apartments got rented out at those higher rents, but as rents were hiked into the stratosphere, driven by the psychology of higher prices begetting higher prices, potential tenants started losing interest. Like: You want me to pay what for that?

It could be that few leases were actually signed late last year and early this year; and we don’t know at what rents those leases were signed. But by February, landlords began to realize that if they wanted to fill their units, they’d have to come down with their asking rents.

The other end of the psychology of asking rents.

At some point, the idea spread that the exodus had ended. Turns out, it wasn’t a gazillion people after all who’d left New York City. And some of those people who’d left were coming back because they were frustrated and bored out in the suburbs or further afield or in Newark and because they had to go back to the office a few days a week.

Landlords in New York City started perking up their ears, and soon they started hiking their asking rents, whether or not they could fill their vacant units at those rents. So the median asking rent started rising in February. 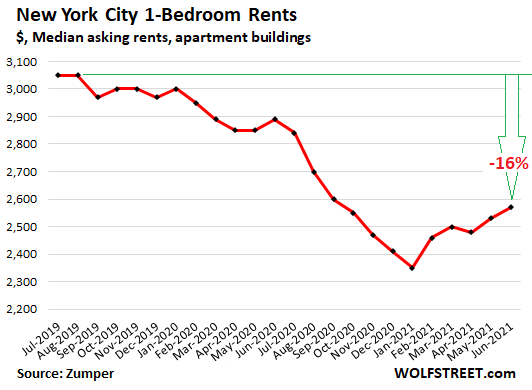 In other expensive markets too.

The same phenomenon occurred in other expensive rental markets. In San Francisco and Silicon Valley, among the most expensive rental markets in the US, rents had plunged last year and earlier this year, while rents skyrocketed in much cheaper cities an hour or two inland – Sacramento and Fresno for example. And now those trends in asking rents have started to reverse. 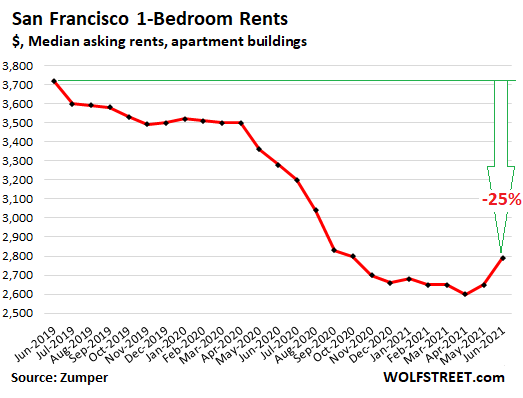 In Sacramento, an example of cheaper cities that San Francisco rent refugees fled to, the massive jumps in asking rents last summer hit resistance recently or maybe even began to unwind: 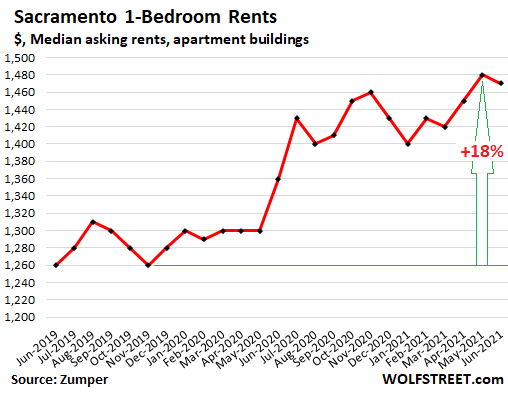 San Jose, a big part of Silicon Valley, also showed some efforts by landlords to get more for their units. This happened in January and February this year, but then fizzled again, and it happened again in May, but in June fizzled again, with the median 1-BR asking rent at $2,160, down 15% from July 2020. 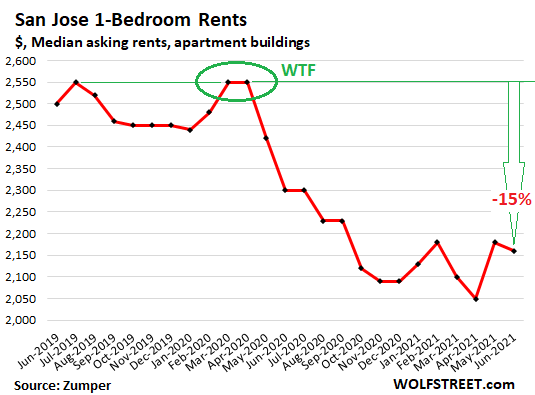 In the San Jose chart above, note the big jump in asking rents in March and April 2020, when the city was locked down solid, and few people looked at apartments. But it was a good time to raise asking rents because few people were going to sign a lease anyway. That too is part of the psychology of asking rents. They’re a reflection of a try-and-see market. 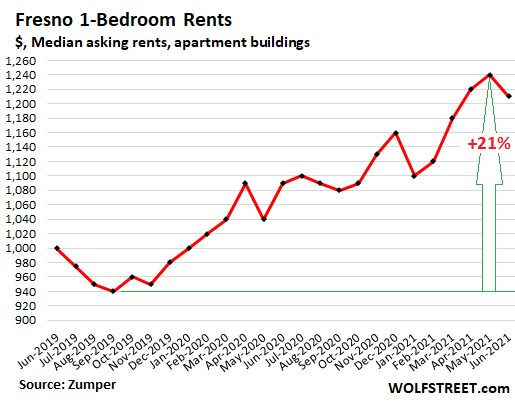 This phenomenon is playing out across the country, with asking rents reversing their plunge in big expensive coast markets and reversing their spike in smaller markets further inland.

But these are asking rents. They’re a way for landlords to find out what the market will bear. If the unit sits vacant long enough, they’ll drop the asking rent.

Asking rents are not actual rents paid and don’t go into CPI.

The rent component of the Consumer Price Index (CPI) is based on the Housing Survey that follows a very large panel of rental units, including rent-controlled units, across the US over time. The tenant in the unit at the time is asked how much they pay in rent, and this is compared to what a tenant in the same unit said during the last survey.

Tenants are not asked monthly, but with much longer time spans in between. In addition, landlords might raise rents on their tenants only once a year, or less often. As a result, the CPI for rents doesn’t move quickly, unlike asking rents. Changes in rents filter only gradually into the CPI for rent, which for the US overall, despite big year-over-year plunges in asking rents in some of the largest markets, was up 2.2% year-over-year in May, while the overall CPI shot up 5% year-over-year, and the three-month annualized CPI shot up over 8%, the most since the early 1980s.

113 comments for “Is this the Reversal of Exodus-Triggered Plunges & Spikes of Rents? Mmmm-maybe”