According to “Bubble Ranking” by Bloomberg Economics.

Central banks say this after spending years repressing short-term interest rates via their policy rates – often now into the negative – and repressing long-term interest rates via asset purchases, including housing bond purchases, such as MBS, and thereby driving down mortgage rates, which then trigger enormous price increases and soon housing bubbles.

So where are we today with this, for OECD countries?

Bloomberg Economics has a “Bubble Ranking,” based on data from the OECD. Not all candidates for the most splendid housing bubbles are members of the OECD, such as China. So this list doesn’t include China and other non-OECD members.

Most of the data from the OECD is through Q1 2021, thereby having missed the price spikes of the past two months. But it will do.

Five indicators go into the Bubble Ranking, according to Bloomberg Economics. In addition to two price growth measures (home price gains adjusted and not adjusted for inflation), it uses two measures (price-to-rent and price-to-income) to assess if these price gains are sustainable:

Based on this method, New Zealand and Canada occupy the top two spots of the “Bubble Ranking.” And there has long been no doubt about this.

Here are the top 15 most splendid housing bubbles of the OECD, as per Bloomberg Economics Bubble Ranking. The red fields show the top three per indicator: 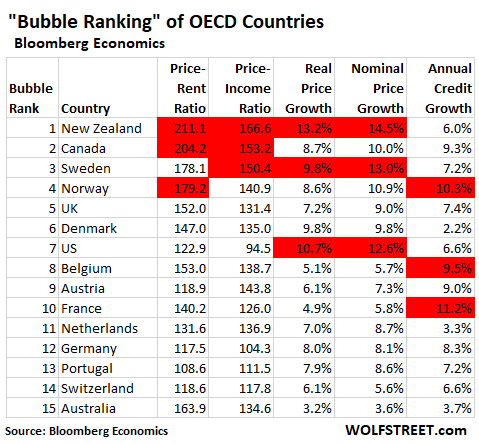 Some individual central bankers, including in the US, have now come out and referred to the housing market as a “bubble,” or have referred to it being called a bubble by others, and have stopped denying it.

There is now also a cascading move underway for central banks to remove accommodation of the markets. Some have already started raising rates, others have announced that they will raise rates, others have cut back on their asset purchases, including the Bank of Canada and the Bank of England. The Fed is gingerly preparing the markets for the same by jabbering endlessly about it with conflicting messages.

But even as central banks are beginning to back off, don’t expect them to take responsibility for the bubbles they have purposefully created.