Housing craziness is front and center.

The Bank of Canada, which already holds over 40% of all outstanding Government of Canada (GoC) bonds – compared to the Fed, which holds less than 18% of all outstanding US Treasury securities – announced today that it would reduce by one-quarter the amount of GoC bonds it adds to its pile, from C$4 billion per week currently, to C$3 billion per week beginning April 26.

In its statement, it pointed at the craziness in the Canadian housing market – “we are seeing some signs of extrapolative expectations and speculative behavior,” it said.

Back in October, the BoC made the first reduction, tapering purchases of GoC bonds from C$5 billion per week to C$4 billion, and it had stopped adding mortgage-backed securities, of which it had never bought many to begin with.

In March, the BoC announced that it would unwind its liquidity facilities, thereby reducing its total assets by about 17%, from C$575 billion at the time, to C$475 billion by the end of April. And this has progressed as planned.

The BoC cited “moral hazard” associated with this central bank craziness as one of the reasons for the unwinding of its liquidity facilities, what are now mostly repurchase agreements (repos) and short-term Government of Canada Treasury bills. Its total assets dropped by 13% over the past month, to C$501 billion on its most recent balance sheet through the week April 14: 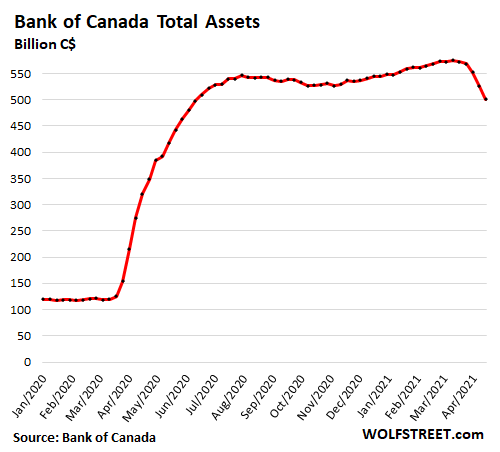 The total amount of the assets has declined because the BoC is unwinding its liquidity facilities. The largest remaining categories are the term repos and the short-term Treasury bills. As they mature, the BoC gets its money back, but doesn’t replace those securities, and the balance declines. The remaining asset categories, such as MBS, provincial bonds, corporate bonds, etc. – the lines at the bottom of the chart – have mostly been unwound or are minuscule. 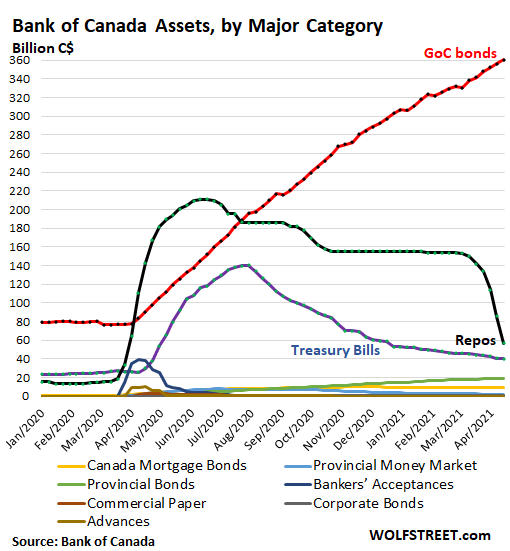 The BoC also announced in the statement that it would maintain its policy interest rates, with the overnight rate at 0.25%, the Bank Rate at 0.5%, and the deposit rate at 0.25%.

But rate hikes were moved forward to the second half of next year, and as early as July next year.

Or maybe sooner or later: “In the current context, though, there is considerable uncertainty about the timing, particularly in light of the complexity involved in assessing supply and demand that I mentioned earlier,” BoC Governor Tiff Macklem explained in the opening statement.

But the housing market craziness that has been unfolding in Canada was front and center.

“The Bank will continue to monitor the potential risks associated with the rapid rise in house prices,” it said in the policy statement.

“You won’t be surprised to hear that we also spent some time discussing what is happening in the housing market,” Macklem said in his opening statement. Here are some tidbits:

“The pandemic has led to some unique circumstances. With so many households working and studying at home, we see many people wanting more living space. And interest rates have been unusually low, making borrowing more affordable,” he said.

“We are seeing some signs of extrapolative expectations and speculative behavior,” he said.

“Given elevated levels of household debt and the risks that households may overstretch in the face of rising housing prices, we welcome the recent proposal by the Superintendent of Financial Institutions to introduce a fixed floor to the minimum qualifying rate for uninsured mortgages,” he said.

“New measures just announced in the federal budget will also be helpful,” he said, including the annual 1% tax on vacant homes owned by non-resident non-Canadians.

“We are watching developments in the housing market very closely, and we will have more to say about this in our Financial System Review next month,” he said.

And for your amusement, here is the house price explosion in Toronto, according to the Teranet National Bank HPI, whose method (sales pairs) is comparable to the Case-Shiller Index in the US. Over the past two years, the index has jumped by 18% from already very high levels: 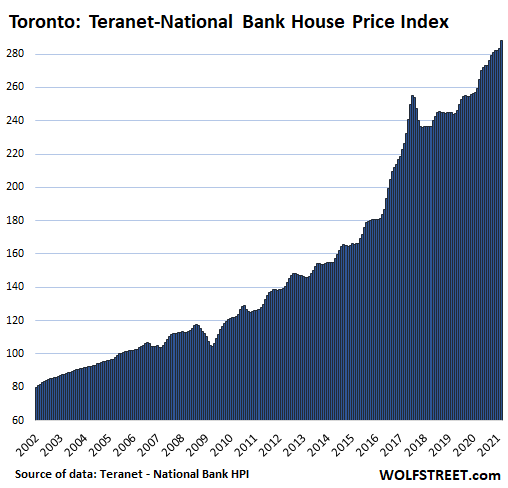