Getting massacred on the edge of the stock market.

Nikola, one of the most prominent startups in the EV space, went public amid immense hoopla when it was acquired by a publicly traded SPAC in early 2020. Its shares then multiplied by eight in no time at all, to $80 a share, to form one of the most infamous WTF charts of the crisis.

But today, shares fell below the $10 level at which it had been acquired, having now completely unwound that infamous WTF spike. As of today, shares have plunged 88% from that spike and closed at $9.65 (data via YCharts): 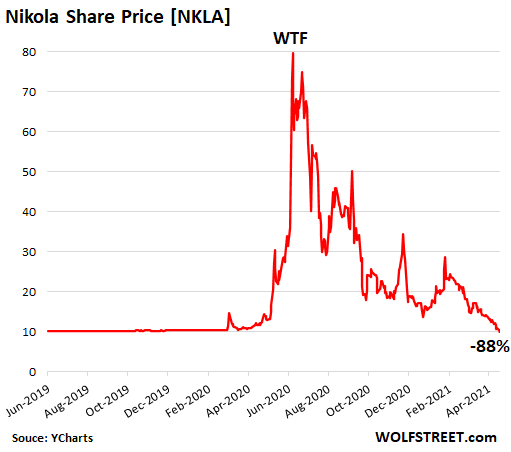 With all these SPACs, there has been enormous hype, often involving celebrities. But when the SPAC hype-boom coalesced with the EV startup hype-boom, the fireworks were spectacular, such as with Nikola which collapsed amid a variety of allegations of “deception.” In its aftermath, GM scaled back its super-hyped deal with Nikola, and the whole thing now looks like a mirage.

The SPAC boom has been unwinding more broadly, thereby unwinding another spectacular WTF chart of the crisis, the Defiance Next Gen SPAC ETF [SPAK], which tracks SPACs before and after they merge with a target company. The ETF has plunged 32% since February 16, and has now fallen below where it had been when it was launched in October 2020: 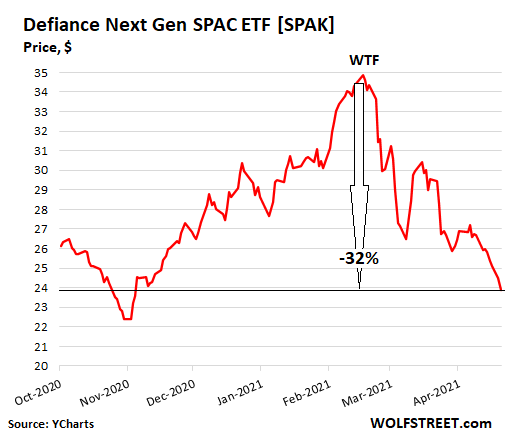 The EV startup hype-boom greased by the SPAC hype-boom produced these spectacular results:

QuantumScape [QS], which develops batteries for EVs, was acquired by a SPAC in August last year, and shares skyrocketed to the WTF moment of $132, before collapsing by 77% to $30.60 today. 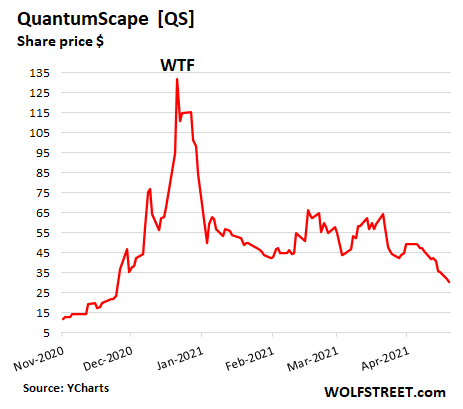 Canoo, an EV startup that was acquired by a SPAC and now trades as [GOEV] has collapsed by 69% from its WTF spike in December that had reached an intraday high of $24.90. Today it closed at $7.65. 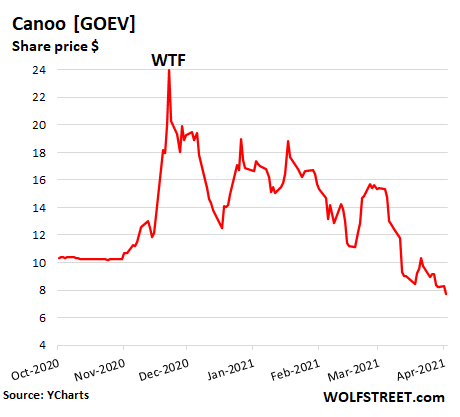 EV startup Lordstown Motors [RIDE], which was acquired by a SPAC in the summer of 2020, is another WTF chart gone awry, with shares having collapsed by 71% from the peak in September, to $9.20 today, below the price at which the SPAC traded before it acquired Lordstwon. 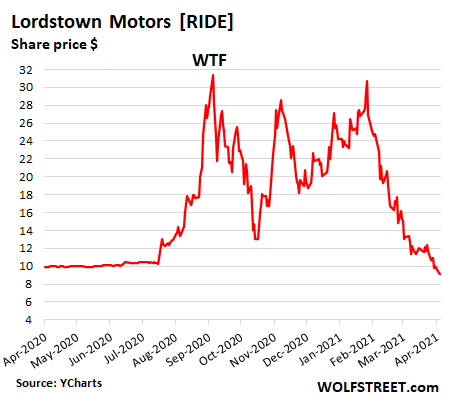 Romeo Power [RMO], which is developing batteries for EVs, collapsed by 81% from its WTF spike in December, to close today at $7.21 a share. The company is now entangled in a securities fraud lawsuit seeking class-action status. 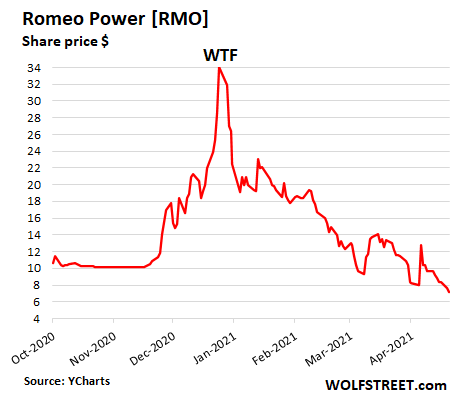 XL Fleet [XL], which is developing EV drive systems for fleets, was acquired by a SPAC late last year and then soared to a WTF peak of $35 before collapsing by 82%, to $6.13 today. 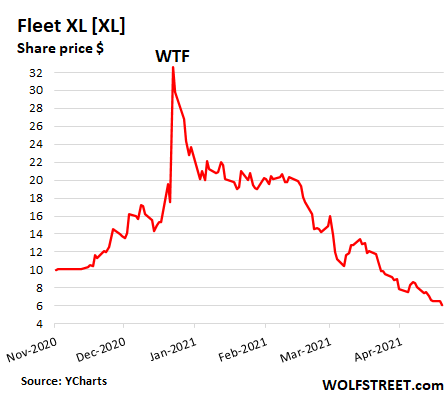 Lucid Motors, which is going public via a merger with the SPAC Churchill Capital Corp IV, trades under the SPAC’s ticker [CCIV]. Those shares have now collapsed by 71% from the WTF peak in February this year. 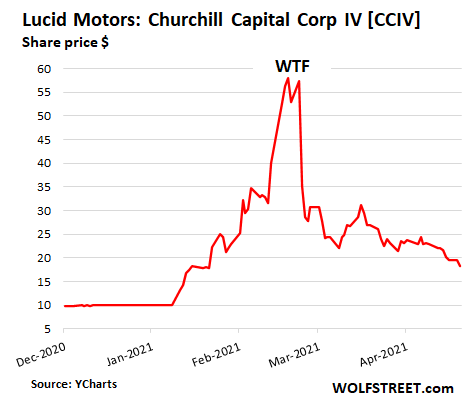 There are a number of other EV startups being currently hyped to the public while they’re being acquired by SPACs.

Faraday Future is the most infamous one of them. The company was founded in 2014 by a Chinese entrepreneur who filed for bankruptcy in 2019 in the US to deal with $3 billion in debts. The company, which has failed in everything and never sold a single car, plans to go public by being acquired by the SPAC Property Solutions Acquisition Corp, at a $3.4 billion valuation.

Faraday is now being hyped all over the place. But buying those shares is only attractive if you know that they’re going to be whipped to another silly WTF moment, which is the moment to dump the shares into the lap of some befuddled greater fool that thinks that the share price could multiply again before it’s time to dump them.

But Faraday would be a great opportunity for potential investors to dig in their heels and go on buyers’ strike, and let someone else get crushed trying to bail out the current investors, promoters, and creditors. Let them eat cake.