The yields of the riskiest category of junk bonds – those rated CCC or below, which range from “substantial risk” to “default imminent with little prospect for recovery,” according to my cheat sheet of corporate bond ratings – have dropped to record lows, despite the enormous operational issues these companies face and despite the high probability that they will default and restructure their debts or liquidate, thereby offering investors a great opportunity to get crushed.

The average CCC-or-below rated junk bonds have yielded between 7.09% and 7.16% over the past two weeks, a new all-time record low. During a crisis, these companies are among the first to default. They have negative cash flows and fund their operations by issuing ever more debt, and when investors stop throwing money at these companies, it’s over, which happens massively during a crisis. But not this time. What crisis? 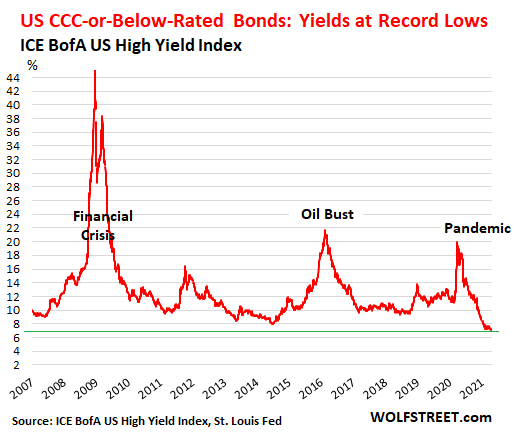 When bond yields fall, the prices of those bonds surge, and investors that bought those bonds in the market at the current yields paid a premium over face value.

For example, AMC Entertainment, that has been talking about how it is trying to stave off a bankruptcy filing, issued $500 million of secured notes in April 2020 to give it more cash to burn, as its theaters were shut down, and as its revenues were collapsing. The bonds, rated CCC by S&P, have a coupon interest rate of 10.5% and are due in April 2025.

The bonds immediately took a beating, prices fell, and the yield rose, reaching 30% in October last year, with the bonds trading at 54 cents on the dollar, as a bankruptcy filing was being discussed. In Q4, revenues collapsed by nearly 90% from a year earlier.

But then investors shoveled more fresh money at the company that it could burn, and they chased after its existing bonds too, and the prices of the bonds surged and the yields fell. 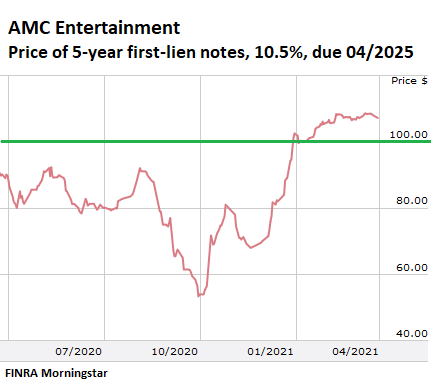 And this is the yield chart of the bond (via FINRA Morningstar): 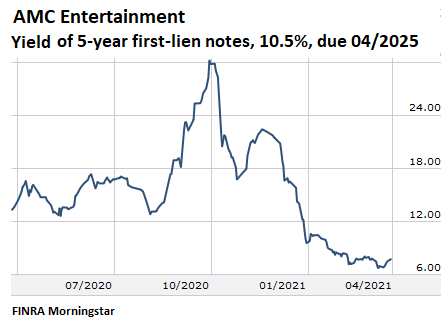 This fresh money being shoveled at these deeply trouble companies, by investors that are engaged in a raging chase for yield, gives these companies more cash to burn. As long as a company has plenty of cash to burn, and plenty of fresh money from new investors to pay off existing investors, everything is hunky-dory even if revenues are near zero, and losses are sky-high.

This is showing up in the amazing bankruptcy trends. Since the crisis began last March, as the Fed poured over $3 trillion into the markets and repressed interest rates all around, investors have piled into risk to get some yield, and they have doused companies with fresh money, amid ravenous demand for junk-rated debt, and bankruptcy filings during the crisis have dropped. 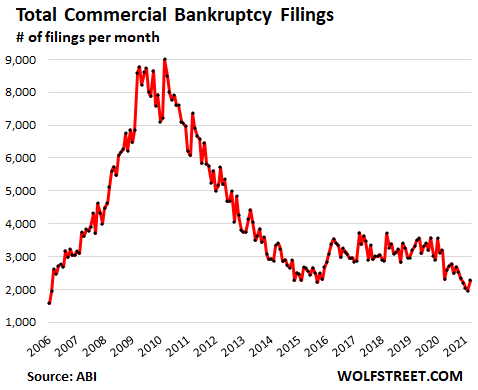 Bad deals are made in good times, the old adage goes. And these are the best of times to make bad deals. The Fed has seen to it that this is so. The Fed has whipped investors into foaming-at-the-mouth yield-chase frenzy.

The risks turns into reality afterwards, when these companies, now saddled with records amounts of debt, suddenly find investors to be a little more circumspect and unwilling to take those risks at those yields, which turns off the money-spigot.

63 comments for “Riskiest Junk-Rated Companies Borrow at Lowest Cost Ever amid Torrid Yield Chasing. AMC Bonds Sell at a Premium”