But shipment volume, though strong, is not at record levels.

Manufacturers, importers, distributors, retailers, and others have been groaning under surging shipping expenses as freight companies have raised rates, amid bottlenecks and strong demand. The amount these shippers spent in March on shipping goods to their customers spiked by 17% from February, by far the biggest month-to-month spike in the data going back to 1990, according to the Cass Freight Index for Expenditures. But February had already been a record month for freight expenditures. Compared to March last year, just before the sharp decline set in, the Expenditures Index spiked by 27.5%.

This spike in March was driven by the stimulus-fed boom in consumer spending on durable goods, thereby increasing freight volume, thereby producing the worst ever trade deficit because a lot of the goods are imported, and entailing freight rates that have shot higher, particularly in trucking.

The Cass Freight Index covers all modes of transportation, but it is heavily focused on trucking, with truckload shipments representing over half of the dollar amounts, and less-than-truckload (LTL) shipments in third place, behind rail. It also tracks parcel services and others, but does not cover bulk commodities. 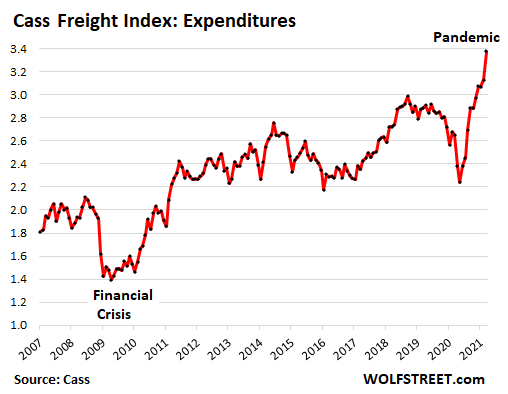 More broadly, Cass reported that the freight rates embedded in the components of the Cass indexes accelerated by 15.8% year-over-year, after having jumped by 12.3% year-over-year in February. “We still expect this trend to press higher near-term, as strong freight demand meets shortages of both drivers and trucks,” the report said.

Shipment volume is strong, but not at record levels.

Shipment volume in March (red line and squares in the chart below) jumped 5.6% from February and 10% year-over-year, according to the Cass Freight Index for Shipments.

But it didn’t set records for March; the index for shipment volume matched March 2019 and was slightly below the record March 2018 during the shipments boom at the time, triggered by efforts to front-run the tariffs and piling up inventories, rather than strong demand by end users. 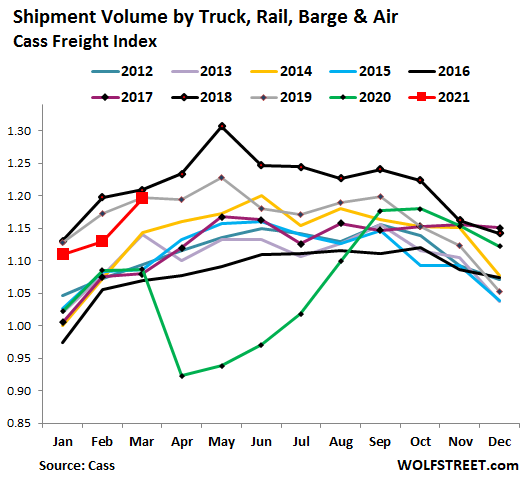 Retail prices of diesel started to rise in November last year after having plunged when the price of crude oil collapsed in the spring. The national average price of No. 2 diesel, according to the EIA, has jumped by 31% since November, or by $0.74 per gallon, to $3.13 per gallon.

Higher fuel prices put upward pressure on freight expenditures. But diesel prices remain relatively subdued compared to the pre-oil-bust years of 2014 and before. So still higher diesel prices could be another thing to worry about, if crude oil prices recover anywhere near to those pre-oil-bust levels, which at the moment is hard to imagine: 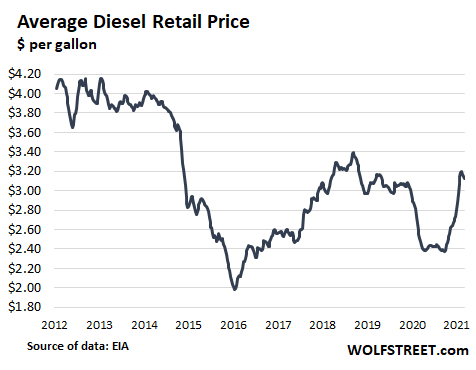 What everyone in the transportation business now wants to know is what happens to consumer demand for goods, when the stimmies that triggered an epic spike in retail sales, are spent…

And I suspect that the mind-boggling distortions in the economy, driven by historic monetary and fiscal stimulus including direct payments of “free money” to businesses and consumers, are going to serve up many more headaches and price pressures.

95 comments for “Freight Expenses Spike the Most on Record”