The US trade deficit in goods and services with the rest of the world, after going from record to record, soared by, I mean worsened by 87% in February compared to February last year, to $71.1 billion, according to the Census Bureau today. As the trade deficit in goods hit another all-time record, the trade surplus in services, which was already small, plunged to a nine-year low: 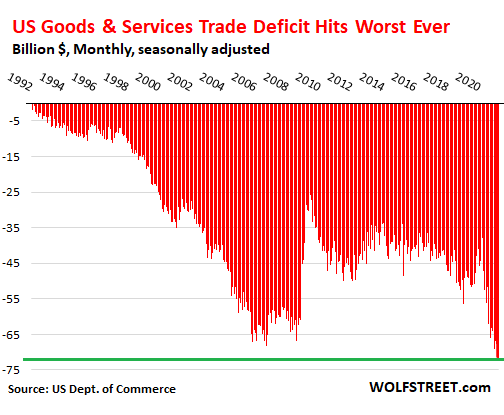 Trade deficits are a negative in the GDP calculation. They’re not a sign of a growing economy – though that is how they’re often described – but a sign of rampant offshoring of production of consumer and industrial goods to cheap countries.

Remember back in the day when globalization by Corporate America was still a good thing, and worries about a surging trade deficit in goods were brushed aside with the hoped-for exponential growth in the trade surplus of services, such as movies and software? Well, there is a trade surplus in services, but it’s small, and the surplus of services in February plunged 24.4% to $16.9 billion, the lowest since 2012. Note the deterioration of the services surplus since early 2018 (green columns): 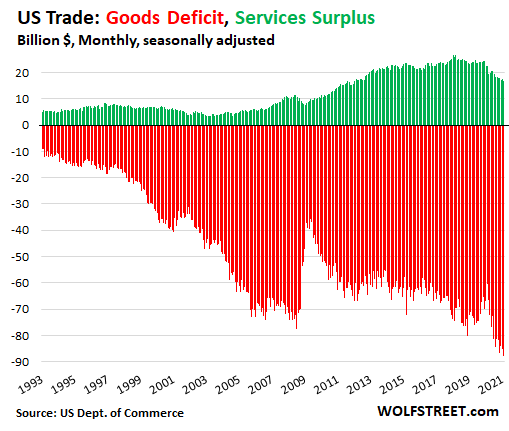 But instead of reversing the course of the prior two decades of ballooning trade deficits, Corporate America went into hyperdrive during the Financial Crisis to offshore not only production, but also the design work that went along with it.

Most consumer goods bought in the US that are classified as “durable” – from smartphones and bicycles to appliances and clothes – are manufactured overseas. Go into a Walmart and try to find some durable goods that are still made in the US. On Amazon, foreign vendors are now direct-selling their products to US consumers. And even if the product is assembled in the US, such as cars and trucks, many or most of the components are designed and manufactured overseas and then imported.

This is now the pattern: After decades of rampant offshoring of production, US consumers get free stimulus money in the hopes that they will turn this taxpayer money – or rather future taxpayers’ money since this is borrowed money and will have to be dealt with by future taxpayers for all times to come – into a big-fat stimulus for the manufacturing economies in other countries.

Fired up by stimulus money, but also by not being able to spend on services, such as airline tickets, cruises, and concert tickets, consumer spending on durable goods has shot through the roof. And that’s where the surge in imports of goods came from: 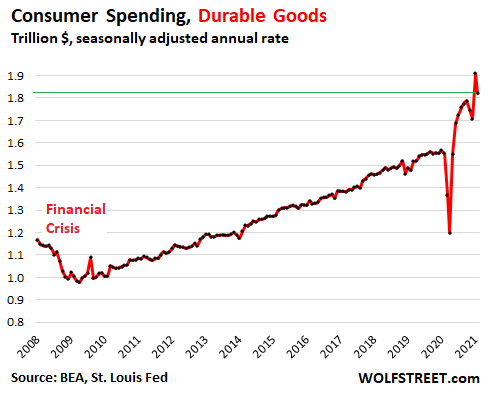 This ballooning and record trade deficit is the most predictable outcome ever: Send stimulus checks to consumers and they’ll crank up the economies of China, Mexico, Germany, and other countries. The February trade data does not yet include the effects of the current generation of the $1,400 stimmies, which will show up in the trade figures over the next few months.

251 comments for “The Power of Stimmies after Decades of Rampant Offshoring: Trade Deficit Hits Worst Ever, Duh”