The government better not ever stop dousing consumers with free money.

The latest wave of stimmies, this time $1,400 a pop, began to wash over our dear consumers in March, and they went out and spent it on everything in sight, except at grocery stores, as they’re still trying to use up their three-year supply of pasta and toilet paper. A few weeks ago, when I reported on consumer spending that had dropped in February as the $600-stimmies from December-January had run out, I predicted: “Waiting for a $1,400-stimmie WTF spike in March.” And what a doozie we got today.

Retail sales in March spiked by 9.8% from February to a huge record $619 billion, seasonally adjusted, according to the Census Bureau this morning. Because March last year was already part of the lockdown plunge, I will compare all sales over the next few months to the same period in 2019. And compared to March 2019, total retail sales spiked by 20.8% to form the epic WTF chart of the year:

Prices have been surging at new and used vehicle dealers – with a big impact, as we’ll see in a moment with another WTF chart of the year – at gas stations, building materials stores, and at many other retailers. None of the data here is adjusted for inflation.

So those are the dominant powers behind the spike in retail sales: Price increases, filling holes left behind by snowmageddon, and above all, the stimmies.

New & used auto dealers and parts stores: Sales spiked 15.1% in March from February, to a WTF record of $134 billion, seasonally adjusted, amid rampant price increases. Compared to March 2019, sales were up 31%. This is the largest category of retail sales, accounting for 21% of total retail sales.

Earlier this year, the largest dealer group in the US bragged about historic profit margins. Even the Bureau of Labor Statistics reported that, despite its heroic efforts to repress price increases in its CPI via hedonic quality adjustments, used vehicle prices had surged nearly 10% in March compared to a year ago: 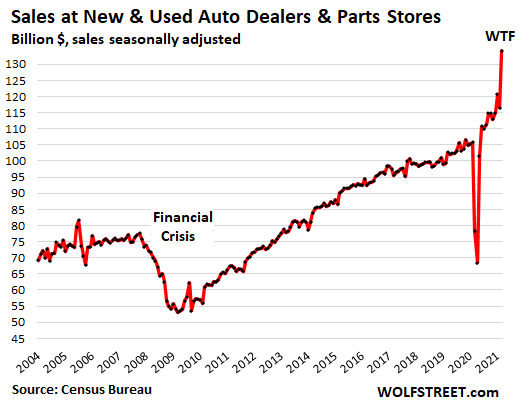 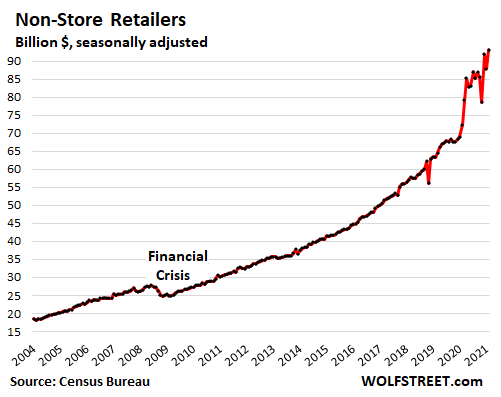 Food and Beverage Stores: Sales inched up 0.7% in March from February to $72 billion, having gone nowhere in 12 months, and were down 12% from the March 2020 spike in the era of pasta-and-toilet-paper hoarding. 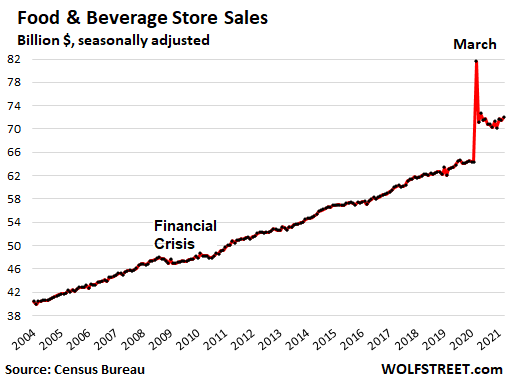 Restaurants & Bars: Sales jumped 13.4% in March from February to $62 billion (seasonally adjusted), thereby pulling nearly even with March 2019. But sales were still down nearly 5% from February 2020, just before the lockdowns. Included are cafeterias, delis, fast-food joints, high-end restaurants, bars, and other “food services and drinking places.”

In many cities, the indoor dining bans have spawned a wonderful new movement to eating outside, weather permitting. In San Francisco, reportedly 1,250 of these “parklets” have sprung up, and entire blocks are closed to traffic at night, as restaurants that line the street have built partitions outside and set up tables, chairs, and heaters. They do a thriving business, and the entire atmosphere is wonderful, with so many people eating and enjoying themselves outside for all to see. Just make sure to dress for it. 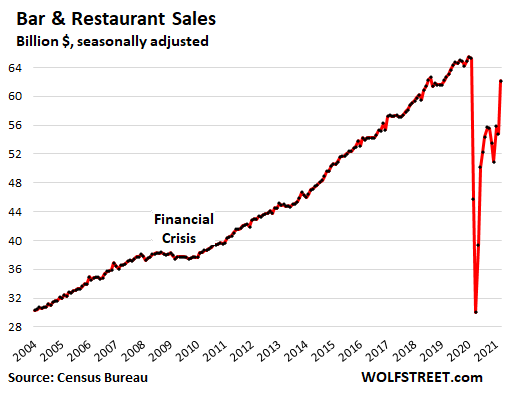 General merchandise stores (minus department stores): Sales rose 6.0% in March from February, to $56 billion, and were up 12% from March 2019, but were still down a smidgen from the spike in March 2020. The category includes the brick-and-mortar stores of Walmart, Costco, and Target, but not their ecommerce sales, which are included in ecommerce sales (nonstore retailers): 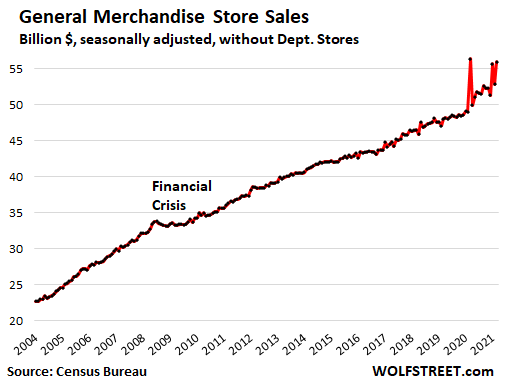 Department stores: sales jumped 13% in March from February, to $10.8 billion, despite the power of stimmies still down 5.5% from March 2019, on their long path into irrelevance. This includes the brick-and-mortar stores of Macy’s, Kohl’s, etc. but not their ecommerce sales, which are reported under ecommerce. 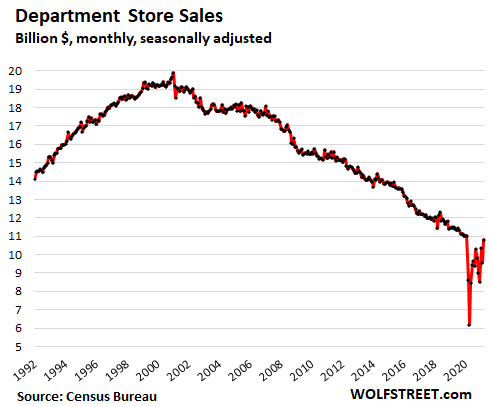 Building materials, garden supply and equipment stores: Sales jumped 12.1% in March from February, to a huge record of $44 billion, and were up 39% from March 2019, amid massive price increases in all kinds of products – for example, lumber prices in the spot market have nearly tripled year-over-year! – to create another WTF chart of the year: 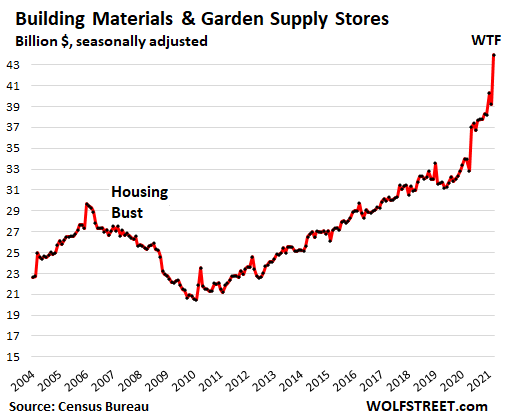 Gas stations: Sales jumped 10.9% in March from February to $46 billion, up 10.2% from March 2019, and the highest level since 2014, largely driven by big increases in the price of gasoline and diesel: 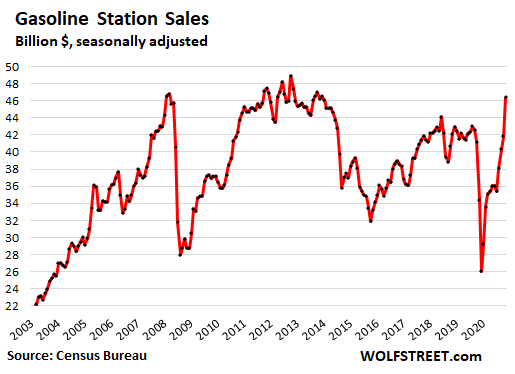 Clothing and accessory stores: Sales jumped 18.3% in March from February, to $22.8 billion, up 2.3% from March 2019, but below the peaks in 2018, and back in the same range prevailing since 2014. Even the power of stimmies and price increases couldn’t propel clothing sales at brick-and-mortar stores beyond that level: 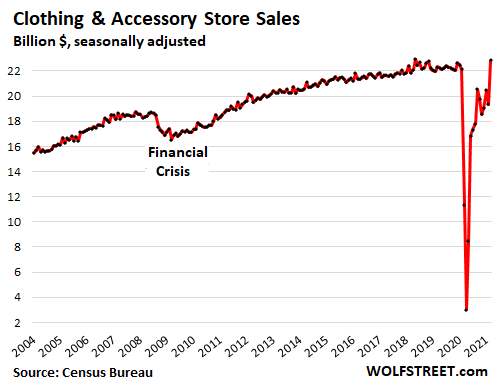 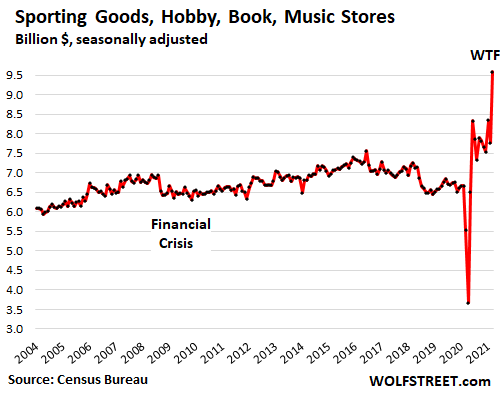 Furniture and home furnishing stores: Sales rose 5.9% in March from February, making up the territory lost in February, to $11.6 billion, and were up 18.8% from two years ago: 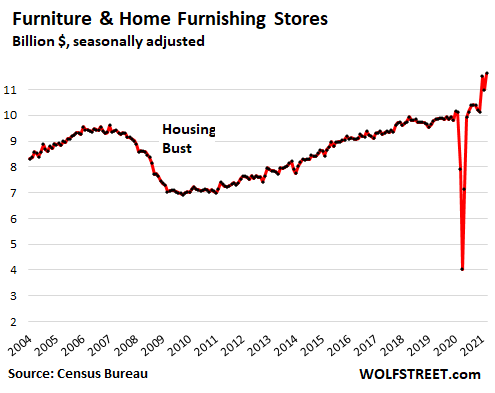 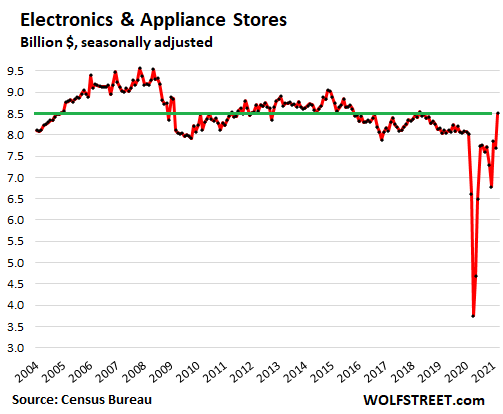 208 comments for “The Retail WTF Charts of the Year, Powered by $1,400-Stimmies and Massive Price Increases”