If the homeownership component in CPI mirrors the Case-Shiller Home Price Index, CPI would jump 5.1%! Not to speak of new & used vehicle prices, which I nevertheless speak of.

The Consumer Price Index jumped 0.6% in March compared to February, the sharpest month-to-month jump since 2009, according to the Bureau of Labor Statistics today, and was up 2.6% from a year earlier, after the 1.7% rise in February.

The infamous Base Effect, which I discussed last week in anticipation of what is now coming, was responsible for part of it: CPI had dipped in March last year, which created a lower base for today’s year-over-year comparison. Over the 13 months since February last year, which eliminates the Base Effect, CPI rose 2.3%. 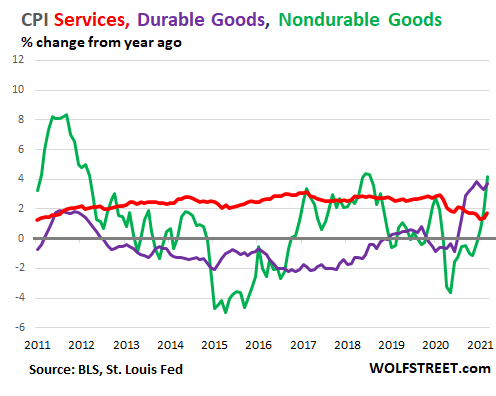 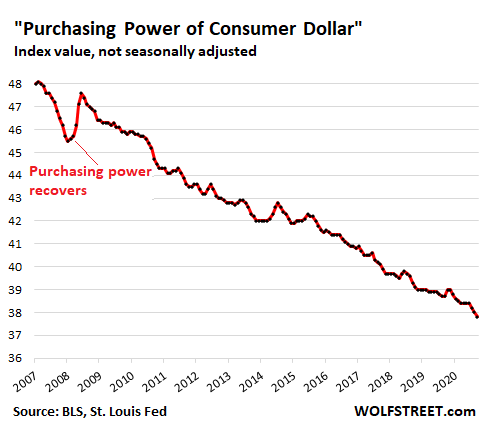 But wait, it’s a lot worse…

The three major Consumer Price Indices – CPIs for durable goods, nondurable goods, and services – over the long term, give a fascinating picture of what is going on with the CPI itself. These indices, shown below as index value, not year-over-year percentage change, were set to a value of 100 in 1982-1984. Since then: 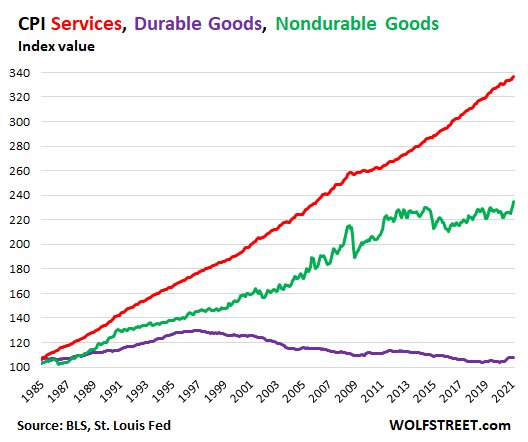 CPI for services held down by homeownership costs, which exploded in real life.

Housing costs – rent and homeownership costs combined – weigh about one-third of the overall CPI and about one-half of the services CPI. Rents of primary residence (accounting for 7.8% of overall CPI) ticked up just 1.7% in March compared to a year ago. In reality, rents have surged in many markets and plunged in the most expensive markets. So national rent increases of 1.7% might be close.

But the Case-Shiller Home Price Index, which is based on the sales-pairs method and has a better handle on housing bubble reality, soared 11.2% year-over year (purple line).

Had the homeownership component of CPI risen in line with the Case-Shiller index, the overall CPI would have jumped by 5.1% year-over-year – nearly double the published rate of 2.6%! 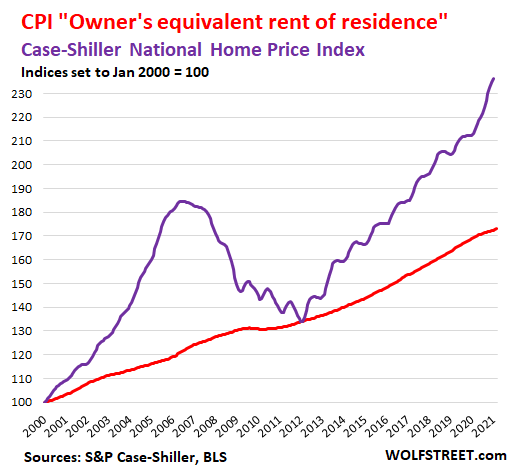 And just when you thought it couldn’t get worse…

This is due to the increasingly aggressive use of “hedonic quality adjustments.” As a product is improved and the price goes up, that price increase is then ascribed to the added costs of the quality improvements, and is therefore excluded from CPI, as CPI is supposed to track the loss of the purchasing power of the dollar, and not the costs of the improvement of products.

The theory is that you’re paying more because the product is better. This is true for consumer electronics and motor vehicles, which have vastly improved in all aspects over the past 20 years. But the aggressive application of hedonic quality adjustments leads to bizarre outcomes, including the long-term declining CPI for durable goods that has been weighing down the overall CPI.

The CPI for new vehicles – even as the largest dealer group in the US is bragging to Wall Street about the record prices and profit margins it’s getting – hasn’t moved at all over the past two months and was up only 1.5% from March last year, and has barely inched up the since the mid-1990s: 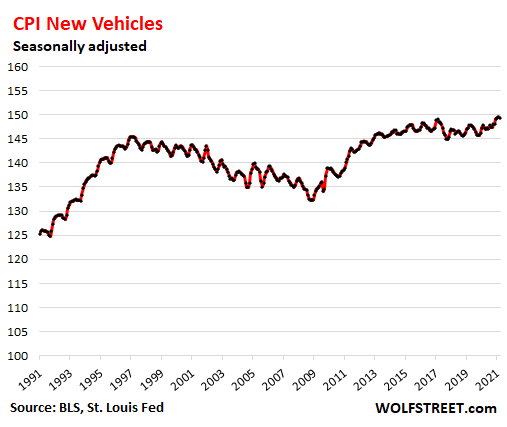 For a reality check, and for your amusement, here is my annual F-150 and Camry Price Index, representing the MSRPs of the best-selling truck and the best-selling car in the US from the 2021 model year back to the 1989 model year. The green line denotes the annual CPI for new vehicles:

The CPI for used vehicles ticked up 0.5% in March from February, after four months in a row of month-to-month declines. Those declines were likely due to hedonic quality adjustments finally catching up with prices that went haywire starting in July last year and spiked in a historic manner in the vast and liquid wholesale market as well as in the retail market.

Compared to March last year, the CPI for used vehicles was still up 9.4%, after double-digit price gains late last year. The chart shows this spike that peaked in October last year and has since backed off giving up a portion of the prior gains. But this recent decline has not been borne out by actual prices in the market, which remain red-hot.

Also note that despite the spike, the used vehicle CPI remained below the levels 20 years ago, even as actual used vehicle prices have surged. The index for March 2021 was 5.4% below the index value in March 2001. This is the power of aggressive hedonic quality adjustments: 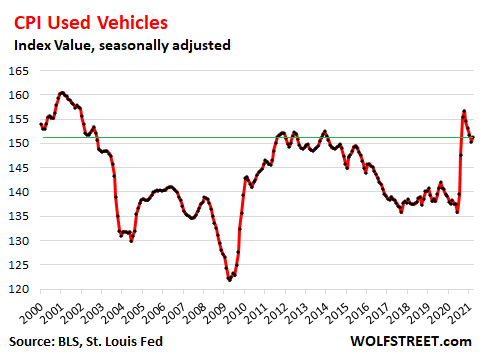 And there are more inflation pressures further up in the pipeline, as companies are reporting surging costs, and that they’re able to pass on those surging costs to their customers. Read… Producer Prices Blow Out