And I mean, not just by a little. The F150 XLT & Camry LE are at it again. My annual brain-twisting stunner.

They form the WOLF STREET “Pickup Truck & Car Price Index.” It’s not seasonally adjusted, and it’s free of “hedonic quality adjustments” and other methods that the government uses infamously to lower its “Consumer Price Index for New Vehicles.” It reflects price changes of the same model over the years, in their purest form. And when juxtaposed to the official CPI for New Vehicles, it turns into my annual brain-twisting stunner.

You cannot yet find a 2021 Camry LE in showrooms. Build dates start in mid-November, I was told. But higher-end 2021 Camrys are already out there.

Cars face dying demand in America. Ford, GM, Fiat Chrysler, and others have already dropped many of their car models. For example, Ford ended production of the Fusion in August. Automakers have switched production to trucks, SUVs, vans, and compact SUVs. Compact SUVs are based on car chassis and power trains but are a little higher and offer more space, and are more expensive than equivalent cars, and Americans love them, and automakers love them because they make more money on them. But the Camry has survived.

Hardly anyone pays MSRP. There are nearly always incentives by automakers and discounts by dealers. But this was also the case in 1990. The MSRP is set by the automaker at the beginning of the model year and doesn’t change for the model year. What changes are the incentives and discounts. But MSRP allows us to approximate year-to-year price changes. 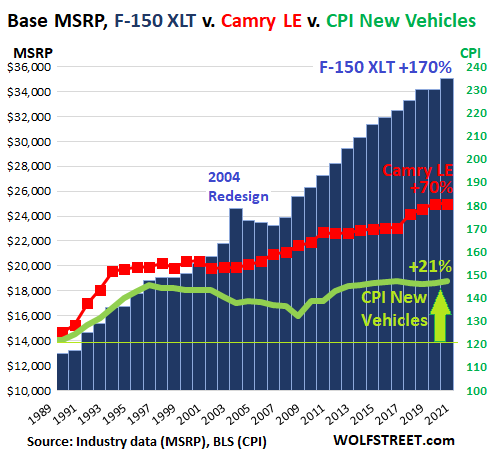 In the chart above, note how the CPI for New Vehicles from 1989 through 1997 roughly tracked the actual price changes of the vehicles. But then the calculation method was changed, and the CPI stopped tracking price increases, and in fact started showing price decreases until 2009.

To put the F-150 XLT, the Camry LE, and the CPI for New Vehicles on the same scale, I converted the data into “percent change since 1990.” This shows three things:

The 2021 Camry LE comes with Amazon’s Alexa, Apple CarPlay, and Android Auto. You might hate Alexa, but many Americans are in love with her and cannot imagine life without her. So now she is not only inside the bedroom but also inside the car.

The 1990 Camry LE didn’t even know who Alexa was. It had a four-speed automatic transmission instead of the super-duper electronic do-it-all 8-Speed Direct Shift ECT-i Automatic with sequential shift mode of today’s base Camry LE.

It has Hill Start Assist Control, which is sweet in San Francisco, when you’re stopped pointing up a hill that is so steep that you’re just looking into the sky, though it might be less useful in Illinois. It has Dynamic Radar Cruise Control, which allows you to use the cruise control in dense expressway-traffic as it adjusts to the speed and lane changes of vehicles in front of you. And it has lots of other features of modern vehicles.

The F-150 has made similar progress. The base engine is the 3.3L V6 with 290 hp and 265 lb.-ft. of torque. And it comes with a 10-speed automatic transmission. The truck has a long list of features that are similar to the Camry’s, in addition to some special truck features, such as towing capacity.

Vehicles today offer features, including safety features, and performance that their 1990 models couldn’t even dream of.

Which brings us to inflation.

How these costs of quality improvements are estimated determine how much of the actual price increases are removed from CPI calculations. And clearly, the BLS has gotten very aggressive in estimating and removing those cost, given that its CPI for New Vehicles has remained essentially flat since 1997, while the actual prices of new vehicles have soared. In reality, consumers have to pay the actual prices and they have to pay for the quality improvements whether they want them or not, and their life is getting more expensive, though that’s not fully reflected in CPI.

Just the Numbers. Read… Tesla v. GM v. Ford: Sacrilege to Mention Them in the Same Breath, But Here We Go