Tesla is a supernatural phenomenon led by a guy who walks on water, and it’s not manufacturing and retailing automobiles in a stagnating or declining industry, but its conjuring up miracles with wheels in a boundless universe. So I understand perfectly well that it’s a sacrilege to mention Tesla in the same breath with Ford and General Motors. But here we go, sacrilege and all, side by side, just the numbers, Tesla, Ford, and GM.

GM reported this morning that global revenues for Q3 were flat at $35.5 billion, on strong unit sales gains in China, and declining unit sales in the US, but with a shift to more expensive vehicles in the US. GM previously announced that third-quarter deliveries in China through its joint ventures had surged 12% from the dismal levels last year, to 771,400 vehicles (other automakers also reported big year-over-year gains in Q3 in China). In the US, GM’s deliveries in Q3 fell by 10% year-over-year to 665,000 vehicles, once again selling more vehicles in China than in the US.

The Comparison: Tesla, Ford, and GM. 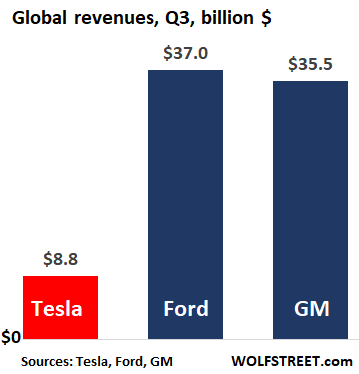 Net income attributable to common shareholders in Q3 at GM was 13 times Tesla’s; and Ford’s net income was 42% higher than Tesla’s: 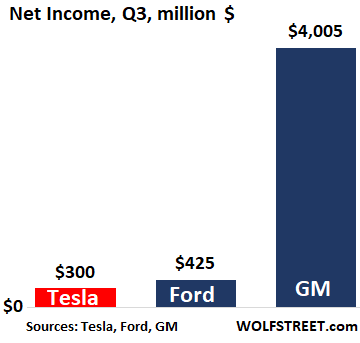 Earnings per share in Q3 at GM were over 10 times Tesla’s. Ford’s EPS were less than half Tesla’s: 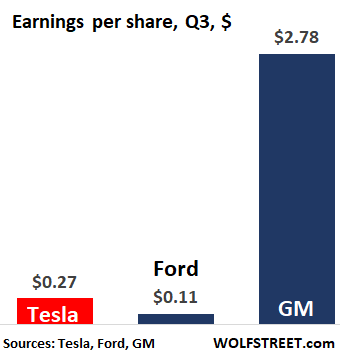 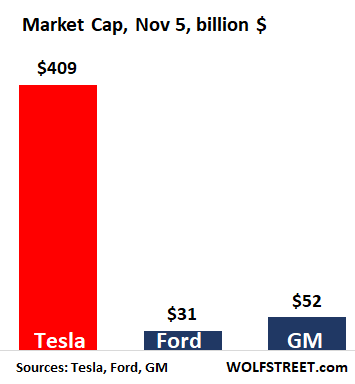 What this market-capitalization comparison shows is not that Ford and GM are somehow undervalued by a factor of 100 or whatever, but that Tesla’s share price is just ludicrously blown out of proportion.

Tesla made EVs cool, and it forced the legacy automakers to take EVs seriously. And now, after years of dilly-dallying around, they’re all taking EVs seriously.

EV sales is where the growth is in the overall declining delivery numbers. And these legacy automakers are now investing many billions of dollars each to design and build EVs. They’ve moved their brightest brains into the segment. Some of these EVs are already on the market, others are coming on the market.

The competition Tesla faces is growing and will get huge. Before it was just Tesla by itself, and if you wanted an EV, it would have to be a Tesla. Now it’s everyone, across the spectrum, from compact cars to pickup trucks.

In that respect, Musk has performed a miracle: He created an entire industry and forced legacy giants to get off their lazy butts and move. He has shaken them up. And now they’re moving.

To face this competition, Tesla has been cutting prices all year, which is pushing down EV prices globally. This just doesn’t happen with internal-combustion-engine (ICE) vehicles. They know only one way: price increases. With ICE-vehicle prices rising, and with EV prices falling, it doesn’t take long for the price advantage to shift to EVs – especially given their lower operating costs (juice and maintenance).

Tesla is now up against all the giants it has woken up – in addition to all the newcomers that are now fighting it out in China – the largest auto market and EV market in the world – and elsewhere.

Manufacturing EVs is cheaper and simpler than manufacturing ICE vehicles — with the battery being the exception. The ICE power train, fuel systems, coolant systems, lubrication systems, exhaust systems, the transmission, the emission control and engine managements systems, etc. are highly complex. And all that gets tossed out and replaced by electric motors, a battery, and the systems that control and manage them. Much of the braking is done by electric motors, which generate electricity in the process that charges up the battery, thereby reducing not only electricity consumption but also brake maintenance. The battery is the crux, but that technology is advancing in leaps and bounds, and is being commoditized.

Tesla is losing its status as trailblazer and is becoming just another competitor in an industry dominated by giants. Tesla created a fabulous brand (“Tesla”), and for people who like to buy fabulous brands, this is a pull. But for other car and truck buyers, it’s not a pull. What they want is a well-made, reliable, and all-around good vehicle, backed by competent and easily accessible service and availability of parts – which the giants have finely honed for decades.

For the Ultimate No-Growth Industry: price increases and pushing consumers into more expensive trucks and SUVs. Read… Sales of New Cars & Trucks Through October Fell by 2.4 Million Vehicles, to 1985 Levels. Back to the Future

177 comments for “Tesla v. GM v. Ford: Sacrilege to Mention Them in the Same Breath, But Here We Go”