The situation in the San Francisco housing market is getting increasingly curious. Even as there is a veritable land rush in many parts around the US, including in parts of the San Francisco Bay Area, San Francisco is now facing historic record high inventory of condos for sale, and sharp drops in condo prices. Inventory of single-family houses is also up and prices are mixed. 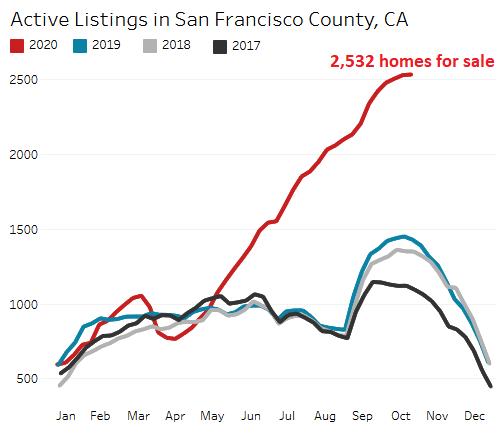 This inventory of homes for sale does not include the condos in new towers that developers are trying to sell through their own sales offices, following the construction boom. That supply of new condos is difficult to quantify since it isn’t listed, but it’s significant.

Condo prices are heading lower. According to the California Association of Realtors, in October the median price of condos in San Francisco dropped 12.8% year-over-year.

There have been numerous deals where condos sold below their prices from years ago. San Francisco real estate site SocketSite just reported on another such sale, unit #6G at the Lumina tower; it has now sold below its 2016 price. And it took over a year to sell it.

Tack on the closing costs on a $1.633 million deal, plus home owners association fees for over fours years, which Zillow lists at $1,216 a month, plus property taxes, and insurance, and pretty soon you’re talking about some real money.

With prices of single-family houses, the situation is more complex. House sales are strong, and accounted for about half of total sales, according to Compass. The median price of 3-bedroom houses ticked up 1% to $1.62 million in the three-month period through October, compared to a year ago. But for four-bedroom houses, the median price fell 3% to $2.12 million.

Sales volume has fully recovered from the collapse in April and May. Pending sales over the past four weeks were up 8.6% from a year ago, according to Redfin data. But inventory was up 77% from a year ago. And that’s the problem.

As we head toward the holidays, normally much of the inventory for sale would be pulled off the market, and then be relisted in the spring, so that there’s very little inventory listed for sale over the holidays, which gives the real-estate media opportunity for a few weeks to rave about the extreme “inventory shortage.”

This would be the normal seasonal pattern. But seasonal patterns have been disrupted this year, with the peak selling season in the spring getting wiped out by the Pandemic, and with inventory then pouring on the market when it shouldn’t have. Sales have picked up too in the fall when normally they would slow down going into the winter. But inventory will still get pulled off the market before the holidays. So we should see inventory decline over the next seven weeks.

Unemployment and work-from-home or work-from-anywhere are massively shifting where people want to live. Read… US Apartment Market Splits in Two, 100 Cities: Where Rents Jumped or Dropped the Most, Are Highest or Lowest