For the Ultimate No-Growth Industry: price increases and pushing consumers into more expensive trucks and SUVs.

In October, eight months into the Pandemic, new-vehicle sales in the US recovered roughly, or not quite, to last year’s October level, depending on how the estimate is done — now that we have to rely on estimates — but left the huge hole intact.

The Big Three US automakers stopped reporting actual monthly new-vehicle deliveries, starting with GM in 2018, and other automakers followed. Tesla never reported monthly US deliveries to begin with, only quarterly global deliveries. All automakers report quarterly US deliveries, except Tesla. So now the industry estimates how many new vehicles were delivered every month. Today, the Bureau of Economic Analysis came out with its estimates for October.

Deliveries in October, in terms of the Seasonally Adjusted Annual Rate (SAAR) fell 3.3% from a year ago to a rate of 16.2 million units. Unadjusted, and not an annual rate, deliveries in October ticked up 0.9% year-over-year to 1.34 million vehicles. This means the new vehicle market has returned to about where it had been before the crisis.

But here is the thing: The crisis – which in terms of new vehicle sales, occurred in March through August – dug a huge hole into deliveries this year: Over the first 10 months of the year, 11.65 million vehicles were delivered to customers. This was down by 17% or by 2.39 million vehicles, from the same period last year.

In other words, so far this year, automakers have sold 2.39 million fewer vehicles in the US than last year, and the return to “normal” left that hole intact.

Over the past 12 months combined, total deliveries dropped by 2.60 million vehicles, to 14.97 million units, compared to the same 12-month period in the prior year. The moving 12-month total deliveries show just how deep the hole has gotten, though it isn’t nearly as deep as it was during the long-drawn-out Financial Crisis that caused GM and Chrysler to collapse into bankruptcy. 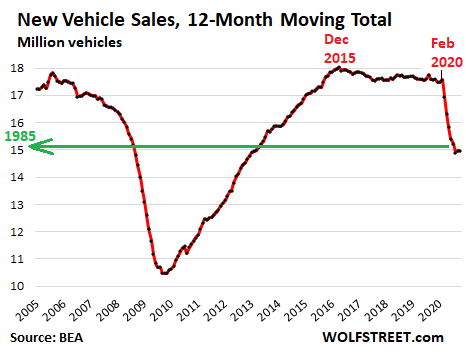 The peak year for deliveries was 2016. By 2019, deliveries were down 2.2% and were below the levels before the Financial Crisis, in what is the ultimate mature industry, where unit sales have been stagnating for over 20 years, interrupted only by two deep crashes.

What automakers have been doing to counteract the stagnation or decline in unit deliveries is switching customers from “cars” to more expensive trucks, SUVs, and compact SUVs, and by raising prices on all vehicles.

As a result, truck, SUV, compact SUV and van sales soared, even as “car” sales started declining in 2015 and have not looked back since – a phenomenon I termed “Carmageddon” – with the plunge only steepening during the crisis. During the 12-month period through October, just 3.52 million new “cars” were delivered, compared to 11.05 million new trucks, SUVs, compact SUVs, and Vans: 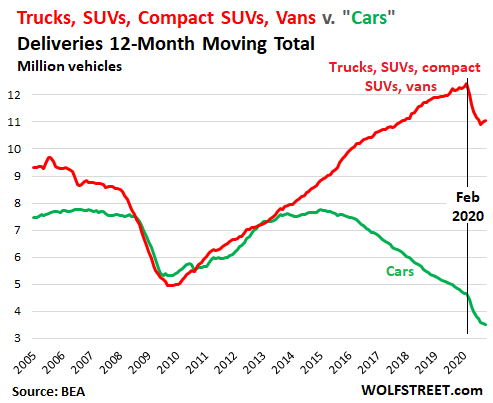 So this is what the recovery in the auto industry looks like:

Depending on how strong the recovery will be in November and December, the year 2020 will go down as the worst year in new vehicle sales – in the 15-million range – since either 2013 or 2012.

And as further food for thought on this ultra-mature industry where the only revenue increases come from price increases and a shift to higher-end units: The first time that new vehicle sales exceeded 15 million units was in 1985. Back to the future.

Mall REITs CBL and Pennsylvania Real Estate Investment Trust were both toast before the Pandemic. The banks are stuck. Read… What Took so Long? After Years of Brick & Mortar Meltdown Punctuated by the Pandemic, Two Mall REITs File for Bankruptcy

102 comments for “Sales of New Cars & Trucks Through October Fell by 2.4 Million Vehicles, to 1985 Levels. Back to the Future”