CBL and Pennsylvania Real Estate Investment Trust were both toast long before the Pandemic. The banks are stuck.

Two publicly traded mall landlords filed for bankruptcy on Sunday: CBL & Associates Properties and Pennsylvania Real Estate Investment Trust. Long before the filing, the shares of these REITs were reduced to near-nothing, and CBL’s unsecured bonds were totally trashed in 2019.

CBL Properties, which owns 107 properties with a total of 66.7 million square feet of space, in 26 states, announced this morning that “CBL & Associates Properties, Inc., CBL & Associates Limited Partnership (the “Operating Partnership”), and certain other related entities” had filed for Chapter 11 bankruptcy. On its balance sheet as of June 30, it lists total debt of $3.8 billion.

The REIT specializes in B and C malls, many of them serving less affluent areas. Its tenants have been closing stores for years, and CBL was a basket case before the Pandemic. During the Pandemic, the process of years was compressed into a few months, and some of its tenants that hadn’t already filed for bankruptcy then filed for bankruptcy, with  massive store closures, including Ascena Group (Dressbarn, shut down in December, Ann Taylor, LOFT, Lou & Grey, Lane Bryant, Cacique, Catherines, and Justice) and J.C. Penney.

CBL’s bankruptcy filing was well telegraphed. On June 5, CBL issued a “going concern” warning after it failed to make an interest payment on one of its unsecured notes. It then entered into a forbearance agreement with the “noteholders,” which kicked off discussions on restructuring this debt. On July 17, there were reports that CBL was preparing to file for bankruptcy. On July 22, CBL disclosed that it was able to extend the forbearance period as negotiations continued with the noteholders.  On August 18, it entered into a Restructuring Support Agreement (the “RSA”) with some of the noteholders.

Today, CBL said that noteholders representing over 62% of the principal amount of $1.37 billion of the three unsecured notes, due in 2023, 2024, and 2026, entered into the restructuring agreement. And now the company will seek to implement this restructuring agreement in bankruptcy court. These unsecured notes are all trading today in the range of 36 cents on the dollar.

The price of these notes had been dropping since 2017 when it became obvious that the brick-and-mortar meltdown was hitting CBL. In early 2019, they started collapsing. By the end of 2019, before the Pandemic hit, they were trading at 20 cents on the dollar as CBL’s fate – a default and bankruptcy filing – appeared sealed. Here are the 4.6% notes, due October 2024: 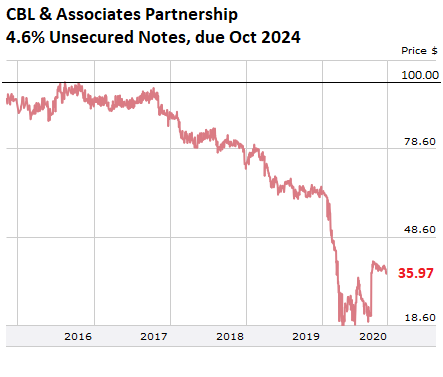 CBL expects that it will emerge from bankruptcy with $1.5 billion less in unsecured debt and preferred obligations, with noteholders getting equity in the restructured company, and with some debt maturities getting extended.

Negotiations with lenders over CBL’s secured credit facility are continuing, CBL said today, “in an effort to reach a tri-party consensual agreement between the Company, noteholders and credit facility lenders during the bankruptcy process.”

Shedding $1.5 billion of its debts will relieve the company of some of its debt burden – though it doesn’t reopen the shuttered stores on its properties. Current shareholders are left out in the cold and will likely end up with nothing or nearly nothing.

Trading in its shares [CBL] was halted this morning, but after trading resumed, shares plunged and are now down 40%, trading at 9 cents, giving the company a market capitalization of $18 million, having plunged from nearly-nothing all the way to next-to-nothing.

Pennsylvania Real Estate Investment Trust, the largest mall landlord in Philadelphia with 22.5 million square feet of retail space, including 19 malls, and $1.8 billion in debt at the end of Q2, announced on Sunday that it filed for a “prepackaged” Chapter 11 bankruptcy, under which it “will be recapitalized and its debt maturities extended.” Negotiations with its bank lenders had been going on for a while, and in October, the company announced that it had entered into a Restructuring Support Agreement with them.

As part of the agreement, the banks have committed to an additional $150 million in new loans, extend the debt maturities of existing loans, and modify other aspects of the loans. The company said that 95% of the creditors agreed to the restructuring agreement. Vendors, suppliers, and employees will be paid during the bankruptcy proceedings, and the pre-bankruptcy petition claims of its “suppliers and other trade creditors and business partners will be unimpaired,” the company said. So, if the court approves, everyone will get paid.

For shareholders, nothing will change, PREIT said, and it expects its common and preferred shares “to continue to trade in the normal course.” But they have already gotten mostly wiped out by the brick-and-mortar meltdown long before the Pandemic: For PREIT, 2020 will be at least the sixth year in a row of net losses.

Back in 2017, PREIT’s shares [PEI] were still trading in the $17 range. In February, before the Pandemic, they were in the $3.70 range. At the moment, they’re at 48 cents. The only surprising thing is how long companies can drag this out.

The banks are stuck. Clearly, the banks don’t want to clutter their balance sheet with a bunch of mall properties dotted with closed stores, shuttered movie theaters, and bankrupt tenants. Better to lend another $150 million, extend the dates when the loans are due, and pretend everything is just fine, while hoping for a miraculous solution to the brick-and-mortar meltdown.

152 comments for “What Took so Long? After Years of Brick & Mortar Meltdown Punctuated by the Pandemic, Two Mall REITs File for Bankruptcy”