But “seated diners,” another metric provided by OpenTable, has dropped to the worst reading since September 19, perhaps due to the surge in Covid-19 cases, with some cities – we’ll get to them in a moment – showing a pronounced decline. This metric represents the percentage drop of the number of people (walk-ins and those with reservations) who ate in restaurants compared to the same weekday in the same week last year. As of October 31, the seven-day moving average of “seated diners” was down 44.6% from the same period last year: 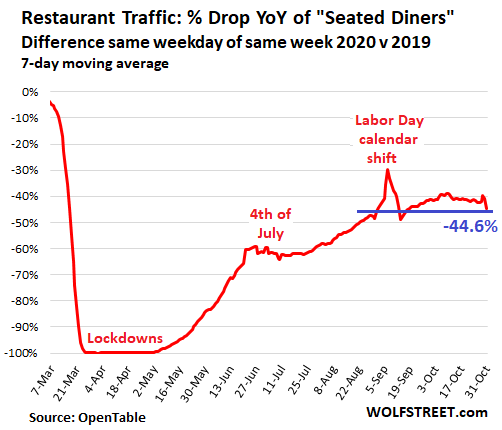 The reading of -100% in the chart above during the lockdowns in April means that the guest count had plunged to essentially zero because restaurants were closed.

OpenTable’s data on seated diners is based on a broad sample of 20,000 restaurants that shared that information with OpenTable.

Restaurants in most places have offered outside-dining for months. Inside dining is more restricted. In many places where inside dining is offered, it comes with limits, such as diners cannot exceed 25% or 50% of capacity, and the bar areas might be closed, which makes it tough to run a restaurant, even in survival mode.

With a large enough outside dining area – repurposed parking, adjacent public area, big sidewalks wrapping around the corner, or an entire street closed to traffic – the restaurant can do good business during nice weather.

I know some restaurants that now have more outside space than they’d ever had inside, and September and October being summer in San Francisco, did solid business. Other restaurants, such as those with narrow fronts and narrow sidewalks, cannot seat enough or any people outside to make up for capacity constraints for inside dining, and they remain closed for seated dining, though some do takeout. Many gave up altogether. Winners and losers – determined by sidewalk space.

On the demand side in San Francisco – and this is also the case in Manhattan, Honolulu, and some other cities – tourism has taken a huge hit, with international mass-tourism essentially shut down. In addition, an unknown number of workers have left San Francisco to work from anywhere, or they have left because they lost their jobs and cannot afford to live in the City on unemployment compensation. And thereby demand for restaurant dining has also been crushed.

Among the cities in the West and Hawaii for which OpenTable provides data, the seven-day moving average of “seated diners” is down the most in Seattle (-78%), San Francisco (-77%), and Honolulu (-77%), followed by Los Angeles (-63%) and Portland (-65%). Phoenix (-58%) has recently dropped to where it had been before Labor Day. Las Vegas (-30%), San Diego (-31%), and Denver (-38%) are the least bad-off, but seated diners at all three have declined recently to pre-Labor Day levels. Except for Hawaii, San Francisco, and Los Angeles, there hasn’t been any improvement over the past two months: 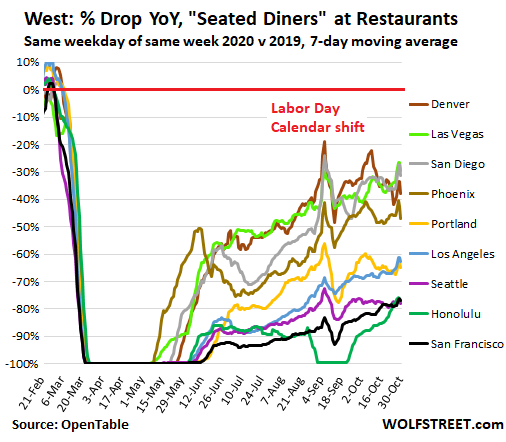 In the five major cities in the Midwest for which OpenTable provides data, the seven-day moving average of seated diners is still down between 52% in Cincinnati and 75% in Chicago. Note the strong improvement in Cincinnati over the past few months. But there has hardly been any improvement since the 4th of July in Chicago, Minneapolis, and Indianapolis: 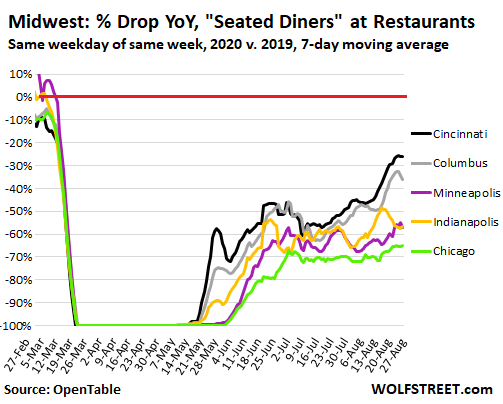 There has been a downturn in seated diners in all six cities on the East Coast for which OpenTable provides data, with the biggest downturn in Philadelphia, from the high in early October of -50%, to the low on October 31 of -71% (seven-day moving average). In New York City, the number of seated diners was down 79% from a year ago. At the top was Pittsburg (-57%). 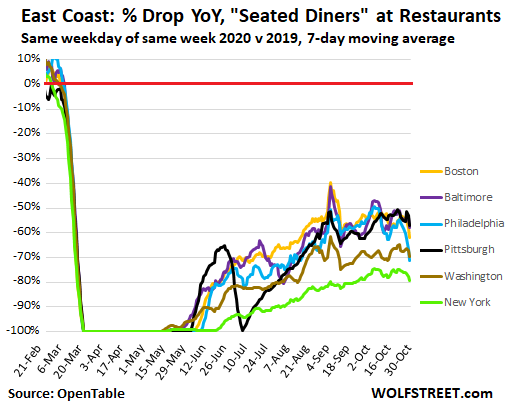 Cities in the South:

Among the 10 cities in the South for which OpenTable provides data, the seven-day moving average of seated diners topped in Tampa at -17%, the best reading of any of the cities covered here. At the other end is New Orleans, where seated diners are down 68% from a year ago. But all cities experienced deteriorating metrics recently, and there hasn’t been much or any improvement since before Labor Day: 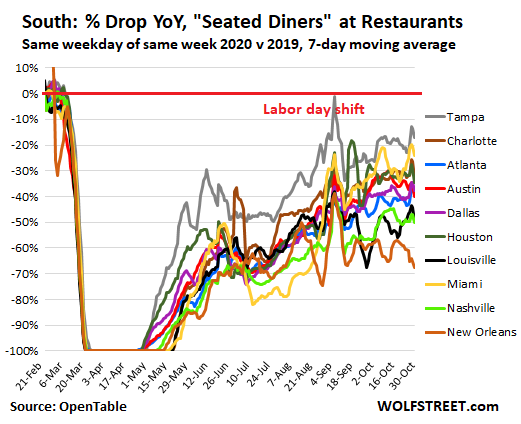 Eight months into the Pandemic, the restaurant recovery has gotten stuck. Outdoor dining is great, if the conditions are halfway right. Now the winter months are coming. This may make outdoor dining finally comfortable in Phoenix and some other cities in the southern part of the US, and they might see improvements in their out-door dining business to compensate for the capacity constraints on their indoor dining offerings.

But it can get decidedly uncomfortable in the northern cities, and outdoor dining will become a challenge on many days. Even in San Francisco, where temperatures might be still bearable over the winter on many days, there are challenges: Rainy season is coming (hopefully), and no one is going to eat outside in the rain. And that goes for outdoor dining anywhere: Reservations turn into no-shows once it starts raining.

Restaurants are experimenting with tent structures and big awnings and what not, and they’ve been buying patio heaters, which, like so many Pandemic items, are now in short supply. Ultimately, the conditions associated with winter weather may cause more restaurant owners in cities with cold or wet winters to throw in the towel.

178 comments for “The State of American Restaurants, by City, November Update”