Investors bet on this outcome for years. Covid-19 just sped it up by a few months. Department Stores Are Toast.

I’m in awe of how long these publicly traded companies with access to hyperventilating capital markets can hang in there and burn cash and ruin their brand and drive away their customers, and make expense-cutting their business model, and present this expense-cutting to investors to get more cash to keep the charade going, over and over again, before finally investors refuse to throw good money after bad. And then it still takes nearly forever before these companies can’t breathe any longer, by which time their brand has been turned into a liability suitable only for hanging on a scarecrow.

Yup, it finally happened. J.C. Penney announced Friday afternoon that it had filed for Chapter 11 bankruptcy protection, after nine years straight of net losses, totaling $4.5 billion. Its revenues plunged from nearly $20 billion in fiscal year 2006 to $10.7 billion in its last fiscal year ended March. Now its stores are closed, and when the stores reopen, it will be closing more stores permanently, and there will be even fewer customers. And sales this year will collapse, to perhaps less than half of the $10.7 billion (red arrow): 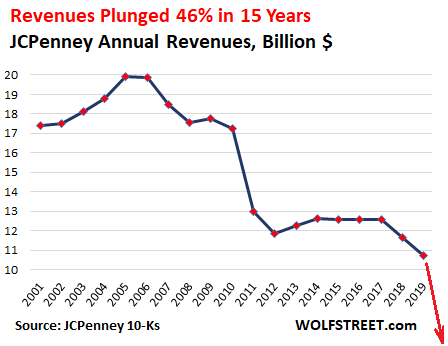 Another once-iconic American department store, and once the second-largest catalogue business behind Sears, after decades of ruining itself and failing to get on top of the ecommerce wave, is telling its shareholders, second-lien bondholders, and unsecured bondholders to go take a hike. They already got mostly wiped out before the filing.

This is a “pre-packaged” bankruptcy. The company said that it had come to an agreement with about 70% of its first-lien creditors. These are mostly distressed debt funds, hedge funds, and PE firms that bought this first-lien debt for cents on the dollar, expecting a debt restructuring and bankruptcy would allow them to exchange this debt for equity and new debt in the restructured company to then be unloaded to others while the unloading is good, before JCPenney files for bankruptcy a second time to be liquidated.

Part of the deal is a $900 million debtor-in-possession (DIP) loan – “which includes $450 million of new money,” the company says – from these first-lien debt holders. This and the $500 million in cash the company says it still has will get it through the bankruptcy and restructuring process with its trashed brand and irrelevant ecommerce presence.

As part of the deal, JCPenney “will explore additional opportunities to maximize value, including a third-party sale process.”

Shareholders have long been wiped out by the collapse in the price of the shares to the $1-range in December 2018. They closed at 16 cents after hours on Friday. And they will be left out in the cold as the first-lien holders and other creditors will likely get most of the restructured company. Everyone knew this was coming. Covid-19 just compressed the process and forced the company to get it over with. 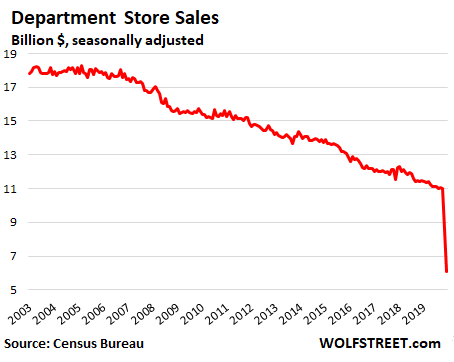 The company had $3.8 billion in long-term debt and $2.7 billion in future minimum payments of non-cancelable operating leases, for a total of $6.5 billion according to its annual report. The bankruptcy restructuring will likely make the funds that bought the first-lien debt at cents on dollar some money. The others in this group will get short-changed, including landlords with their non-cancelable leases that will have more empty spaces in their zombie malls.

JCPenney has been shrinking itself to death for years. The store count plunged from 1,560 stores in 2002 (1043 department stores plus outlet stores and catalogue sales centers) to 846 stores as of February 1, 2020, with many more stores to be closed permanently post-Covid.

This has been a long-drawn-out process. JCPenney has been on the list of bankruptcy candidates for years. In July last year, I wrote: I’m in Awe of How Long Zombies Like J.C. Penney Keep Getting New Money to Burn. But Bankruptcy Beckons

Covid-19 just forced the company to finally get this over with a few months before it would have had to do it anyway. The funds that bought its distressed debt for cents on the dollar some time ago had no idea Covid-19 would be coming, but they knew a bankruptcy filing would be coming, and those that sold that first-lien debt for cents on the dollar to them also knew it.

Some of its bonds were trading at distressed levels (80 cents on the dollar or less) since August 2018, for example this $400 million second-lien note, issued in March 2018 at around 100 cents on the dollar plunged to 68 cents just five months later in August 2018. The last time it traded (Wednesday), it was at 8 cents on the dollar. Clearly these investors expect next to no recovery in the bankruptcy process (chart via Finra-Morningstar): 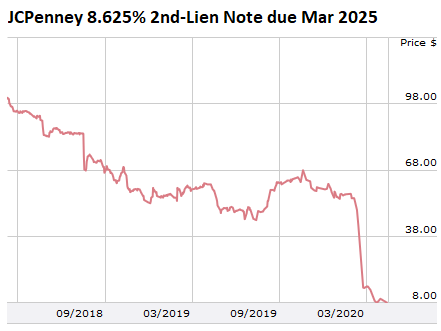 So blaming Covid-19 for the bankruptcy is nonsense. Investors have bet on this path and outcome for years, as documented by the price evolution of the stock and the bonds. Covid-19 just sped it up by a few months.

Years of brick-and-mortar meltdown get compressed into a few months. But ecommerce is booming. Read... Here’s What Collapsed, Spiked, or Hung On in 12 Charts of Retail Sales (Yes, Department Stores Were Already Toast)

139 comments for “Zombie J.C. Penney Finally Files for Bankruptcy, in Deal with Distressed Debt Funds. Stock and Some Bonds Wiped Out”