In 2013, I called Goldman Sachs a “snake-oil salesman” for underwriting a $1 billion J.C. Penney stock offering. Investors got wiped out. Now the longer-dated bonds, including a 100-year bond, have collapsed.

J.C. Penney, which just took another step toward what will eventually be a bankruptcy filing and likely liquidation of the company, can be summarized this way:

But even after a debt restructuring, a zombie like J.C. Penney is likely to fail a year or two later. Retailers are notoriously difficult to restructure. Most of them end up getting liquidated. When a storied brand like J.C. Penney fails, it’s not because of one slip-up, but because of years or even decades of mismanagement and failure to adapt to a changing environment – and thereby killing the brand.

What is surprising is not that this is happening. Department stores have been getting totally crushed by e-commerce. Chains, including the biggies Sears and Kmart, and Bon Ton Stores, that didn’t successfully make the transition, have already been dismembered as part of the brick-and-mortar meltdown.

But I’m in awe of how long zombie companies like J.C. Penney keep getting fed new money by investors believing in Wall Street hype and then getting ripped off.

So here is the J.C. Penney example of how Wall Street entities, in this case Goldman Sachs, have conspired with the company to rip off investors. Back in 2013, when I was still fairly new with my financial website and was still using angry but technically correct terms that I might not use today in my now kinder and gentler manner, I wrote an article –  “J.C. Penney And Goldman: Lies, Scams, And Rip-Offs” – that started out this way:

Why would anyone buy this crap? No, not the clothes in J.C. Penney’s stores – which practically no one is buying – but the shares it just sold.

Tsk, tsk, tsk, wash out your mouth with soap, Wolf… And then this:

It hired Goldman Sachs as underwriter – snake-oil salesman would be a more appropriate term – and offered to sell 84 million shares at $9.65 per share and granted Goldman a 30-day option to buy up to 12.6 million more shares, for a total of 96.6 million shares. The deal would raise up to $932 million.

The stock offering was planned in all secrecy. And the day before the announcement of the share sale, and in order to pump up the share price ahead of it, CEO Myron E. Ullman III, fully involved in the share sale the next day, said that he didn’t foresee a situation this year where “we’d need to raise liquidity.”

Yup, in September 2013, J.C. Penney, with the help of Goldman Sachs which got richly paid for this, was able to extract by hook or crook nearly $1 billion from new investors via a share offering at $9.65 a share. This money from new investors bailed out old investors and kept the zombie alive, allowed it to refinance its maturing debts in subsequent years, and allowed it to lose the remainder of the above-mentioned $5 billion.

But investors who bought those shares during the misbegotten stock offering in September 2013 didn’t have to wait all that long before they got cleaned out. Their investment is down 91%.

Moody’s rates J.C. Penney Caa3, just a couple of notches above default (my plain-English cheat-sheet of corporate credit rating by S&P, Moody’s, and Fitch). News of the debt restructuring will likely cause Moody’s to perk up its ears. A debt restructuring, even outside of bankruptcy court, is generally considered an event of default.

J.C. Penney has been having discussions with restructuring specialists – lawyers and investment bankers – for weeks, “some of the sources” told Reuters. One of the sources said that the restructuring discussions are at an early stage. The goal is finding ways to restructure debt and raise new money to bail out old investors. This would keep the zombie alive a little longer. Creditors will be motivated by the threat of a bankruptcy filing hanging over their heads, and they get to choose.

In terms of the bonds that form part of J.C. Penney’s $4 billion in long-term debt, there is a slew of stuff out there, some wild stuff too.

For example on the wild side, in 1997, J.C. Penney was able to sell $500 million of 100-year unsecured bonds, paying a coupon interest of 7.625%. These things have collapsed, now trading at 22.5 cents on the dollar, according to Finra data. This means that investors figure that there is only a small chance of the company ever making it past 2022. The yield is 33% at today’s price, and if you buy at this price, and if the company manages to make interest payments for two or three years, and you get a little recovery in bankruptcy, those bonds might be a great deal. If not, well… 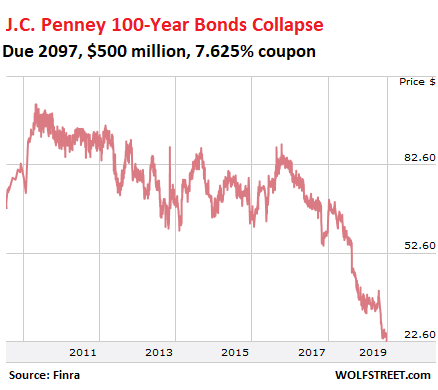 Then the company has five-year notes of $400 million, issued in 2014. Of that, only $50 million are still outstanding, and they’re coming due on October 1, 2019. Investors are certain the company will be able to make it that far and pay off the note with cash it has on hand. It’s currently trading at 99 cents on the dollar: 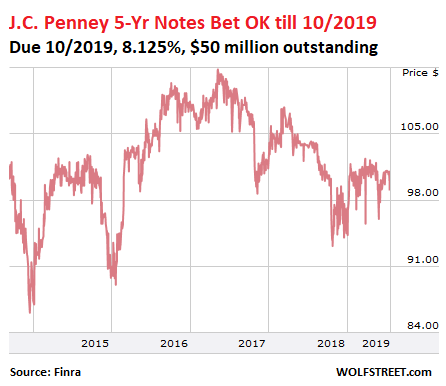 In 2007, J.C. Penney sold $700 million of 30-year unsecured bonds, with a coupon of 6.375%. Of those bonds, $388 million are still outstanding. They have collapsed, and now trade at 21 cents on the dollar, which gives them a yield of 31%. Investors who buy today are calculating to receive two or three more years of interest payments, plus some small recovery in bankruptcy, and then après moi le déluge: 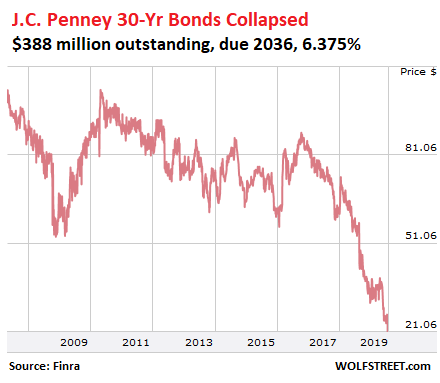 In 2010, the company sold $400 million of unsecured 10-year notes with a coupon of 5.65%. Of that, $110 million are still outstanding, which are due in June next year. Those bonds have gone through some wild gyrations late last year and this year, as investors were weighing the chances that the company would make it through June 2020. They’re currently trading at around 93 cents on the dollar, indicating that investors are pretty sure, but not certain, those bonds will be redeemed at face value on the maturity date, but a month ago, they were less sure, and bonds traded as low as 80 cents on the dollar: 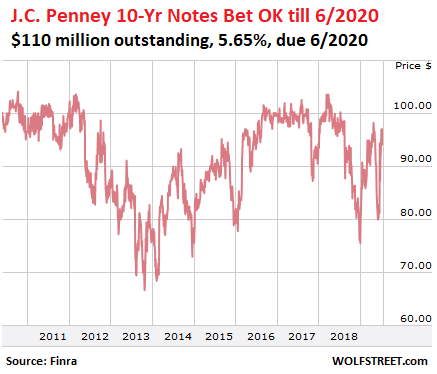 Stock investors have essentially been wiped out, and the remaining $280 million in market value will be mopped up too. Bond investors are giving the company a very limited lifespan — if all goes well, a couple of years maybe. So that might be 2021 or 2022 in a best-case scenario, during which time the company will continue to eat up investor money.

But this was clear in 2013, when I wrote the article, and we’re now six years further into it, and it’s still moving down the same path toward the inevitable, and it has gotten a lot closer to the inevitable, within smelling distance really, and investors have lost a lot of money, and yet they’re are still thinking about feeding the zombie with new money to keep it limping along a little while longer.

Kudos to the private equity firm. These things don’t happen overnight for companies. They happen overnight only for investors. Read...  Everything’s Fine Until Suddenly it Isn’t: How a “Leveraged Loan” Blows Up

96 comments for “I’m in Awe of How Long Zombies Like J.C. Penney Keep Getting New Money to Burn. But Bankruptcy Beckons”