First the Global Financial Crisis, then the Euro Debt Crisis, now the Big One.

In its 21 years of official existence, the Eurozone has already been through two brutal crises — the Global Financial Crisis and one of its own doing, the Euro Debt Crisis — that nearly tore the bloc apart. Now, it is in the grip of another one that is already exacting a larger toll than the first two, despite having barely begun.

The preliminary GDP in the first quarter for the Eurozone fell by 3.8%, according to Eurostat’s flash estimates (for the entire EU, it fell by 3.5%), “the sharpest declines observed since the time series started in 1995,” Eurostat said. This is despite the fact that most of the region’s lockdowns did not begin until mid-March: 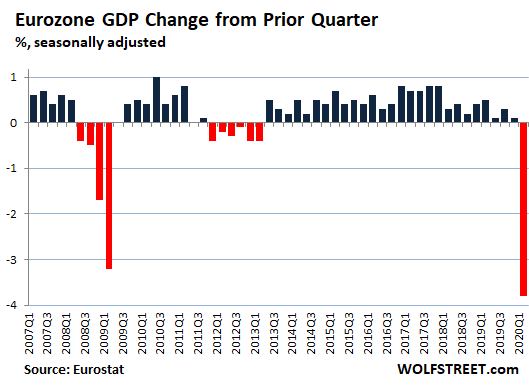 All things considered, the Euro Area’s biggest economy, Germany, got off relatively lightly. It shrank by just (!!) 2.2% compared to the previous quarter. It was still its biggest contraction since the the Global Financial Crisis, more than a decade ago. German industrial production was particularly hard hit, tumbling by 11.6% year-on-year in March, when the lockdown forced factories to close. In Q4 2019, Germany’s GDP growth rate was already negative (-0.1%).

But many other Euro Area countries fared a lot worse. Of the four worst performing economies, three are the bloc’s second, third and fourth largest, France, Italy and Spain, which between them account for almost 45% of Euro Area GDP. The other was Slovakia. Spain, Italy and France suffered more cases of Covid-19 and resulting fatalities than any other countries in the Euro Area. They also imposed the most draconian lockdowns. The impact on their economies has been brutal.

France suffered a mind-watering 5.8% collapse in GDP in the first quarter, the “biggest drop” on a quarterly basis since the Second World War,  according to the country’s INSEE statistics agency. Even in the second quarter of 1968, when France was roiled by civil unrest, mass student protests and general strikes, the economy still shrank by less (5.3%) than it just did. In the first quarter of 2009, when the financial crisis was pummeling Europe’s markets and Greece was beginning to teeter, France’s GDP shrank by a comparatively mild 1.6%.

Italy perennially troubled economy shrank by 4.7% in the first quarter — the worst reading since Eurostat began tracking Italy in 1995 — after having already contracted by 0.3% in Q4 of 2019. Italy was the first EU country to impose a lockdown and has also suffered the largest number of Covid-19 deaths. Given the size of its public debt and the fragility of its banking system, it is probably the least well placed large European economy to weather the current economic storms.

The Euro Area’s fourth biggest economy, Spain, also broke records with its latest GDP reading. Clocking in at -5.2%, it was the worst performance since the country began tracking economic growth in the 1970s and is considered to be the largest quarterly drop in economic activity since the Spanish Civil War, in the late 1930s. According to Spain’s National Statistics Institute (INE), retail trade slumped by 15% in March while Spain’s second largest bank, BBVA, estimates that consumption has fallen by half since the government declared a state of alarm on March 14.

Spain already had depression-era levels of unemployment before this crisis even began. In the first three months of this year unemployment rose to 14.41%, from an 11-year low of 13.78% in the previous quarter. Given the speed of the slowdown and the scale of economic destruction it has already caused, particularly in the all-important tourism sector, it’s probably just a matter of time before that figure surpasses the 20% threshold for the fourth time in 36 years (chart via TradingEconomics): 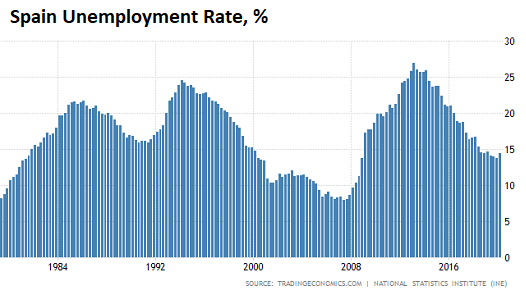 Across the Euro Area as a whole, the number of employed people decreased by 0.2% in the Eurozone in the first quarter of 2020, compared with the previous quarter, according to Eurostat. It is the first decline in the time series since the second quarter of 2013, when the region began to finally emerge from the ravages of the Euro Debt Crisis but it is still a surprisingly low figure given what has happened.

Unlike the U.S., in most Euro Area economies the vast majority of so-called “non-essential” workers have been furloughed rather than laid off. In the case of France, more than 10 million private-sector workers are being supported by the state, through a scheme called chômage partiel (partial employment). In the case of Italy, the unemployment rate bizarrely fell to 8.4% in March – its lowest level for almost nine years. The government attributed this aberration to the fact that the unemployment rate measures active job-seekers, whose numbers slumped during the lockdown.

But this sort of aberration will not last for long. Even though we are beginning to see some easing of the lockdown restrictions, it’s likely to be too little, too late for many businesses, particularly those in the hardest hit sectors such as transportation, retail trade, leisure and hospitality, which are so vital to Southern European economies.

To keep its own domestic economy alive, Germany has mobilized €750 billion in grants and loan guarantees to companies, both large and small. But few EU countries have Germany’s fiscal firepower or bureaucratic efficacy. Certainly, Spain and Italy don’t. In Spain, just 20% of small companies that have requested emergency loans have actually received them. In Italy, the government has pledged a whopping €740 billion in crisis funds — just €10 billion less than Germany — but as of the end of April, only €3.1 billion of those funds had actually been released.

As long as this dynamic continues, the prospects for Spain and Italy, two economies that are still living with the hangover from the last crisis, are beyond bleak. France is not looking much better. As such, if first-quarter GDP for the Euro Area was already woefully bad, the reading for the second quarter — what we are in the middle of right now — is likely to be much worse. By Nick Corbishley, for WOLF STREET.