It will likely take “several years before the output lost due to the virus outbreak is fully regained.”

“At this stage, we can only tentatively map out the scale and gravity of the coronavirus shock to our economies. While the immediate fallout will be far more severe for the global economy than the financial crisis, the depth of the impact will depend on the evolution of the pandemic, our ability to safely restart economic activity and to rebound thereafter,” the European Commission said in its Spring 2020 Economic Forecast.

The data on services and manufacturing now emerging from the Eurozone is in fall-off-the-cliff mode. This is particularly the case for the service sector – finance, insurance, health care, professional services such as technology, lawyering, or architects, but also transportation, tourism, bars, etc. – has collapsed in spectacular and gut-wrenching fashion.

The IHS Markit Services PMI for the Eurozone collapsed from an all-time historic low in March (26.4) to a catastrophic 12.0 in April. Note the cute little dimple of big-bad Financial Crisis 1, that had bottomed out at 39.2 (below 50 means contraction): 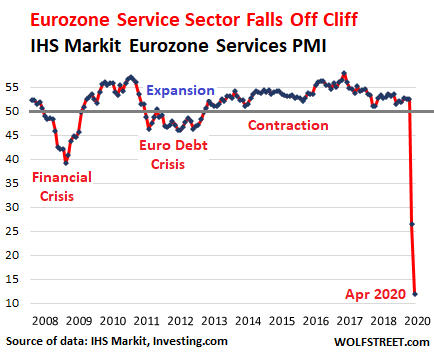 The service sectors of Italy, Spain, and France collapsed by the most – the countries with the most draconian lockdowns, where people were essentially cooped up at home for weeks, in response to some of the worst outbreaks of The Virus. The IHS Markit Services PMI by country:

Italy to 10.8: Driven by a collapse in new orders. The report for Italy said: “Amid the considerable contraction in client demand, firms reduced staffing levels further, with the rate of job shedding the sharpest on record.”

France to 10.2:  The report for France pointed out that the executives in the survey “often associated lower output with the temporary closure of their business amid lockdown measures.”

Spain to 7.1: New orders collapsed. Tourism collapsed. The report for Spain said: “Firms were deeply concerned about not only current conditions, but prospects,” with negative expectations about activity over the next year dominating.

In Germany, by far the largest economy in the Eurozone, the lockdowns were less severe than in Italy, Spain, and France, but were similar to California’s lockdowns, with people being encouraged to go outside to exercise (but with social distancing, etc.) and the like. The IHS Markit Services PMI for Germany collapsed to 16.2.

“With many businesses temporarily closed, and demand stifled by a wait-and-see attitude among consumers and firms alike, inflows of new work across the German service sector fell sharply in April,” the report said. Also note the cute little dimple during Financial Crisis 1: 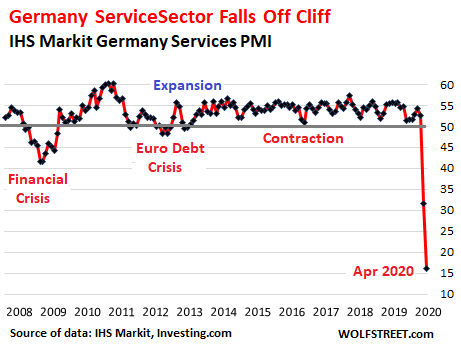 Manufacturing activity also plunged across the Eurozone in a cliff-dive manner. The IHS Manufacturing PMI for the Eurozone: “Output, new orders, export sales, and purchasing activity all fell at record rates, whilst supply side constraints intensified to an unprecedented extent. Confidence about the future sank to a fresh series low.”

But unlike the Eurozone Services PMI, the Manufacturing PMI has not yet annihilated the low of Financial Crisis 1, but in April merely eked out a new record by a hair, with a new low of 33.4: 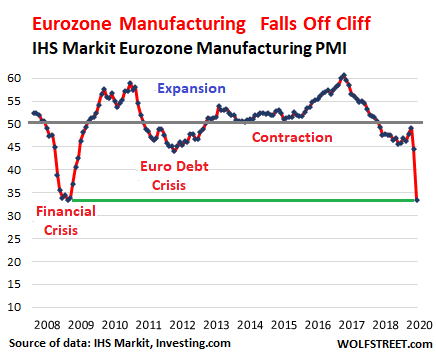 In some countries, the IHS Manufacturing PMIs in April haven’t taken out their Financial Crisis lows, but in other countries, the PMIs plunged to new record lows:

In Germany, whose economy is heavily dependent on manufacturing, and on exports of manufactured goods, the IHS Manufacturing PMI for April dropped to 34.5. This was 2.5 points above the low in December 2008 during the Financial Crisis. 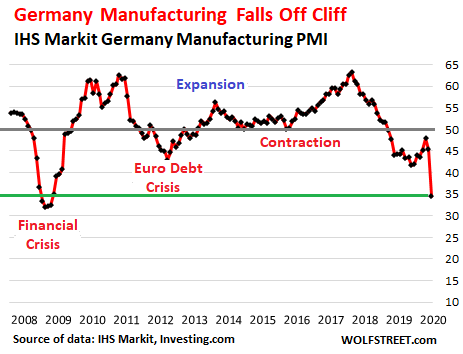 In terms of jobs, it’s also getting ugly, though within the rules of the German labor market: “The pace of staff cuts across the manufacturing sector gathered pace in April, reaching the quickest seen since May 2009. Alongside reports of redundancies, reduced contractor numbers and natural wastage, there were also frequent mentions of the use of short-time working [Kurzarbeit, a form of reduced hours, subsidized by the government] to avoid job cuts.”

For the Eurozone overall, as countries are beginning to ease the lockdowns and allow for more economic activity, governments “juggle between reviving economies and preventing a second wave of infections.” In this scenario, “most companies will inevitably need to work at levels well below full capacity and sectors such as retail, travel, tourism and recreation – already the hardest hit – will continue to be badly affected by social distancing.”

As economies are gradually climbing out of the hole, IHS Market expects that it will likely take “several years before the output lost due to the virus outbreak is fully regained.”

28 comments for “Service Sector Falls Off Cliff in the Eurozone, Manufacturing Not Far Behind”