After years of brick-and-mortar meltdown, the Pandemic. Desperate measures are now required.

Simon Property Group and Brookfield Property Partners obtained approval from bankruptcy court this week to buy the retail and operating assets of J.C. Penney, which had filed for bankruptcy in May. Simon is the largest mall REIT [SPG] in the US. Brookfield Property Partners is an entity of Brookfield Asset Management, a huge complex Canadian asset manager and PE firm with numerous entities. Brookfield Properties became a huge mall landlord after it acquired in 2018 the mall REIT GGP, the second-largest mall landlord in the US. In 2010, after General Growth Properties, as it was known, had filed for bankruptcy, Brookfield provided funding in return for an equity stake. In 2018, when GGP was wobbling back toward bankruptcy, Brookfield bought the remainder of the REIT for $15 billion.

But shopping for the type of merchandise sold at malls has massively shifted to online platforms, including the online platforms of the mall retailers, such as Macy’s, one of the top 10 ecommerce sites in the US. No group has been hit harder than brick-and-mortar department stores, which form the essential anchors at malls. This started 20 years ago, when department store sales peaked. From December 2000, sales dropped 45% by February 2020, after a series of department store bankruptcies that included #1 department store chain Sears Holding. By September 2020, sales were down 48% from that peak: 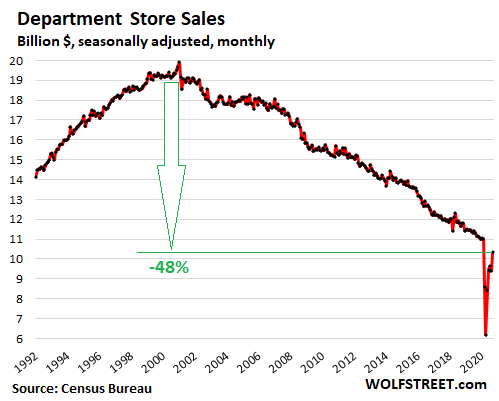 So now, Simon and Brookfield, as well as other mall REITs, are buying retailers out of bankruptcy court to keep the stores open so that they can pay rent and fill the otherwise vacant space, and create some foot traffic and attract a few shoppers for the other stores, so that they too can keep paying rent, and keep the mall from turning into another zombie mall.

If Simon and Brookfield hadn’t stepped in, J.C. Penney might have been liquidated. This would have caused the loss of the 60,000 or so remaining jobs and the closure of about 650 remaining stores – down from about 90,000 jobs and 800 stores before it filed for bankruptcy.

Without anchor stores, there won’t be enough foot traffic to keep the other stores open, and one after they other they’ll close. This has happened many times before the Pandemic, and the Pandemic is speeding up the process. Each one of these J.C. Penney stores needs to stay open and attract shoppers to keep the mall alive.

Sparc, a joint venture between Simon and Authentic Brands – in which PE firm BlackRock became the largest investor last year – has already acquired other collapsed retailers, including Brooks Brothers, Forever 21, and Lucky Brand. Authentic Brands has a portfolio of over 50 brands. November last year, it bought some pieces of Barneys New York out of bankruptcy.

The idea now is to get some of those brands into some of the stores, including J.C. Penney – and people will come, or whatever.

Simon is focused on A malls in the best locations, and has weathered the multi-year pre-Pandemic brick-and-mortar meltdown better than other mall landlords. Some mall landlords have already filed for bankruptcy, including two mall REITs last Sunday: CBL & Associates Properties and Pennsylvania Real Estate Investment Trust. And things are getting tough even for Simon.

On Vaccine Monday, SPG’s beaten-down shares surged 27.9%. But then Simon reported quarterly results, which were rough. Revenues had plunged 25% in the third quarter, and occupancy had dropped to 91.4% on September 30, down from 94.7% a year earlier, and the lowest in many years. By Wednesday, SPG had given up nearly half of the Vaccine Monday gains.

Buying your own collapsed tenants out of bankruptcy, when their entire business model has been under withering attack for two decades – even ignoring the Pandemic for a moment – has the aura of desperation to keep the stores open that would otherwise close and empty out the mall.

In a way, short term, that’s a good thing: Retain some of the jobs, keep occupancy rates from spiraling down, and keep the malls from turning into zombies.

But even Simon cannot get Americans to abandon ecommerce. This is a structural shift of how Americans shop. Mall retailers are the bull’s eye of what ecommerce is targeting. The damage started years ago. I have been documenting the brick-and-mortar meltdown at least since 2016. This structural shift isn’t a new development, though mall landlords have publicly pooh-poohed that phenomenon every step along the way.

Simon has already shed some malls, including sending jingle mail to creditors. For example, Simon walked away from the mortgage of a 1-million-square-foot super-regional mall in a suburb of Kansas City, MO, the Independence Center. When the mall was sold in a foreclosure sale in April 2019, it generated a loss of $150 million for commercial mortgage-backed securities investors. Trepp, which tracks CMBS, called it “the largest loss ever incurred by a retail CMBS loan.” This was just part of the regular brick-and-mortar meltdown and preceded the Pandemic by a year. And now the process – including jingle mail – has accelerated.

113 comments for “Why Simon Property Group & Brookfield Property, #1 & #2 Mall Landlords, Bought J.C. Penney and Other Collapsed Retailers out of Bankruptcy”