The curious effect of the election and now possibly the surge in virus infections.

This morning, Southwest Airlines reported operational data for October and updated projections for the rest of the fourth quarter. It looks like the already miserably tepid recovery of the airline passenger business has stalled. Shares [LUV] are down 3.1% at the moment.

This 65% drop in revenues, and the more somber outlook, roughly matches the curious backsliding in passenger traffic that the TSA has been reporting recently. The numbers of passengers entering secured areas at US airports, as measured by daily TSA checkpoint screenings, compared to the same weekday in the same week last year is now down about 66% from a year ago (7-day moving average), from the -62% range at the end of October. Note the backsliding in early November and the absence of a bounce-back since then. 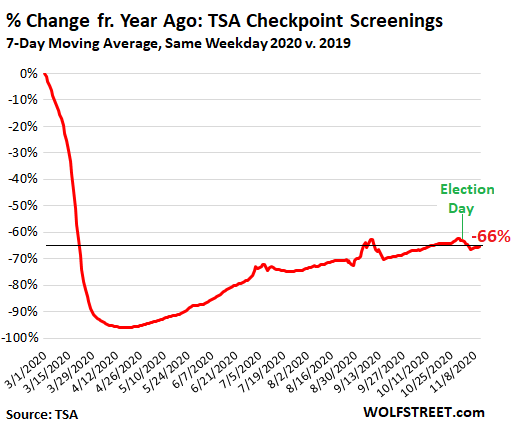 The recent drop in the chart above began at the end of October, just before the election. As expected, on Election Day, given the big voter turnout, passenger traffic fell further. Checkpoint screenings were down 71.3% compared to the same weekday in the same week last year. But as not expected, traffic hasn’t recovered, and over the past few days, has edged down further, with checkpoint screenings Monday through Wednesday this week respectively -66.1%, -72.3%, and -67.4%.

In terms of the number of passengers, it is clear what is not happening: normal seasonal increases and decreases. These seasonal variations in passenger traffic have largely been upended this year. Traffic has been more stable, but at much lower levels. The chart below shows the number of people who passed through TSA checkpoints per day through November 11 (seven-day moving average; 2020 = red line; 2019 = black line): 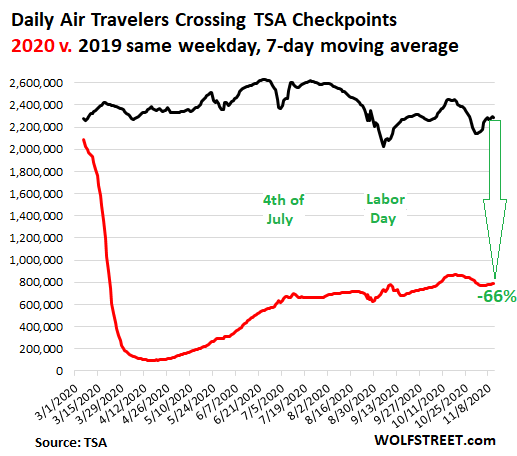 “The Company has experienced a deceleration in improving revenue trends for November and December 2020 in recent weeks.

“While the Company expected the election to impact trends, it is unclear whether the softness in booking trends is also a direct result of the recent rise in COVID-19 cases.

“As such, the Company remains cautious in this uncertain revenue environment.”

Southwest “continues to plan for multiple scenarios for its fleet and capacity plans,” it said. And yes, it will be selling middle seats again starting on December 1.

Southwest’s daily cash burn – the newfangled airline metric born out of the Pandemic – was about $10 million per day in October, an improvement of its prior estimate of about $12 million. And it estimates that daily cash burn in the fourth quarter will be about $10-$11 million.

Southwest isn’t going to run out of cash for a while. It has already raised about $19 billion so far this year through debt issuance and sale-leaseback of some of its planes ($13.4 billion); a common stock offering ($2.2 billion); and the government bailout Payroll Support Program ($3.4 billion). As of November 10, it still had $13.6 billion in cash and short-term investments.

And Southwest can borrow more, it said. It has about $10 billion in planes and $2 billion in other assets – such as spare engines, ground equipment, and real estate – that have not yet been pledged as collateral. And it can still pledge its loyalty program, Rapid Rewards, as collateral, a method by which airlines raised many billions of dollars, including Delta which raised $9 billion by pledging its SkyMiles program as collateral.

Delta on a similar track.

Two days ago, at an investor conference, Delta Air Lines said it expects its total revenues in the fourth quarter to fall by 65% to 70% from a year ago. Delta has been hit harder than Southwest due to it its international routes, where traffic is down much more than domestically.

And it expects to cut capacity by 40% to 45% from a year ago. Unlike Southwest, Delta is continuing to block the middle seat “through at least January 6, 2021,” it said in a press release on November 9, to encourage people to fly.

Delta estimated that daily cash burn will be in the $10-$12 million range in the fourth quarter. And it expected to have about $16 billion in cash left at the end of the quarter.