We’re going to be awash in huge and even absurd percentage-growth numbers.

Today, the New York Fed released its latest Weekly Economic Index (WEI), one of the high-frequency measures that came out of the crisis. The index is based on ten daily and weekly indicators of real economic activity, compared to the same time last year, and is scaled to line up with year-over-year GDP growth. Last year, it fairly accurately predicted GDP growth, I mean plunge.

In Q1 2020, GDP had dropped sharply, and in Q2 2020, it plunged. The year-over-year growth rate of the upcoming GDP report compares the dollar GDP in Q1 2021 to that of Q1 2020. Given the sharply lower dollar GDP in Q1 2020, and the plunge in Q2 2020, the year-over-year growth rates for Q1 and Q2 this year will be massive, even as GDP in dollars will likely remain below where it had been in Q4 2019. But these are the kinds of year-over-year percentage spikes we’re going to see, even as dollar figures have not reached back to 2019 levels: 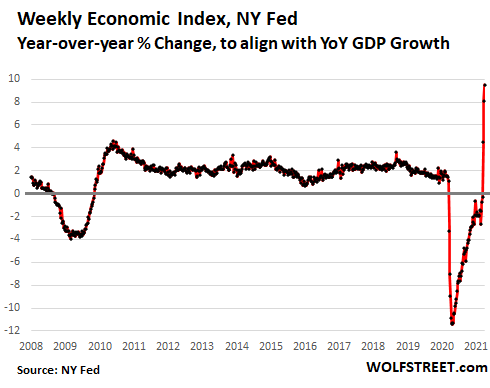 Another example, to dip into absurdity: The TSA reports daily checkpoint screenings, a measure of how many people entered into airports. Airlines were essentially shutting down last April and the number of passengers collapsed by over 90%, to just a trickle. Compared to 2019, the current 7-day moving average of daily checkpoint screenings is still down 37%, but compared to a year ago, it spiked by 1,168%.

All year-over-year percentage change figures of consumer spending, corporate revenues and profits, traffic, GDP, etc. will produce some truly absurd spikes, many of them without reaching the dollar levels of 2019.

This phenomenon is the “base effect.”

Fed Chair Powell brought it up when he was dismissing future inflation. Inflation dipped on a month-to-month basis for three months last spring, as energy prices collapsed and prices of some services, such as hotel and flight bookings, swooned. So year-over-year CPI growth will jump over the coming month, in part because of this base effect. And Powell is going to dismiss this jump in inflation, and he will be using the term “base effect” to do so.

But you guessed it, no one will blame the “base effect” for the approaching massive year-over-year jumps in corporate revenues and earnings.

Q1, Q2, and Q3 2020 were rough for many companies. Revenues were down or had vanished, and profits had collapsed or had turned to losses. Going forward, these companies will report their year-over-year growth rates in revenues and earnings, and some of those growth rates are going to be between huge and ginormous, but from the much lower base in the same quarter last year. This too is the base effect.

We’re going to be awash in these huge percentage growth numbers. Wall Street analysts are already reveling in it.

But two-years-ago comparisons back to 2019, which is what should be highlighted and what the TSA is now highlighting in its checkpoint screenings, are not going to show up on the radar screen of Wall Street analysts. That would be too awkward.

122 comments for “Get Ready for a Wild “Base Effect”: Highlighted Forcefully when it Suits Them, as with Inflation; Silenced Forcefully When it’s Awkward, as with Corporate Earnings”