Subsidizing CMBS impedes the necessary market adjustment away from commercial property and toward residential redevelopment.

Massive federal intervention has softened—or maybe just postponed—a feared meltdown in the market for Commercial Mortgage-Backed Securities (CMBS), bonds backed by loans on offices, hotels, retail centers and other non-residential properties. But not all of these bonds were created—or rated—equally, and some supposedly gilt-edged CMBS backed by shopping mall mortgages are unlikely to pull through the COVID-19 downturn.

When financial markets seized up last March, Congress, the Administration and the Federal Reserve took a series of aggressive measures that levitated falling securities prices. Since the beginning of the crisis, Congress passed and Presidents have signed $6 trillion in relief bills, including stimulus checks and unemployment benefit enhancements that have helped the general public to keep shopping.

Most of the federal debt issued to pay for this stimulus has been bought by the Federal Reserve with freshly printed money. If inflation obliges the Fed to rein in the money supply by shedding this debt, it will become a burden on future generations. But, for now, Fed action has helped drive down 1 year Treasury rates from about 1% before the pandemic hit to less than 0.1% today.

Low base interest rates drive demand for CMBS and other risky securities as institutional investors stretch for the greater yields they offer. Finally, the Fed has directly supported markets for CMBS and other structured instruments by lending money to investors willing to buy these securities.  The Fed’s Term Asset-Backed Lending Facility has supported purchases of $1.4 billion of these CMBS since last March.

But these interventions will not save all CMBS from defaulting. Several bonds backed by mortgages on one shopping mall or a small pool of malls owned by a single borrower are unlikely to emerge from last year’s downturn unscathed. Among the bonds likely to experience payment defaults are AAA-rated securities that should have never been assigned top ratings in the first place and should have been downgraded before COVID-19 entered our vocabulary. The pandemic accelerated the trend away from brick-and-mortar retail, but that trend was already well established years ago.

On April 7, The Wall Street Journal reported that Destiny USA’s owner, Pyramid Management Group, has hired a financial advisor and law firm to look into restructuring the mall’s debt, which includes both commercial mortgages and municipal securities known as PILOTs (Payments In-Lieu of Property Taxes). The PILOT debt is senior to the larger of Destiny USA’s two collateralized mortgages.

These two debt issues represent a total of roughly $716 million in outstanding principal. But appraisers recently slashed the mall’s valuation to just $203 million.

That is not even enough to cover the $286 million in PILOT bonds, leaving little if any for CMBS investors. The Class A CMBS bond was recently offered at 70 cents on the dollar according to Empirasign, a market data provider, suggesting that traders anticipate a loss of principal.

Kroll Bond Rating Agency maintained its AAA rating on the Class A debt until June 2020 but has since lowered the rating twice to its current level of B-, well into junk bond territory.  Standard and Poor’s first downgraded the bond in March 2020 and recently had the same B- rating as Kroll.

Foot traffic at Destiny USA has yet to return to 2019 levels, according to cell signal data collected by Advan Research (see accompanying chart). The recovery in customer visits will be hampered by the recent closure of Best Buy’s location at the mall. 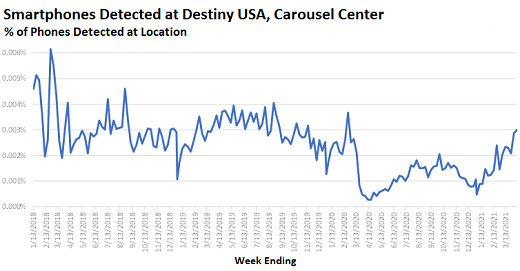 Meanwhile, S&P has downgraded senior debt on Palisades Center Mall in New York City’s northern suburbs from AAA to BBB. Moody’s also assigned this bond its top rating—Aaa—at origination, but most recently downgraded the bond to A3 while also reporting that the mortgage loan was 60-days delinquent as of February. Palisades Center’s valuation has been reduced from $881 million to $425 million.

In addition to the Pyramid bonds, debt supported by the Starwood Retail Portfolio is also suffering. The Class A bonds were recently quoted at 74.5 on Empirasign and have been downgraded from AAA to B by both S&P and DBRS Morningstar. This deal, which involves four shopping malls under common ownership, was clearly in trouble well before the pandemic: Starwood Property Trust fully wrote down its investment in the four malls by the end of 2019.

Federal Reserve intervention and inflated bond ratings may support CMBS prices, but they do so by distorting the allocation of resources. America is over-stored and under-housed. Subsidizing CMBS impedes the necessary market adjustment away from commercial property and toward residential redevelopment. The sooner uneconomic malls are allowed to go bankrupt, the faster these properties can be converted to higher and better uses.

The disappointing performance of the Pyramid and Starwood CMBS should remind institutional investors not to rely solely on rating agencies and to perform their own due diligence. Regulatory changes in the wake of Dodd Frank did not prevent CMBS rating inflation, and they have yet to produce adequate monitoring—at least in the cases reviewed here. Non-rating agency services that provide independent commentary, market color, alternative data (such as foot traffic estimates) and customized news feeds are a welcome market response to traditional rating research. By Marc Joffe, a Senior Policy Analyst for Reason Foundation; previously, he was a Senior Director at Moody’s Analytics.