Around the world, there has been massive fiscal and monetary stimulus, an unprecedented growth in government-guaranteed lending, an explosion in the broad money supply, coupled with low inventories, supply chain shocks, rising shipping costs, and surging demand for certain commodities and consumer goods in developed countries, particularly the US. Companies are able to raise prices and pass on higher costs without triggering a buyers strike as the inflationary mindset has kicked in.

Many emerging economies are also having to contend with the additional inflationary impact of weaker domestic currencies. They include Mexico, where consumer prices rose to 4.7% in March — their highest level since December 2018. Prices are now firmly above the Bank of Mexico’s target inflation rate of 3%, with a one percentage point tolerance threshold above and below that level. In March alone, consumer prices grew 0.8%: 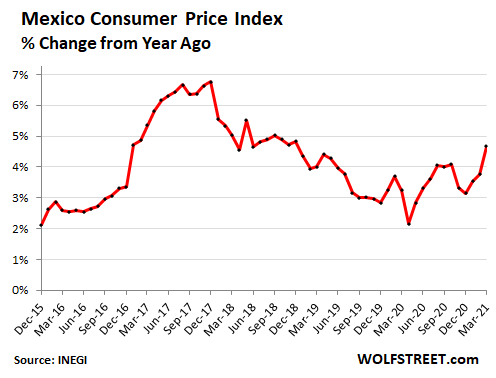 The items that saw the biggest month-on-month price increases were domestic LP gas (5.2%), low-octane gasoline (6%), and staple foods such as eggs (8%).

Surging commodities prices are being passed on to retail products. The price of corn reached $5.68 per bushel in March, up 74% from a year ago. Since last June, the price of this essential grain, for both human and livestock consumption, has risen every month. With consequences: The price of corn tortilla, Mexico’s most important staple food, rose by almost 3% in March from February.

Last year Mexico’s economy suffered its biggest contraction (8.5%) since the worst year of the Great Depression, 1932. It also appears to have contracted in the first quarter of 2021. But prices continue to rise, leaving the Bank of Mexico little choice but to abandon its plan to cut interest rates this month.

Rising prices force the central bank to hike interest rates, which is the last thing a shrinking economy needs. This is precisely what happened in Brazil three weeks ago.

Brazil’s central bank, spooked by a surge in inflation, struck back with a surprise shock-and-awe rate hike of 75 basis points, bringing its Selic rate to 2.75. It was the first increase in six years and the biggest in over a decade. The central bank has indicated that it will raise rates by the same amount in May, barring a significant change in the outlook.

It will take time for the first rate hike to have an appreciable effect on consumer prices. In the meantime inflation continues to rise. In March the consumer price index rose to 6.1% — the highest since December 2016 and well above the upper limit of the central bank target of 5.25% (chart via Trading Economics). 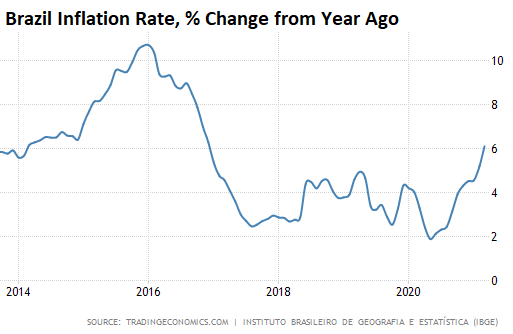 Producer prices in Brazil had risen in February at their fastest rate since comparable records began seven years ago. The monthly rate of factory gate inflation jumped to 5.2%, and the annual rate jumped to 28.6%, both the highest since statistics agency Ibex’s data series began in January 2014. On an annual basis, the biggest rise in February was a 87.6% spike in mining industry inflation, IBGE said. But food price inflation contributed to nearly 8 percentage points or more than a quarter of the overall annual rise.

In Brazil, as in Mexico, when food prices soar, those living on the margins struggle to fill their food baskets. They represent a large part of the population. Widespread hunger can quickly give way to widespread anger. In Mexico eruptions of popular anger have triggered nationwide rioting twice in the last 15 years, in 2007 and 2017. In 2017, a one-off 20% hike in gas prices — the so-called gasolinazo — sparked days of protest as thousands of people all over the country marched on Pemex gas stations, blocked roads and picketed refineries, to register their rage.

Prices are soaring at the pump once again, in both Mexico and Brazil. In Mexico gasoline prices have risen on average by 30% over the last year while diesel is up 11%. in Brazil fuel prices have risen 11% in the past month alone. When energy prices rice, the price of many other things rise too.

The Bank of Brazil, like many central banks, asserts that a “large part” of the recent rise in inflation is due to temporary “factors” that will soon disappear, like “short term fuel price rises.” It is the same message we can expect to hear from central banks in more advanced economies when inflation reaches or soars past their target rate.

But there is quite a lot of divergence between countries in Latin America. In Colombia annual inflation clocked in at 1.5% in March, less than half of where it was a year ago (3.5%). In Peru it was 2.6%, in Uruguay, 3%, in Chile, 2.9% and in Ecuador -0.8%. As for Venezuela, it has been in full-blown hyper-inflation for years.

But in Argentina, which has been willfully destroying its own currency and, aided and abetted by Wall Street firms, regularly abuses bond-fund retail investors with serial defaults and haircuts on its foreign-currency bonds, inflation is red hot with an annual rate of 42.6% in March: 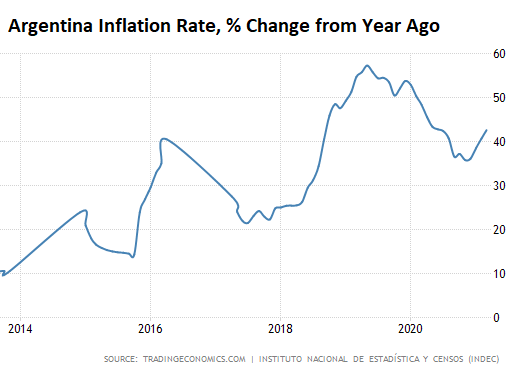 All countries in Latin America have relatively fresh memories of high, if not hyper, inflation. In the 1980s, annual inflation twice soared above 100% in Mexico, wiping out the savings of a large part of the middle class. In Brazil it reached over 6,000% in 1990. These countries have all seen the economic destruction high inflation can wreak and they don’t want to see it again. By Nick Corbishley, for WOLF STREET.

102 comments for “Unwelcome Inflation Heats Up in Mexico, Brazil, and as Always in Argentina”