People massively chased their dream and started new businesses, and that is wonderful. Then there’s the issue of large-scale PPP loan fraud.

The historic over-night explosion of layoffs last spring, the tsunami of free money from the government for people and businesses alike, whether they needed it or not, whether they were fraudulent or not, and people’s reactions to that free money have upended all kinds of economic dynamics. And the double-spike in applications to start new businesses is one of them.

The 440,165 applications filed in March with the IRS for an “Employer Identification Number” (EIN) were up 47% from February 2020, the last month before the Pandemic. In Q1, applications jumped by 62% from a year ago. In July last year, business applications had nearly doubled year-over-year, producing a historic spike that faded through December, then re-spiked in January for a double-WTF moment – and we’ll get into potential reasons in a moment. 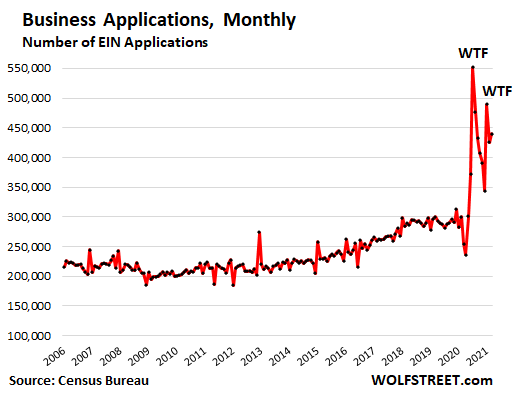 This data from the Census Bureau is not based on surveys, but on actual applications by new businesses for a federal EIN, with which the IRS tracks businesses for tax purposes.

From the information in the EIN application, the Census Bureau estimates which businesses have a “high propensity” of having a significant payroll (“High-Propensity Business Applications” or HBA) and might therefore become job-creating machines.

In March, there were 153,186 applications that the Census Bureau deemed to be HBAs, up 35% from February last year. In Q1, HBA applications jumped by 47% in Q1 compared to last year. That massive spike last July faded through December, but then applications re-spiked in January. Note that it took this spike to get to and surpass the number of applications before the Financial Crisis: 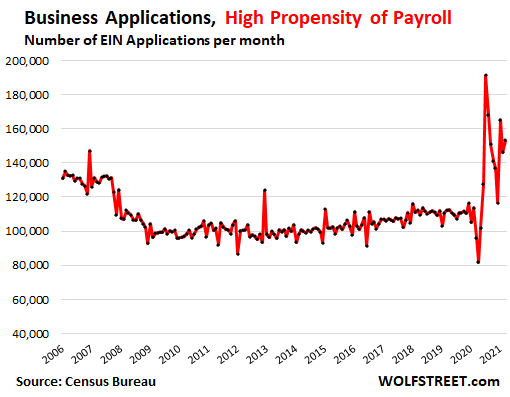 Within the HBAs are the “Business Applications with Planned Wages” (WBA). These are businesses that already have a planned date for paying wages. They have hired people and have funding in place and are ready to pay wages and grow their payroll and become significant employers.

In March, 53,213 business applications of this type were filed, up 37% from February last year. The Q1 total was up by 50% compared to Q1 last year. But note that even the huge spike in July didn’t bring applications by these job creating machines back to levels that prevailed before the Financial Crisis: 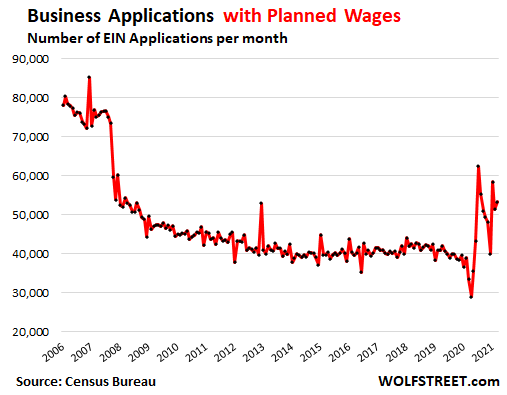 Most of the applications are by businesses with a low propensity to create jobs. 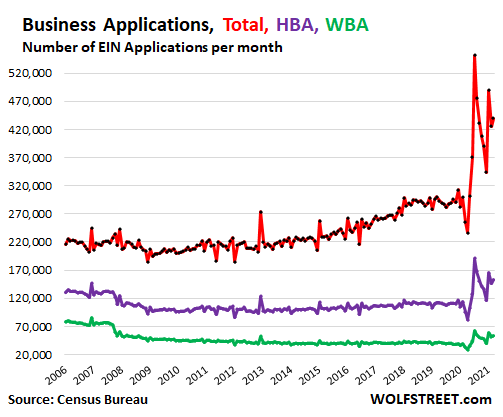 Brick-and-mortar retail took a horrendous beating during the lockdowns, as large retailers that sold food and everything else, such as Walmart and Costco, were allowed to stay open, while retailers that didn’t sell food had to close. These retailers that had to close had already been beaten down before the Pandemic by the competition from ecommerce. Many big-box stores filed for bankruptcy. Little shops went quietly, walking away from their lease, maybe working out a deal with the landlord, and then closing the shop.

In March, business applications in the retail trade, at 81,469, where still roughly double the levels in 2019 (red line in the chart below). Nothing else came close. This is interesting because in the years before, retail trade applications ran roughly on the same level as professional services applications (green line), but then during the Pandemic just blew through the ceiling. Also note that all categories have that double spike: 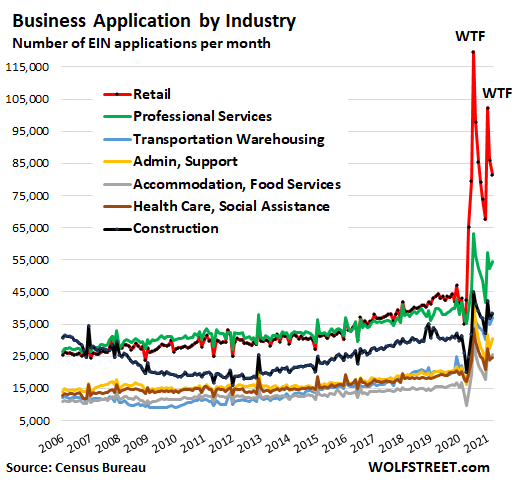 The chart above shows the top seven industries, by number of business applications in March, plus the increase from 2019:

Entrepreneurs try to make a go of it.

There are many legitimate and exciting reasons for a surge in business applications during the unemployment crisis, including that people had time, and some extra cash from the government to finally chase after their dream and strike out on their own and start a company. I know several people who’ve done exactly that, and that’s exciting and wonderful to see.

Anything having to do with the internet – whether retail or delivery or posting YouTube videos and making money from ads – would naturally be a primary target during the lockdowns. And lots of people did that. This type of fired-up entrepreneurial energy is one of the best things to come out of this crisis.

But there’s another side.

I don’t remember anything that has ever drawn so much fraud to itself, like an industrial magnet attracting ferrous scrap metal, as the federal government programs to support the unemployed and struggling businesses.

When it comes to this twin-spike in business applications, the forgivable Payroll Protection Program (PPP) loans and Economic Injury Disaster loans come to mind immediately – especially since the spike into July, and then the renewed spike this year, are timed with the two PPP generations.

The dates were structured so that it would be impossible by honest people to create a business entity after the announcement, pay wages for long enough to qualify for a PPP loan, and then apply for a PPP loan. Applicants had to submit historical wage documentation to the lenders whose job it was to check all this out.

What we now know is that these PPP loan applications were rife with misstatements and fraud. Fintech companies have plowed into PPP loans with reckless abandon. A Bloomberg analysis in October found that Fintech outfits were connected to 75% of the PPP fraud cases alleged by the US Justice Department at the time, though they only arranged 15% of the number of total loans.

Once fraud by the borrower is involved, it no longer matters what the original requirements were because they’re being bypassed by the fraudster to begin with.

The Project On Government Oversight (POGO) reported today: “The Justice Department has brought criminal charges against at least 209 individuals in 119 cases related to Paycheck Protection Program (PPP) fraud since banks and other lenders began processing loan applications on behalf of the Small Business Administration on April 3, 2020. And these cases are just the beginning.”

POGO’s analysis of the first batch of PPP fraud cases found that in at least:

So on one hand, this spike in EIN applications is the result of an exciting surge in entrepreneurial energy by a large number of people striking out on their own and getting their ducks in a row to start a new business, which is wonderful to see. On the other hand, this spike appears to include large-scale and systematic efforts at fraud, the extent of which – beyond some titillating nuggets emerging from investigations – we may never be able to fully fathom.