Archegos shows how leverage is the great accelerator of stock prices on the way up, and on the way down. One of its bets, ViacomCBS, after skyrocketing, collapsed by 60%.

Vast, unreported, and at the time unknown amounts of leverage blew up Archegos Capital Management, dishing out enormous losses to its investors, the banks that brokered the swaps, and holders of the targeted stocks. The amount of leverage became known only after it blew up as banks started picking through the debris. ViacomCBS [VIAC] was one of the handful of stocks on which Archegos placed huge and highly leveraged bets, thereby pushing the shares into the stratosphere until March 22, after which they collapsed by 60%.

Archegos is an example of how leverage operates: It creates enormous buying pressure and drives up prices as leverage builds, and then when prices decline, the leveraged bets blow up as forced selling sets in. Most of the leverage in the markets is unreported until it blows up. The only type of stock-market leverage that is reported is margin debt – the amount that individuals and institutions borrow against their stock holdings as tracked by FINRA at its member brokerage firms. Margin debt is an indicator for overall leverage, and it has reached the zoo-has-gone-nuts level.

FINRA reported on Friday that margin debt jumped by another $9 billion to $823 billion in March, having soared by $163 billion in five months, and having exploded by 72% from March 2020 and by 51% from February 2020, to historic WTF highs: 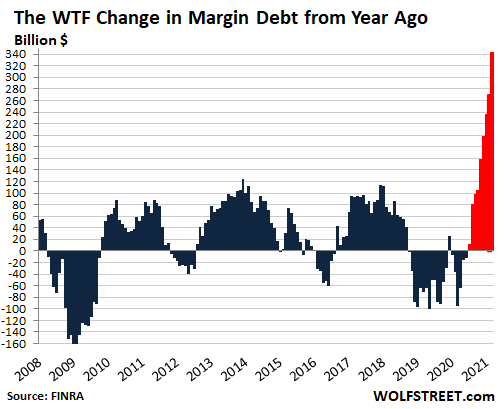 Archegos is an example of how leverage is the great accelerator of stock prices, on the way up, and on the way down. Its massive bets on a handful of stocks, powered by huge leverage, drove up prices of those stocks because it created buying pressure with borrowed money. As prices rose, Archegos could borrow more to increase its bets. And then suddenly, when these stocks started selling off because other investors got out, Archegos got the margin calls, and leverage became the great accelerator on the way down.

While we don’t know how much total stock market leverage there is, we can look at margin debt as a measure of the trend. And the trend has reached whopper proportions. History shows that a big surge in margin balances preceded – and perhaps was a precondition for – the biggest stock market declines: 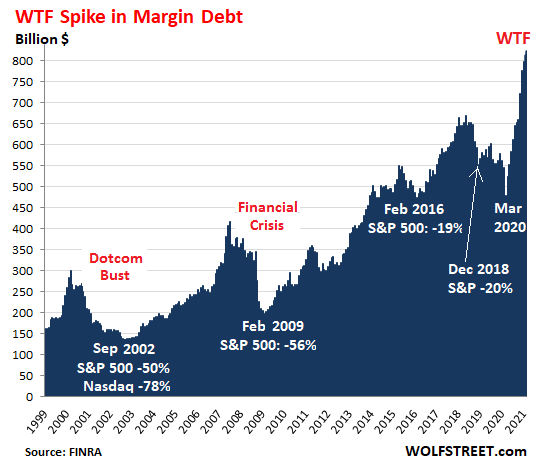 In a chart like this that covers over two decades, the long-term increases in the absolute dollar amounts are not critical since the purchasing power of the dollar with regards to stocks has dropped. What is critical are the steep increases in margin debt before the selloffs.

And when banks issued their margin calls – said to have been the second largest margin call in US history, after Lehman – and liquidated the underlying shares, they were selling those shares against each other. The first-out-the-door, including Goldman Sachs, came away relatively unscathed. Late movers, such as Credit Suisse got mauled.

That’s also a feature of leverage: The first-out-the-door pocket the gains and get away unscathed. Late movers get crushed.

And since everyone knows this, everyone is trying to get out the door first, which is not possible, but it speeds up the selloff.

Among the types of stock market leverage, in addition to margin debt, are derivative products, such as the swaps that sank Archegos, portfolio-based lending, and Securities-Based Loans. Each broker knows what they have on their books, presumably, but they don’t know what other brokers have on their books, and no one knows the total, and no one knows just how leveraged the markets are.