Banks, as prime brokers and counterparties to the hedge fund, are eating multi-billion-dollar losses as they try to get out of these secretive stock derivative positions.

The implosion of an undisclosed hedge fund, now widely reported to be Archegos Capital Management, is hitting the stocks of banks that served as prime brokers to the fund. The highly leveraged derivative positions, based on stocks, had blown up spectacularly. Banks get into these risky leveraged deals because they generate enormous amounts of profit – until they blow up and banks get hit as counterparties.

Credit Suisse [CS] is down 13% at the moment in US trading after it warned this morning that “a significant US-based hedge fund defaulted on margin calls made last week by Credit Suisse and certain other banks,” and that it and “a number of other banks are in the process of exiting these positions,” and that the loss resulting from this exit “could be highly significant and material to our first quarter results.” The bank deemed it “premature to quantify” the loss.

Nomura Holdings [NMR] is down 14% at the moment in US trading after it warned this morning that “an event occurred that could subject one of its US subsidiaries to a significant loss arising from transactions with a US client.” It estimated the loss from this one client at “approximately $2 billion, based on market prices as of March 26.”

As Credit Suisse pointed out, “a number of other banks” are also involved as counterparties to that one unnamed hedge fund, and have been trying to get out of these positions since last week.

Deutsche Bank got out of its positions unscathed, according to a spokesman, cited by the Wall Street Journal, perhaps because it was properly hedged: “We are managing down the immaterial remaining client positions, on which we do not expect to incur any loss,” he said.

Last week, Archegos – which manages the wealth of former Tiger Asia manager Bill Hwang and his family – received margin calls from these banks that forced it to liquidate its positions. Last week alone, not counting the liquidations today, sales approached $30 billion, according to sources of the Wall Street Journal.

In a margin call, the broker as lender demands that the client put up more collateral if the price of a leveraged position has dropped sharply. If the client fails to do that, the lender will sell the securities to recover the amount owed. But in this case, the sale of the collateral wasn’t nearly enough to cover what is owed, and the banks eat the losses.

Heavily involved in these liquidations were the American Depositary Receipts (ADRs) of Chinese companies, such as Baidu, GSX Techedu, Tencent Music, and shares of US media companies such as Discovery and ViacomCBS. And their shares, after skyrocketing since last March, collapsed.

ViacomCBS [VIAC] has collapsed by 54% in five trading days, including today. But after the ludicrous surge – quadrupling between early August and March 22, and multiplying by 10 since the March 2020 low, amid general market mania – shares are now back where they’d been only two months ago… 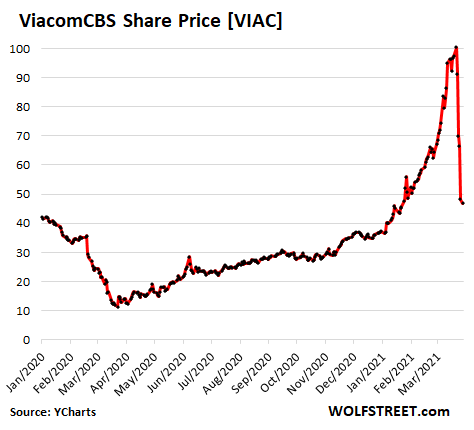 The forced liquidations became apparent last week with the sale of huge blocks of shares, including shares of Discovery and ViacomCBS, by Goldman Sachs, Deutsche Bank, Morgan Stanley and other banks, amid swirling rumors that a hedge fund had collapsed.

The positions “may have topped $50 billion,” but those weren’t actual stocks, but derivatives based on stocks, called Contracts for Difference (CFD), and Archegos may have never owned any of the underlying stocks, according to Bloomberg this morning, citing people familiar with the matter. The size of the fund remains unclear, but before all this transpired, it was estimated to have grown to $5 billion to $10 billion, by riding these leveraged trades to the top.

It is also unclear what remains of the fund at this point, but one thing we already know: Some of the losses were eaten by the banks.

A CFD is a contract between the trader, such as Archegos, and the broker such as Credit Suisse, Nomura, Goldman Sachs, etc. It’s a type of equity swap. Leverage can be huge, and trading is opaque and does not involve an exchange, but takes place between the trader and the broker or a market maker or between parties. In the US, CFDs are illegal for retail traders, but not for hedge funds.

The fact that Archegos’ positions were derivatives, rather than actual stocks, allowed it to build large stakes – some of them giving it exposure to over 10% to these companies’ shares – without having to disclose those stakes to regulators, which it would have had to do with regular stock positions of that magnitude. This allowed Archegos’ exposure to those shares to remain anonymous until the trades blew up.

The secretive nature of these trades had the effect that the prime brokers to the fund, such as Credit Suisse, didn’t know about the large-scale involvement of other prime brokers, such as Nomura, Deutsche Bank, and Goldman Sachs. And when they figured it out, it was too late. And last week, when the forced selling started, each prime broker wasn’t alone in unwinding the positions but was doing so against the other prime brokers trying to do the same thing.

This blowup is one more sign of just how much leverage has been built up during this market mania, and how exposed investment banks are to this leverage. How many more hedge funds need to blow up before the banks, in their role as prime brokers to these hedge funds, are beginning to sing the blues, while trying to get out of a myriad of positions?

And Margin debt, ladies and gentlemen, jumped in a historic manner, by 50% from a year ago, the most ever, to the most ever. Read… Stock Market Leverage Spikes in Historic Manner: Another WTF Chart of a Zoo that Has Gone Nuts