But who are the suckers?

It’s now happening again. And the deal was made today. The playbook goes like this: Argentina and Wall Street investment banks decide to sell Argentine bonds denominated in dollars, euros, or Swiss francs. The banks underwrite those bonds and promote them and sell them to investors, such as bond mutual funds and life insurance companies or even individuals. It works for everyone: The banks get the fees. Argentina gets the proceeds in hard currency. And the suckers get the bonds.

Argentina even makes coupon payments for a while, like a year or two, and then it says it’s out of money and threatens to default. The IMF swoops in and bails out Argentina with tens of billions of dollars in loans – such as $44 billion in loans in 2018 and 2019. A year later, Argentina has burned through these bailout dollars and finally defaults on its dollar-euro-CHF bonds that by then have collapsed to 30 or 40 cents on the dollar.

The original investors – the bond mutual funds and the like, playing with other people’s money, often retail investors – sell these bonds at a big loss to other elements on Wall Street, such as hedge funds or distressed-debt investors, who become the new creditors. Then a restructuring deal is made between Argentina and these new creditors, whereby Argentina will swap those bonds at 55 cents on the dollar for new bonds.

After the settlement and completed restructuring, the default is forgotten, and IMF provides more support, which then allows the government to go back to the Wall Street banks that will then put together the next dollar-bond issue to sell to bond mutual funds with big fanfare and hoopla, while pocketing juicy fees. Rinse and repeat.

The government constantly destroys its own currency through inflation, currently running between 40% and 50% a year. To slow the collapse of the peso, the government has imposed capital controls in September 2019 and has tightened them further since then, and it imposed an official exchange rate, which caused the peso to trade on the black market again, where it has swooned even more.

Back in 2000, 1 ARS was pegged at 1 USD. Over those 20 years the ARS has become worthless against the dollar, even as the dollar too has lost plenty of value.

This chart shows the course of the peso over the past seven years, during which it lost 93% against the USD at the official exchange rate, and more if calculated at today’s black-market rate: 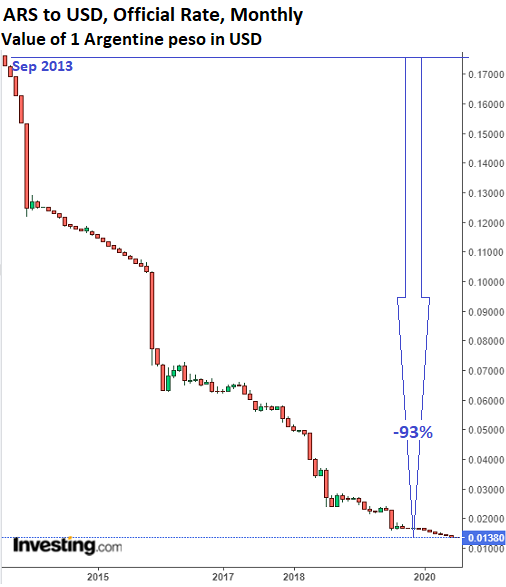 Because the government constantly destroys its own currency, it cannot borrow long-term in pesos without paying investors a huge amount in interest to compensate them for getting annihilated by the destruction of the peso.

So, it borrows in foreign currency, where interest is cheap, but then it cannot service that debt due to the destruction of its own currency which makes paying interest in hard currency impossible, which then prevents the government from paying interest or rolling over this debt when it matures, at which point it defaults.

So this is a circular fleecing operation, and it will repeat itself as long as there are the suckers that make it possible. Those suckers to be fleeced are mostly retail investors that end up directly or indirectly, knowingly or unknowingly buying the original bonds – including, incredibly, the 100-year bonds Argentina sold in 2017 – and handing their hard currency over to Argentina’s government to burn.

So where in this cycle is today?

After months of negotiations over restructuring the $65 billion of bonds that Argentina defaulted on – including the bonds issued since 2016 plus already restructured bonds from prior defaults – the government announced today that it has come to an agreement with three creditor groups, representing the largest holders, including BlackRock, Ashmore Group, and Fidelity Investments.

These three creditor groups represent 60% of the bonds from the prior debt restructurings, and 51% of the new bonds issued since 2016. Other major holders include Monarch Alternative Capital, VR Capital Group, Greylock Capital Management, and Pharo Management.

Under the deal, the $65 billion in defaulted bonds will be swapped for new bonds, and that swap will grant Argentina “significant debt relief,” as the government put it today. In other words, a big haircut for bondholders.

But the haircut is not a problem for current bondholders who bought the bonds for cents on the dollar, waiting for just this sort of opportunity.

The government’s announcement didn’t indicate the size of the haircut, but sources close to the deal told Bloomberg that the deal is worth 54.8 cents on the dollar of the original bonds. That’s a sweet deal for distressed-debt investors that might have picked up those bonds somewhere between 30 to 40 cents on the dollar.

Upon the announcement of the deal today, those bonds jumped. For example, the $3 billion of bonds due in 2048 jumped around 7% this morning, to 46 cents on the dollar, according to Bloomberg.

To handle the bond exchange invitation, the government said it has hired BofA Securities and HSBC Securities (USA) to act as dealer managers, and Lazard to act as financial advisor. Fees galore. Wall Street loves Argentina coming and going!

When the deal is done, Argentina’s burden of foreign-currency debt will be cut sharply – via the haircut to bondholders. And the IMF, which had insisted on a haircut, will be less reluctant to lend even more money to Argentina.

Eventually, with this backing from the IMF, Argentina will go back to its buddies on Wall Street, and sell more dollar-bonds and euro-bonds. And it will add a little extra yield in a yield-starved world to entice suckers to buy them wittingly or unwittingly, while in the background, the government continues to destroy the peso, which will make servicing those new bonds impossible in due time. Rinse and repeat.