Precisely what’s needed to end the price collapse. But last time, it wasn’t long before Wall Street liquidity surged back into shale, starting the cycle all over again.

US crude oil production in May plunged by 1.99 million barrels per day, from 12 million b/d in April to 10 million b/d, the largest monthly drop since at least 1980, and the sixth monthly drop in a row, according to the EIA.

This comes after the collapse in demand for transportation fuels – especially gasoline and jet fuel – that started in March and exacerbated the oil glut and a downward spiral of the already depressed prices for crude oil. Amid a torrent of bankruptcy filings by oil-and-gas companies, drillers cut drilling activity and production. This trend restarted last year, after having subsided somewhat following phase 1 of the Great American Oil Bust in 2015-2016, but took on record proportions during the Pandemic. From the peak in November 2019 of 12.86 million b/d, production has now plunged by 22.2%: 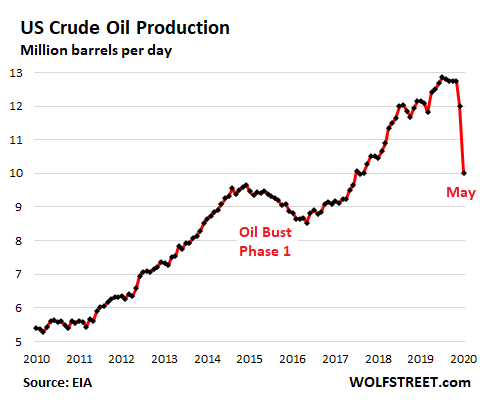 The chart below shows the the price of benchmark crude oil grade West Texas Intermediate. Note how the price recovery from late 2016 ended in the fall of 2018 and then reversed, as production surged. The price decline bottomed out on April 20, when for a brief period the price of WTI plunged below zero, a bizarre moment in the history of crude oil: 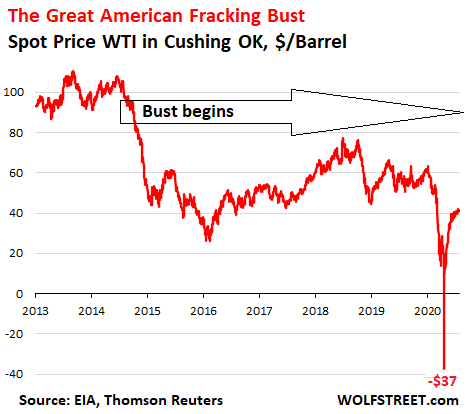 The table shows the top 19 producing states and the federal offshore Gulf of Mexico, with April and May production, and the percent change in May, month-over-month and year-over-year. Three states, all smaller producers, actually booked month-over-month increases in production:

Production of natural gas peaked in November 2019 at 116.6 billion cubic feet per day and has since then dropped 8.7%, including 5.3% from April to May. In terms of cubic feet, the 5.9 million cf/d drop in May was the second largest drop ever: 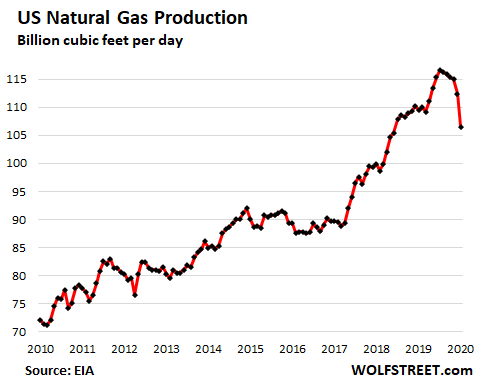 Texas and Pennsylvania are the two largest natural gas producing states, accounting for 43% of total US production. These are the top 16 states and the federal offshore Gulf of Mexico, with April and May production, and the percent change in May, month-over-month and year-over-year:

The industry hopes that the sharp decline in production of US crude oil and natural gas, along with the production cuts by producers around the world, will alleviate the glut that was first caused by surging production in the US, and then by the collapse in global demand during the Pandemic.

The bankruptcy filings of oil and gas companies in the US are now a routine occurrence. The industry has run out of money as crushed investors have stopped feeding it. And now the assets are getting redistributed in bankruptcy court, from shareholders to creditors, at cents on the dollar.

But one thing has become abundantly clear over the past few years: If there is enough money, the shale oil-and-gas business can ramp up production at lightening speed, which is what happened in late 2016 after phase 1 of the Great American Oil Bust, when Wall Street unleashed the opportunity seekers as crude oil prices were rising again. This newly resurging production then led to the next glut and phase 2 of the Great American Oil Bust, with prices heading lower again starting in the fall of 2018. And as this was playing out, it ran into the collapse of demand during the Pandemic.

So now the production cuts are serious. Assets are getting redistributed and debts wiped out in bankruptcy court. At the same time, demand for transportation fuels is recovering. This combination of sharply reduced production and recovering demand would indicate that eventually prices would rise to a level where the industry can survive.

But there is a huge amount of liquidity in the market, and yields are repressed and investors are on a crazy chase for yield, and there is the risk that at the first sign of opportunity in oil and gas, some of that liquidity will surge back into shale, unleashing in practically no time a torrent of production, and then the cycle starts all over again.