“Once crisis tools have served their purpose, central banks should scale them back.”

The Bank of Canada will unwind its crisis liquidity facilities, will further reduce its purchases of Government of Canada bonds, which it already started tapering in October, will let short-term assets “roll off” the balance sheet when they mature, and will as a result reduce its total assets from C$575 billion now to $C475 billion by the end of April, announced Bank of Canada Deputy Governor Toni Gravelle in a speech today.

Most of the speech was focused on the reasons for the QE and liquidity programs that the Bank of Canada unleashed starting in mid-March last year, in a two-fold role: In its role as “lender of last resort,” to deal with the “extreme stress” in the markets, as liquidity dried up and markets weren’t functioning or had “seized completely” as everyone was trying to sell everything in a mad “dash for cash.” And in its role as provider of stimulus as the economy that was spiraling down.

But these actions ballooned the balance sheet fourfold, to C$575 billion, and it created the possibility of “moral hazard.”

“Moral hazard emerges whenever market participants or other economic actors feel that they can engage in risky behavior without bearing consequences if things go wrong,” Gravelle said, a year after moral hazard became forever the guiding principle of the markets.

But moral hazard can be limited “by ensuring that such actions have a predetermined expiry date or are unwound when they’re no longer needed,” he said.

“Once crisis tools have served their purpose, central banks should scale them back to show that they are emergency measures and don’t reflect business as usual,” he said.

“When central banks provide liquidity, we have to do so in ways that don’t encourage market participants to take undue risks in normal times. Our actions must be targeted at specific issues and scaled back as those are resolved,” he said.

Since last fall, the Bank of Canada already ended it program for bankers’ acceptances, tightened the conditions for its repo program, stopped adding to its mortgage-backed securities, and slowed adding to its Government securities (but also shifted from short-term to longer-term maturities to provide the same stimulus for less money).

This chart shows the major liquidity and QE programs, and how they have fared. Several of them are already at zero or near zero. Two major ones, repos and Treasury bills, have been in decline for months. The biggie is still growing, the GoC bond program (red): 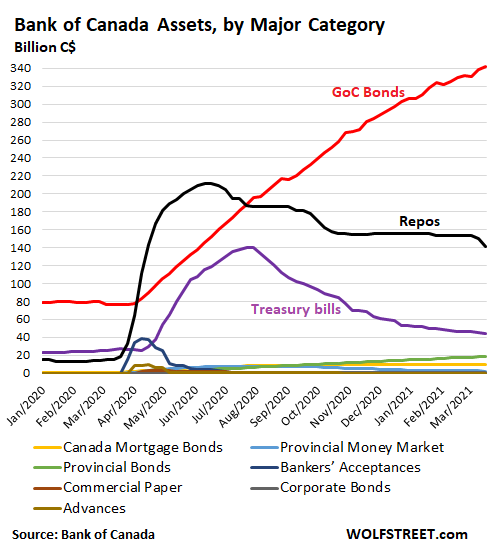 Ending and unwinding the liquidity programs.

“In the coming weeks, the Bank will suspend or discontinue our remaining market liquidity-focused crisis programs,” Gravelle said.

And the Bank of Canada announced today that it will let these programs expire on their originally announced expiration dates, but it “currently” doesn’t plan on selling the securities:

As these programs end, short-term securities will mature and roll off the balance sheet (as the Bank of Canada gets it money back). 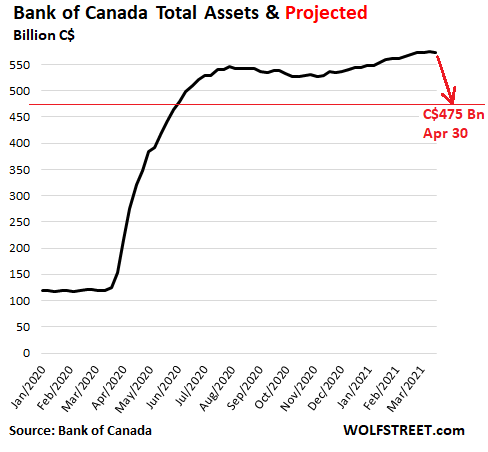 Last October, the Bank of Canada reduced the purchases of GoC bonds to C$4 billion a week, but shifted to longer maturities to provide the same overall stimulus with fewer purchases.

Now the BoC is opening the door to further tapering of the purchases: It will continue to increases its holdings but at a slower pace going forward. “We would be easing our foot off the accelerator, not hitting the brakes,” Gravelle said.

“The process for getting there will be gradual and in measured steps,” he said.

And rate hikes? When the economy and inflation are on target, as outlined in its forward guidance, “we will need to start raising our policy rate,” he said.

And he added, “we will be mindful of the possibility that our stimulative monetary policy – while essential to achieving our inflation objective – could increase financial vulnerabilities.”