To be honest, the WTF SPAC bubble wouldn’t be complete without a WeWork listing that lets SoftBank get out.

WeWork is at it again – or rather SoftBank, its primary investor and bail-outer. WeWork disclosed in documents shown to prospective investors that it had lost $3.2 billion in 2020, on top of the $3.5 billion it had lost in 2019, for a two-year loss of $6.7 billion, and this isn’t a net loss under GAAP, but based on adjusted earnings before interest, taxes, depreciation, and amortization. The actual net loss under GAAP would be much higher.

The $3.2 billion loss in 2020 also excludes WeWork’s China business whose majority stake it had sold in September 2020.

The occupancy rate at its offices across the globe had plunged to 47% at the end of 2020, down from 72% during the Good Times at the beginning of 2020. And this happened despite WeWork’s walking out on landlords and abandoning office leases around the world, including in San Francisco and New York City.

To survive, WeWork cut its capital expenditures from $2.2 billion in 2019 to just $49 million in 2020, according to the documents, which the Financial Times has reviewed.

With this illustrious performance under its belt, WeWork is trying to raise $1 billion in new funding and engineer a public listing through a merger with a SPAC at a valuation including debt of $9 billion.

That $9 billion is still a huge amount of money for a company that loses huge amounts of money, but a big step down from its $47 billion “valuation” obtained in a round of funding from SoftBank in January 2019.

In the summer of that year, the super-ballyhooed IPO of WeWork collapsed into chaos, followed by massive rounds of layoffs and cost cuts, and SoftBank stepped in with a big package of rescue funding to keep the outfit out of bankruptcy.

A bankruptcy filing is the avenue competitor Knotel has chosen in February this year to deal with its fate. It didn’t have the endless billions to burn through that WeWork got.

And a bankruptcy filing is also what RGN-Group Holdings chose last year. The US subsidiary of IWG (“International Workplace Group,” previously known as Regus), the global coworking giant that predated WeWork by many years, operates the brands Regus, Spaces, HQ, and Signature by Regus.

And now WeWork needs new investors, namely retail investors, whose cash it can burn through. And this time it’s talking with a star-spangled SPAC, namely BowX Acquisition Corp, according to sources familiar with the matter and to the documents, cited by the Financial Times.

BowX raised $420 million in August 2020, and according to SPACInsider has $483 million in trust. A self-respecting SPAC must have a celebrity involved, and this one lists basketball star Shaquille O’Neal as an adviser. The SEC already warned retail investors about these star-spangled SPACs.

The SPAC, with its $483 million in trust, doesn’t have enough money to fund the $1 billion that WeWork is trying to raise, and so both parties are trying to rope in institutional investors to cough up the remainder.

There is no guarantee that a deal will be worked out, the people told the FT, and they said that WeWork has been in discussions with other parties as well.

WeWork’s business is to sign long-term office leases, redecorate the office spaces and make them cool, and then rent them out in smaller portions, or even just by the desk, by the month. In other words, it takes long-term big office leases and converts them into small portions short-term.

This business model is fraught with risk, and so WeWork set up separate legal entities (in the US, LLCs) for each lease; so if it abandons that lease, the damage will be limited to the separate legal entity, which makes abandoning the lease a relative breeze.

In 2020, it has already walked away from a number of these office leases, including in the San Francisco Bay area and in Manhattan, where it is the largest office tenant.

But WeWork isn’t pitching itself to investors with this humdrum high-risk high-loss business model. Instead, it pitches itself as a tech company – as it says in the documents seen by the FT, a “worldwide property technology platform” and an “asset light platform for managing and orchestrating flexible space.”

And it’s sticking to its old ways of handing out propaganda about its future miracle performance, despite its actual and dismal past performance.

In the documents, WeWork projects that its occupancy rate will miraculously double to 90% by the end of 2022, way above where it had been during the Good Times, and revenues would miraculously more than double by 2024 to $7 billion, and that instead of its $3.2 billion loss in 2020 and its $3.5 billion loss in 2019, it will miraculously generate $485 million in adjusted earnings before interest, taxes, depreciation, and amortization in 2021. Miracles galore.

To be honest, the WTF SPAC bubble wouldn’t be complete without a WeWork listing that would let SoftBank get out. Through March 23, 288 SPACs have gone public and raised $94 billion with their IPOs, according to SPACInsider – $10 billion more than the total amount raised in 2020, which itself had been six times as large as the prior record in 2019: 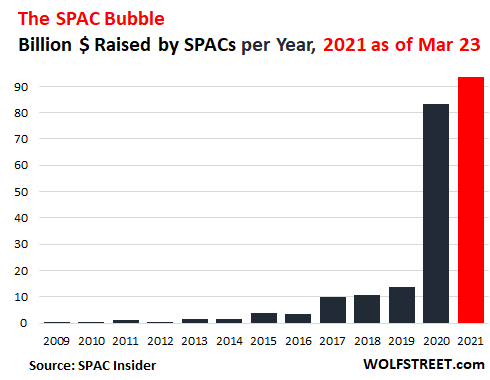