Retailers willing to battle ecommerce will find “ample availability” – the shuttered stores dotting the sidewalks – and much lower but still very high rents.

The collapse of asking rents for vacant retail spaces lining the sidewalks along the 17 major shopping corridors in Manhattan has been spectacular. Since the beginning of the meltdown in 2015, the average asking rent in a number of these corridors has now plunged between 50% and 68%.

But there were a few exceptions. And in one corridor, retail rents soared 70% since 2015.

This is the first half of the seventh year of the meltdown. The whole brick-and-mortar retail model has come under question. Rents in Manhattan, even after the plunge, remain expensive, and retailers, already under attack from ecommerce, are having trouble surviving.

Over the past 12 months through this spring, asking rents fell in 16 of the 17 shopping corridors, according to the Real Estate Board of New York’s just released Manhattan Retail Report.

Landlords are trying to nail down potential tenants with hefty improvement allowances, such as free rent for some months, flexibility on renewal, and other incentives and inducements.

For retailers trying to set up shop, this scenario offers “ample availability” – the empty stores dotting the sidewalks – and lower leasing costs. But this may still not be enough to overcome the two-decade long structural change in how Americans shop, namely online.

So the hope is that if retailers that sell goods can’t make at those rents, or at any rents, maybe shops that sell services and are not being squeezed by ecommerce, such as hair salons, barbershops, yoga studios, dance studios, cafes, and dry-cleaners, might be able to make it.

Folks are now looking for green shoots in the retail sector, but if you look at the charts below of average asking rents per shopping corridor, the pandemic hasn’t visibly altered the meltdown in retail rents that is now in its seventh year.

Some of the toniest shopping corridors are in Midtown. On Broadway and 7th Avenue, between 42nd Street and 47th Street, the average asking rent in the spring 2021 collapsed by 60% from the peak in 2015. Yet rent is still a mind-boggling $1,480 per square foot per year. For example, the rent of a 1,000-square-foot store would amount to nearly $1.5 million per year.

A global luxury retailer would treat that kind of store as a prestige showcase of its products, and would accept the losses from that store as a form of advertising expense, relying on its other stores to make money. But for lesser retailers, that equation doesn’t work. 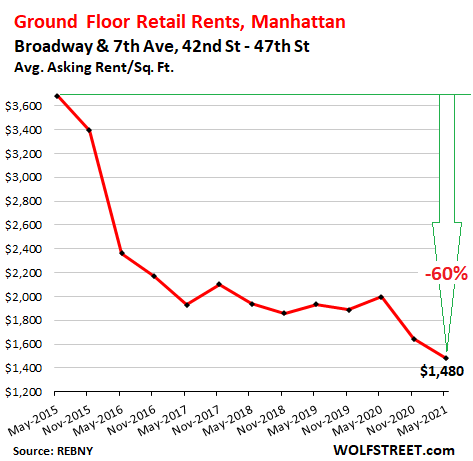 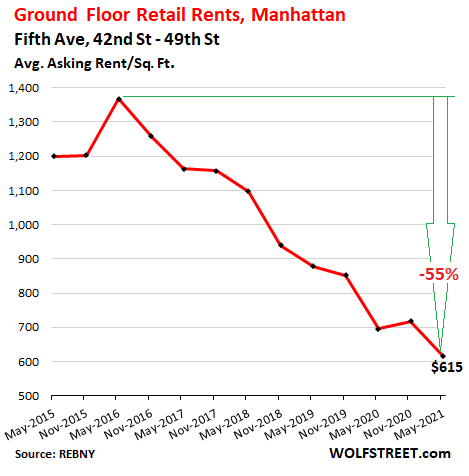 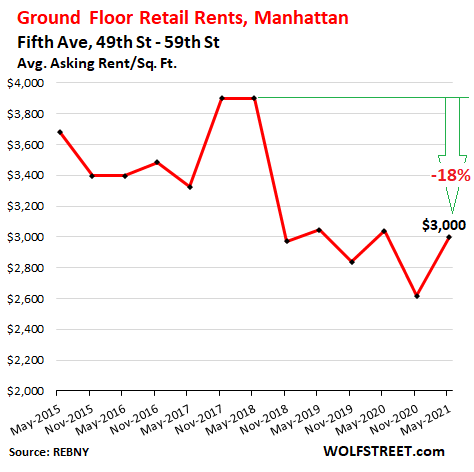 On West 34th Street between Fifth Avenue and Seventh Avenue, the average asking rent ticked up this spring to $488/sf, but was still down 4% year-over-year, and 51% from 2015. There were 8 availabilities: 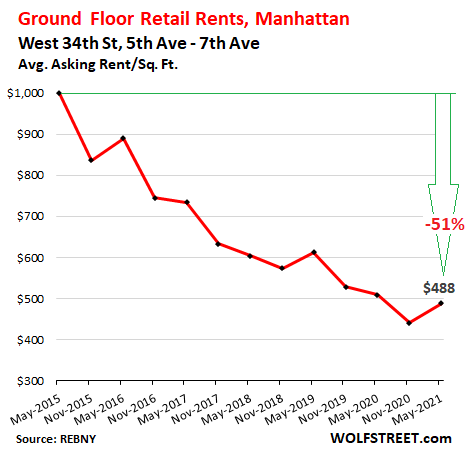 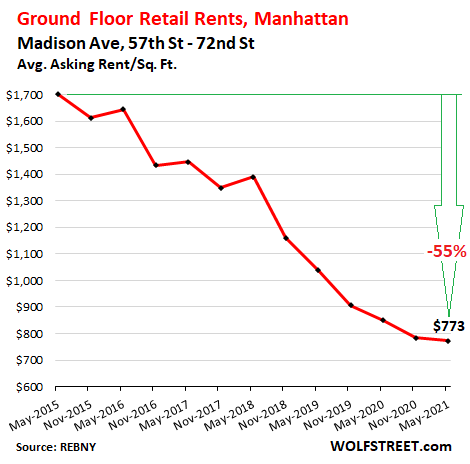 On East 86th Street, between Lexington Avenue and Second Avenue, the average asking rent dropped 9% year-over-year, despite the uptick this spring, to $311/sf, down 32% from 2015. There were 11 availabilities. 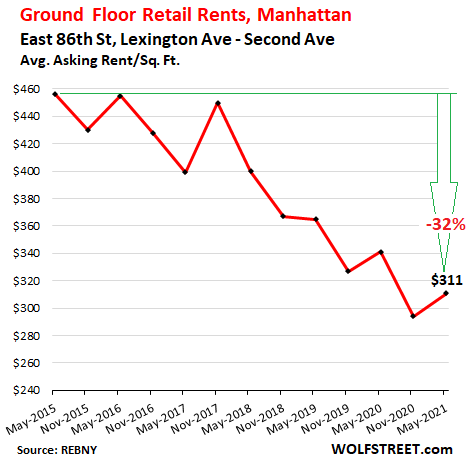 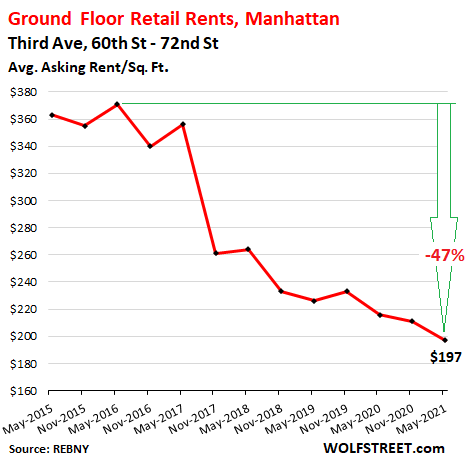 OK, this one is hopping. On Broadway, between Battery Park and Chambers, the average asking rent rose 74% from 2015 through the spring 2020. But over the past 12 months, it backed off its all-time high, and ticked down 3% to $406/sf. And there are now 27 availabilities: 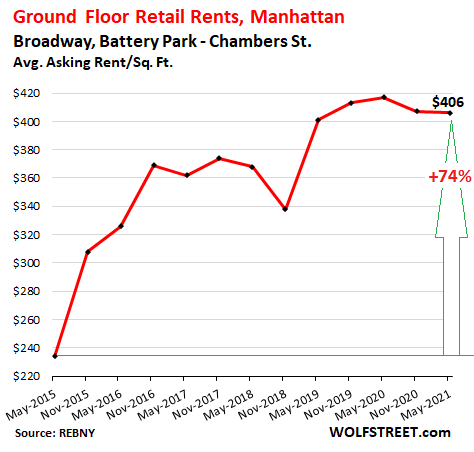 But on Broadway between Houston and Broome, the average asking rent collapsed by 37% year-over-year and by 68% from the peak in 2015,  making it the biggest decliner. There were 31 availabilities: 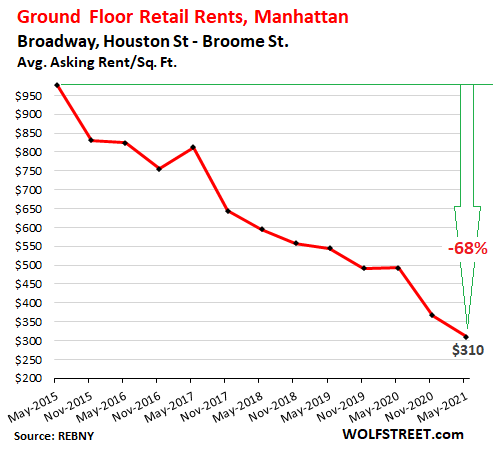 On Bleecker Street, between 7th Avenue and Hudson, the asking rent fell 12% year-over-year and 53% from the peak in 2016, amid 23 availabilities: 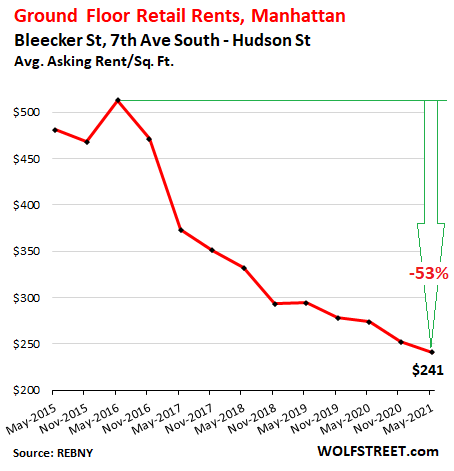 On Broadway between 72nd Street and 86th Street, the average asking rent was flat for the year and down 39% from 2015, amid 26 availabilities: 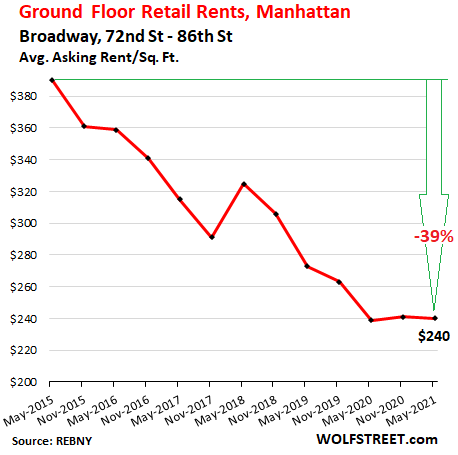 On Columbus Ave, between 66th Street and 79th Street, the average asking rent fell 6% year-over-year and was down 36% from 2015. There were 13 availabilities: 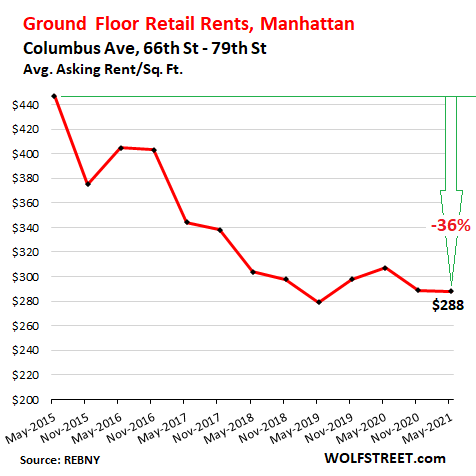 On 125th Street in Harlem, from 5th Ave to Morningside Ave, the average asking rent was down just a tad compared to spring 2015, after some gyrations in the middle. Year-over-year, it fell 8% to $138/sf. There were 14 availabilities. 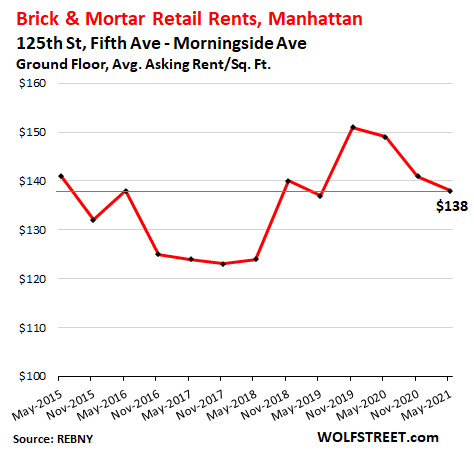 99 comments for “The Breathtaking Collapse of Retail Rents in Manhattan, Year 7”