Sales of “existing homes” performed the same trick. The phenomenon is getting established.

OK, this is now following the same script: Despite supply that has been rising for months, sales of new single-family houses by homebuilders to the public in May fell 6% from the prior month to a seasonally adjusted annual rate of 769,000 houses, down 23% from the recent high in January, according to the Census Bureau this morning. This sharp decline in sales occurred amid spiking prices.

A similar phenomenon has been playing out in “existing” house and condo sales, where inventories rose for the third month in a row, and yet sales dropped for the forth month in a row amid a historic price spike. Something is out of whack.

The sharp drop in sales of new houses over the recent months brought them back to about pre-pandemic levels. And following the construction boom in apartments and condos over the past decade, single-family house sales are far below the boom-and-bust years of 2002 through 2007: 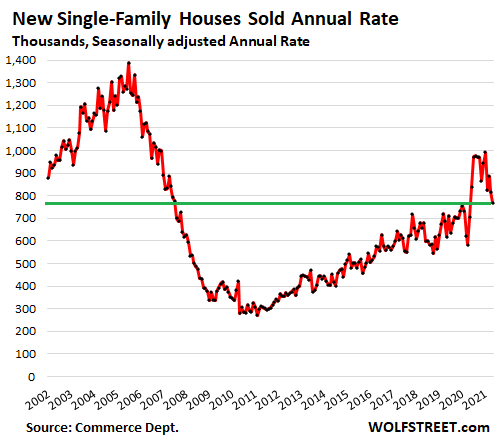 Rising inventories. Homebuilders are busy. They’re building. They’re adjusting to the new market where the sudden burst of working-from-home – potentially a long-term shift for many home buyers – is now being built into the house. And there are plenty of spec homes available for sale.

The number of unsold speculative houses rose for the fifth month in a row to 330,000 houses, seasonally adjusted, at the high end of the spectrum since the housing bust. And supply at the current rate of sales rose to 5.1 months. 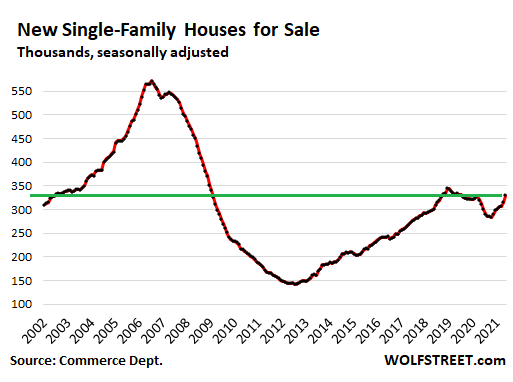 So despite all this, prices spiked – what else is new? We saw this yesterday with sales of existing homes, where prices spiked 24% year-over-year in May, the largest price spike on record, despite rising inventories and sharply lower sales. And we’re seeing the same phenomenon today in new house sales.

The median price of new single-family houses rose 2.5% from the prior month, and spiked 18.1% year-over-year, to a record $374,400, eking past the prior record of January: 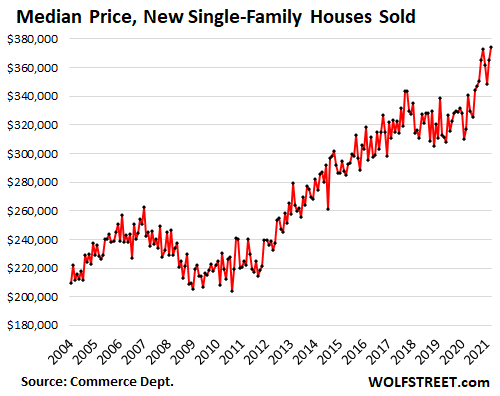 These new houses are sold by homebuilders to the public, unlike “existing” homes, which members of the public trade among each other. This changes the pricing dynamics. When money from the Fed and the government gushes through the streets knee-deep, and when people are looking for larger homes to accommodate one or two offices, then homebuilders attempt to accommodate them, including with higher price tags.

But the number of people willing or able to buy under those conditions is shrinking. Some might be taking a step back to watch this housing bubble from a safe distance. Those are the people that went on buyers’ strike. Then there is also the shift to working from home that may have run its course, with companies switching from remote work to a hybrid model; after the initial flood of work-from-homers was accommodated, the red-hot demand for new single-family houses might now be in the early stages of cooling off.

Whatever causes this sharp decline in sales from the red-hot levels a few months ago both with new houses and “existing” houses and condos, amid rising inventories, indicates that there are potential buyers that have gone on strike under the current market conditions.