House prices in the largest markets have gone nuts amid “extrapolative expectations and speculative behavior,” as the Bank of Canada put it.

The first thing to know about the housing bubble in Canada is what the Bank of Canada has been doing, after its furious bout of QE: In October last year, it tapered purchases of Government of Canada bonds by one notch and also ended buying mortgage-backed securities. In March, it started unwinding its liquidity facilities, citing “moral hazard” as reason. In April, it tapered by another notch its purchases of Government of Canada bonds, citing “signs of extrapolative expectations and speculative behavior” in the housing market.

The assets on its balance sheet have now dropped from C$575 billion in March, to C$478 billion as of May 12: 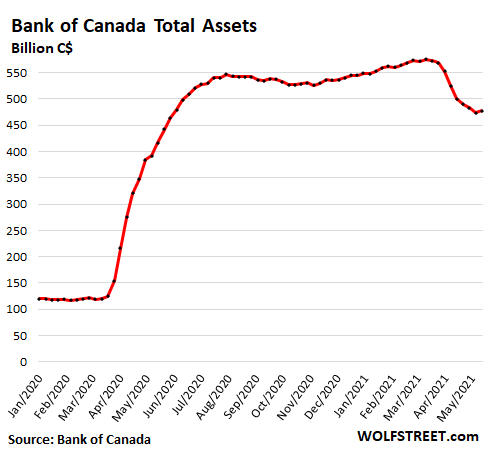 In the Greater Toronto Area (GTA), house prices spiked by 3.0% in April from March, and by 12.3% year-over-year, and have nearly tripled over the past 15 years, according to the Teranet-National Bank House Price Index today.

The index tracks prices of single-family houses through “sales pairs,” similar to the Case-Shiller Home Price Index in the US, comparing the price of a house that sold in the current month to the price of the same house when it sold previously, often years earlier. By tracking how many more Canadian dollars it takes to buy the same house over time, the index is a measure of house price inflation. 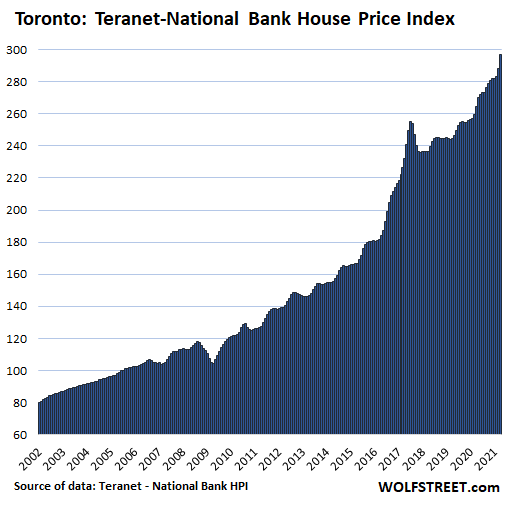 In Greater Vancouver, house prices jumped by 2.0% in April from March and are up 9.4% year-over-year. The Bank of Canada’s pandemic magic has completely turned around the housing bust that had started in mid-2018. The index has more than tripled in 15 years: 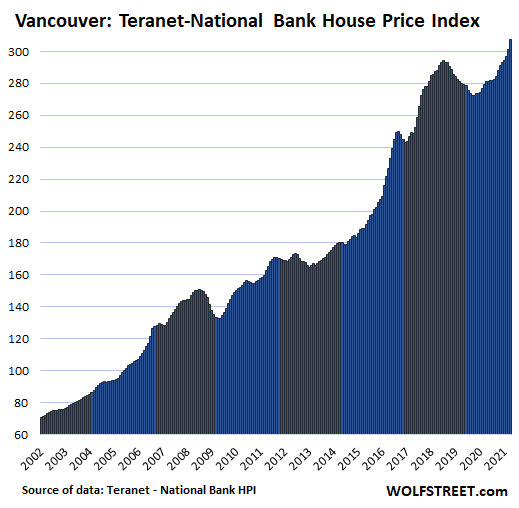 In Hamilton, Ontario, house prices spiked by 2.8% for the month and by a blistering 22.9% year-over-year. Obviously, an exponential increase like this is begging to be knocked over by a central bank worried about “extrapolative expectations and speculative behavior” in the housing market: 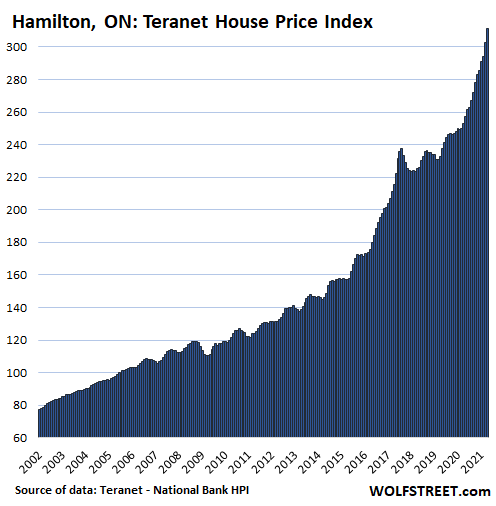 All charts below are on the same scale as those of Toronto, Vancouver, and Hamilton to show how large the house price increases were in each metro compared to the other metros. As we go down the list, the white space gets larger. 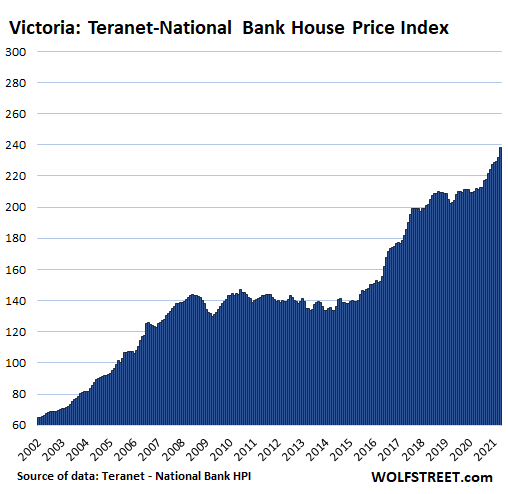 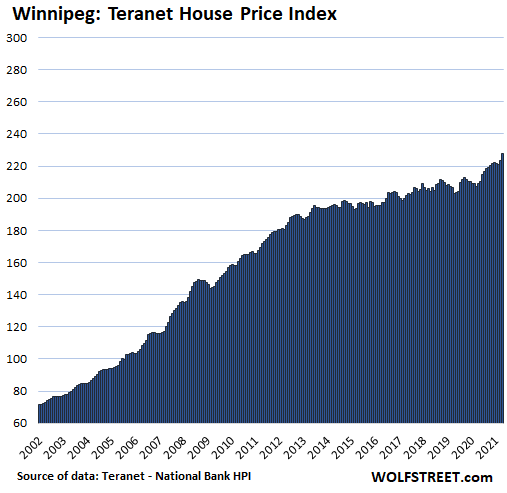 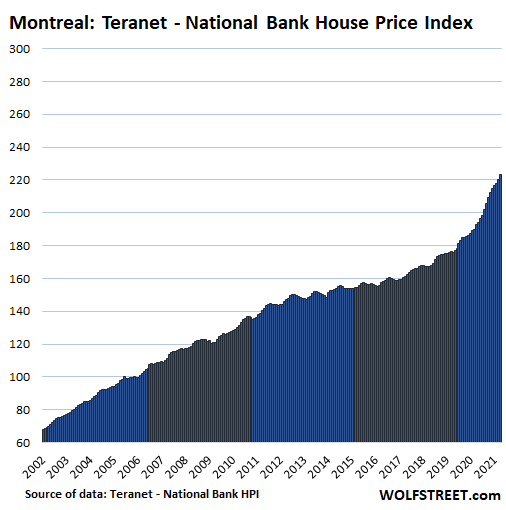 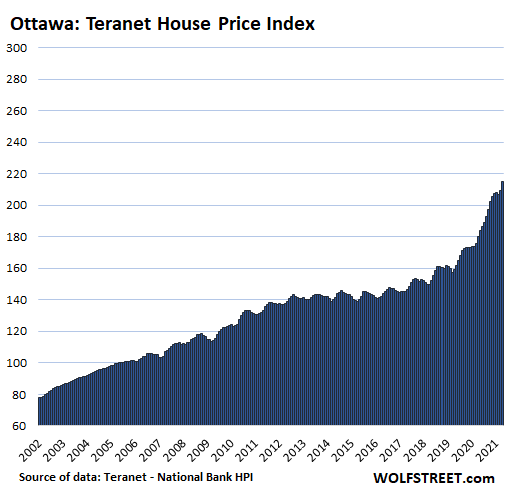 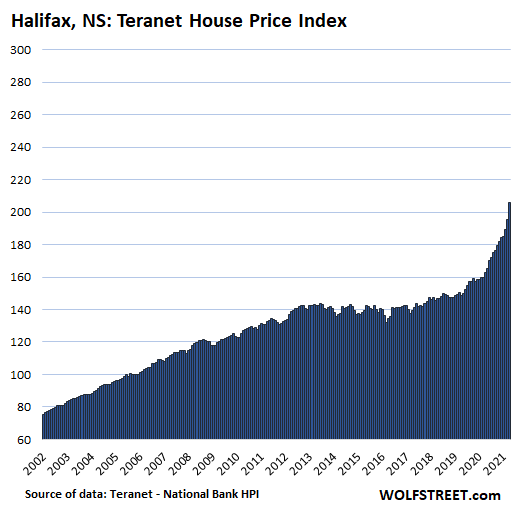 In Quebec City, house prices rose 1.2% in April and 9.1% year-over-year. They have just about doubled in 15 years. 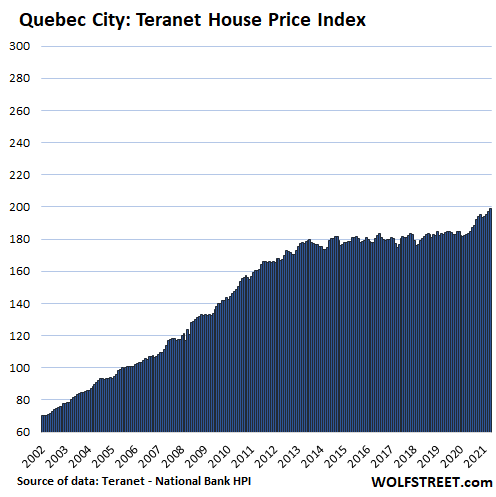 Calgary and Edmonton, the remaining two cities in the Teranet-National Bank House Price Index, are long-term oil-bust epicenters. In Calgary, house prices just eked past the oil-boom peak of 2007; and in Edmonton, house prices are still below the oil-boom peak of 2007. Both of them would be a little out of place on this list of the most splendid housing bubbles in Canada.

132 comments for “The Most Splendid Housing Bubbles in Canada: Even the Bank of Canada Gets Nervous and Tapers”