This is the first time I’ve seen Wall Street banks clamor for the Fed to back off QE. The Fed is struggling to keep the liquidity it created from going haywire.

In the fall of 2019, when the repo market blew out, the Fed stepped in and bought Treasury securities and MBS and handed out cash via repurchase agreements. When these repos matured, the Fed got its money back, and the counterparties got their securities back. The Fed also did this during the market rout in March 2020. But by July 2020, the last repos matured and were unwound.

Now the Fed is doing the opposite, with “reverse repos.” Repos are assets on the Fed’s balance sheet. Reverse repos are liabilities. With these reverse repos, the Fed is now massively selling Treasury securities to counterparties and taking their cash, thereby draining liquidity from the market – the opposite effect of QE. 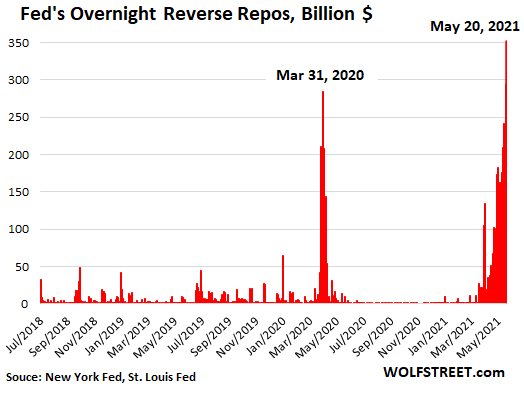 These reverse repos are a sign that the banking system is struggling to deal with the liquidity that the Fed has been injecting via its QE. And that’s in part why there is now some clamoring on Wall Street for the Fed to taper its QE purchases because the banking system is now drowning in liquidity that banks have as reserves on their balance sheet. By buying Treasuries in the repo market, the banks lower their reserves and increase their Treasury holdings.

So with one hand, as part of QE, the Fed is buying $120 billion a month in Treasury securities and MBS. With the other hand, the Fed took back $351 billion via overnight reverse repos, undoing nearly three months of QE.

It’s the kind of crazy situation that you run into when you push something to the extreme, as the Fed has done with its asset purchases, and you get all kinds of side effects.

The Fed addressed these reverse repos and the mountain of reserves during the last FOMC meeting, and released a summary of the discussions in its minutes yesterday. 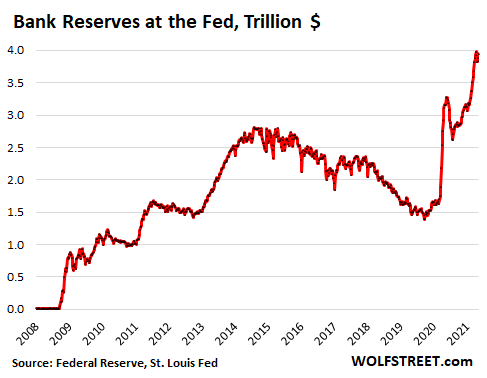 In the FOMC meeting minutes released yesterday, the Fed addressed the ballooning balances of reserves and the huge demand for short-term Treasury securities, which the Fed is helping to provide via reverse repos.

The Fed said that this phenomenon of reverse repos trading at negative rates “appeared to largely reflect technical factors.”

And the Fed announced in the minutes that it would “adjust” – likely raise – the rate it pays on reserves, likely at the next meeting (“more than half” of the survey respondents expected it, it said).

It added that reverse repos on its balance sheet will likely grow further. In the words of the minutes:

“The SOMA manager noted that downward pressure on overnight rates in coming months could result in conditions that warrant consideration of a modest adjustment to administered rates and could ultimately lead to a greater share of Federal Reserve balance sheet expansion being channeled into ON RRP [overnight reverse repurchase agreement] and other Federal Reserve liabilities.”

Banks have shed reserves via reverse repos previously in the era of large reserves, but that happened at the end of the quarter, and particularly at the end of the year. The issue diminished after the Fed started reducing its assets during Quantitative Tightening in 2018 and 2019. But the spike we’re seeing now is happening in the middle of the quarter:

This is the first time that I have seen Wall Street banks clamoring for the Fed to back off QE as the banking system is creaking and straining under the huge pile of reserves. And apparently, from the response disclosed in the minutes, the Fed is figuring out that you can push QE only so far before something big is going to go haywire with unforeseen consequences.

276 comments for “Fed Drains $351 Billion in Liquidity from Market via Reverse Repos, as Banking System Creaks under Mountain of Reserves”