This may be the most distorted and perverse housing market ever.

This is a world of unprecedented Fed intervention, government stimulus, inflation that has turned red-hot this year amid a weird phenomenon of companies complaining about a labor shortage, while nearly 10 million people are deemed “unemployed” and 16 million people are claiming some sort of unemployment insurance. As 2.1 million mortgages are still in forbearance programs, investors have flooded the housing market, including individual buyers grabbing a second home in crazy bidding wars.

But sales have sagged for the third month in a row, while new listings and supply have started to rise from very low levels, and a lot more is coming on the market this year.

Sales of existing homes – single-family houses, condos, and co-ops – dropped by 2.7% in April from March, after the 3.7% drop in March, and the 6.3% drop in February, to a seasonally adjusted annual rate of 5.85 million homes, the lowest since July 2020, according to the National Association of Realtors today. Compared to April 2019, sales were up 11.8%, having now largely unwound the huge spike that started last summer (historic data via YCharts): 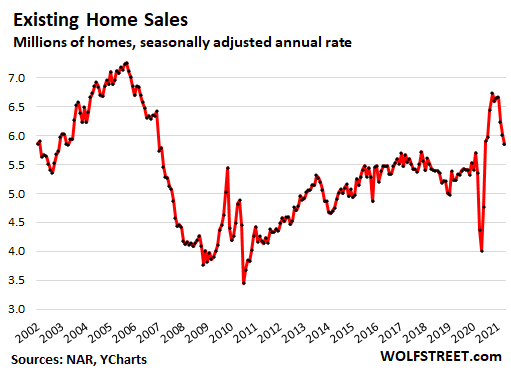 Dallas Fed President Robert Kaplan pointed at the role of these investors in distorting the housing market, and named that as one of the reasons for “talking sooner rather than later” about tapering QE.

“So, we’re in a position where families are being crowded out, or squeezed out, of being able to buy the first home,” he said. “This is an example of an excess, maybe an unintended consequence, a side effect of these extraordinary [monetary policy] actions.”

Buyers’ strike by non-investors in the works? While individual homebuyers are still battling it out with investors in silly and costly bidding wars offering crazy amounts over asking price, there are anecdotal indications that more and more buyers are now staying away from this zoo because they’re exhausted or have reached the end of their financial capabilities or don’t want to end up buying at the most insane peak of the market. For buyers, this is a terrible time to buy a home. And that is becoming increasingly obvious.

For sellers, however, this is absolutely the best time to sell a home.

And sellers are getting ready, more inventory coming.

Inventory of homes listed for sale rose for the third month in a row, to 1.16 million homes, still historically low, but the highest since November. And supply rose to 2.4 months at the current rate of sales, the highest since October (data via YCharts): 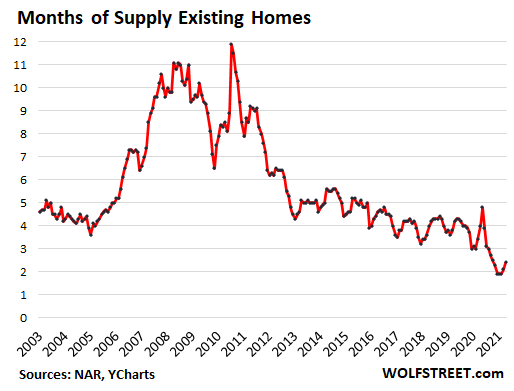 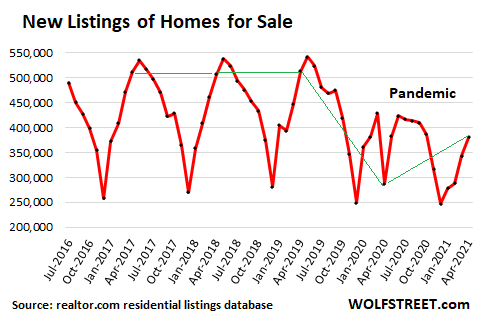 Pent-up sellers. A lot more inventory is coming on the market this year: 10% of homeowners plan to sell their home over the next 12 months, which is 25% higher than the typical share of homes that come to market in a typical year, according to the NAR and Harris Poll in an earlier report, citing their survey of potential home sellers across the US.

Of these potential home sellers, 56% plan to list their home over the next 6 months. And 76% have taken steps to start listing their home.

When vacant homes come on the market, such as the homes that homeowners didn’t sell last year when they bought a new home (the infamous “second home”), it adds supply without adding demand because those homeowners are already living in their new home and don’t need to buy another one.

Buying a home without selling the now vacant home has contributed to the inventory shortage. When these left-behind vacant homes come on the market, it unwinds that shortage. This is the process of shadow inventory becoming real inventory. 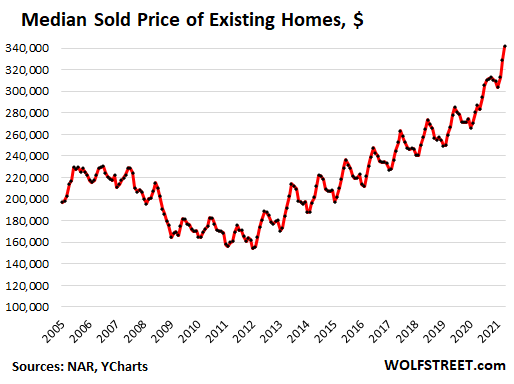 The winner in these crazy bidding wars isn’t the buyer. It’s the seller… THE WOLF STREET REPORT: It’s a Perfect Time to Sell a Home (to FOMO-Driven Buyers)