QE from crisis to crisis, and even when there is no crisis.

The Fed’s total assets on its balance sheet for the week through Wednesday, May 5, fell by $10 billion from the prior week and by $40 billion from the record two weeks earlier, to $7.77 trillion. Over the 14 months since the crazy money-printing show has started, the Fed has piled $3.53 trillion in assets on top of its existing mountain.

But wait… Since the repo market blew out in September 2019, this can-do Fed has added $4.0 trillion to its balance sheet, more than doubling it in 18 months. That’s how nuts these efforts have been to bail out the biggest speculators, inflate the biggest Everything Mania, and create the biggest wealth disparity America has ever seen, all of it in the shortest amount of time: 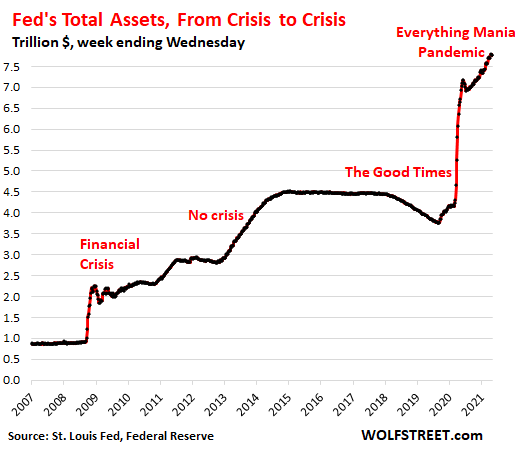 But the Fed has let most its alphabet soup of bailout and liquidity programs expire, run off, or languish on ice. Some of them are now zeroed out. What the Fed is still buying in large amounts are Treasury securities and residential mortgage-backed securities (MBS) amid this red-hot-crazy Everything Mania, from cryptos to housing.

This is the detail view of the Fed’s total assets since early 2020. The $40-billion dip over the past two weeks is barely visible amid the pile of trillions: 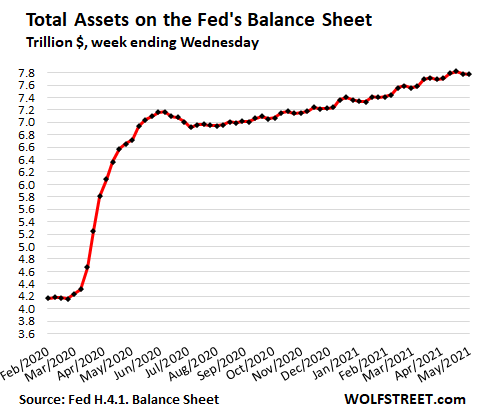 The Fed has been adding Treasury securities at a steady pace of around $80 billion a month, following its initial blast last spring, bringing the 14-month total addition to $2.54 trillion, more than doubling its Treasury holdings over the period and breaching $5 trillion: 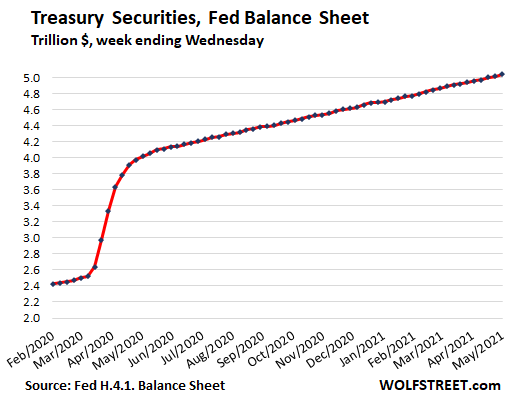 Why the heck is the Fed still buying any MBS?

The US housing market has spiraled totally out of whack, and yet the Fed keeps adding mortgage-backed securities to its pile, now at $2.2 trillion, to push down mortgage rates and pump up housing prices.

The MBS balance moves in a weekly zigzag. Holders of MBS receive pass-through principal payments as the underlying mortgages are paid down or are paid off. The Fed buys MBS in the “To Be Announced” (TBA) market to replace the pass-through principal payments and to increase its balance. But trades in the TBA market take months to settle, and timing differences create the zigzags. It’s the trend that matters.

Since July last year, the balance has increased at a rate of about $27 billion per month: 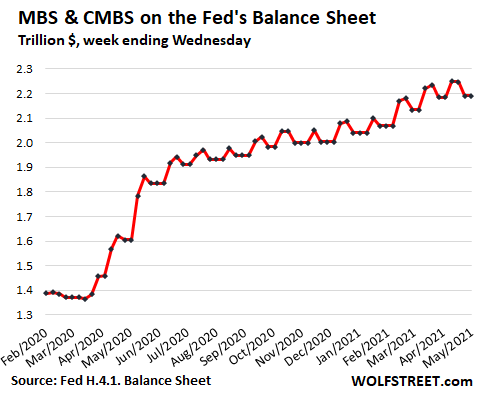 OK, here we go down into the rabbit hole of bonds. The Fed’s balance sheet shows $350 billion “unamortized premiums,” which have been declining in recent weeks. They track the premium over face value that the Fed has paid for the securities it bought in the market. When these securities mature, the Fed receives only face value. The premium then vanishes. The Fed tracks this difference separately.

Every bond investor who buys bonds in the market goes through this. During this time of low interest rates, when you buy a 10-year Treasury security that was issued a few years ago with a coupon interest payment of $30 a year per $1,000 bond (3% coupon), you’re going to have to pay a premium to get these $30 coupon interest payments. And when the bond matures, the premium is gone, and you only get the face value ($1,000) of the bond.

The Fed tracks this separately. As these bonds mature – these are Treasury securities and MBS – the premium that the Fed paid for these bonds goes to zero. 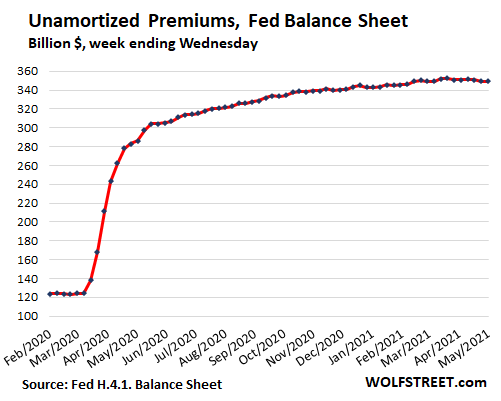 The Fed still offers repos, but at a bid rate that is not competitive with the market, and there have been no takers since last summer, when all repos matured and unwound, with the Fed getting its money back, and counterparties getting their securities back: 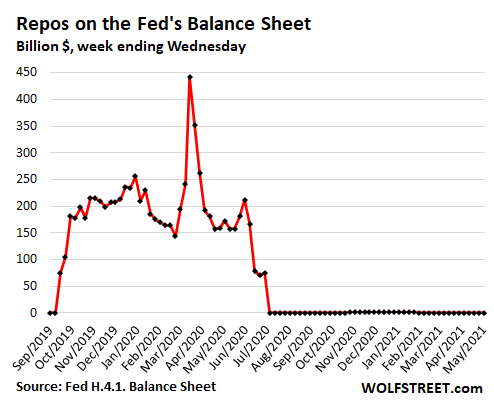 Central-bank liquidity-swaps drop to near nothing.

Under this swap program, which still exists but is no longer used, the Fed offers dollars to 14 other central banks in exchange for their currency. Nearly all these swaps, which peaked at $450 billion last June, matured and were unwound: 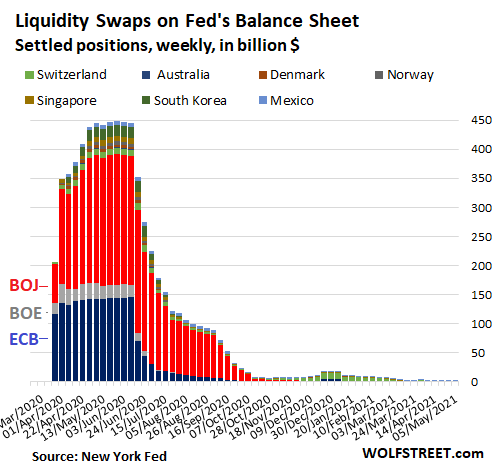 In the early weeks and months of this craziness, the Fed created Special Purpose Vehicles (SPVs) as legal entities that can buy assets that the Fed is not allowed to buy otherwise, including corporate bonds, even junk bonds, bond ETFs, junk bond ETFs, auto-loan backed securities, municipal bonds, corporate paper, PPP loans, etc. The Fed lends to the SPVs, and the Treasury Department provides equity funding that would take the first loss.

Most of these SPVs have either expired or are on ice, with balances declining or having already fallen to zero. The exception is the PPP liquidity facility (red), which the Fed extended through June. This SPV buys PPP loans from banks and is still growing, now at $76 billion, bringing the total value of these SPVs to $158 billion: 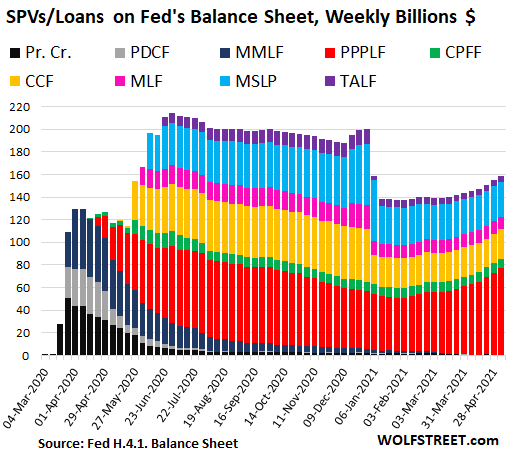 202 comments for “Fed’s QE amid “Everything Mania”: Total Assets $7.8 Trillion, More than Doubled in 18 Months since Repo Market Blowout”