The Fed provides the data quarterly, I dissect it at the stunning per-capita level.

The Federal Reserve is pursuing monetary policies that are explicitly designed to inflate asset prices. The rationalization is that ballooning asset prices will create the “wealth effect.” Today we will see the per-capita progress of that wealth effect – what it means and what it accomplishes – based on the Fed’s wealth distribution data through Q4 2020, and based on Census Bureau estimates for the US population over the years. Here are some key results. At the end of 2020, the per-capita wealth (assets minus debts) of: 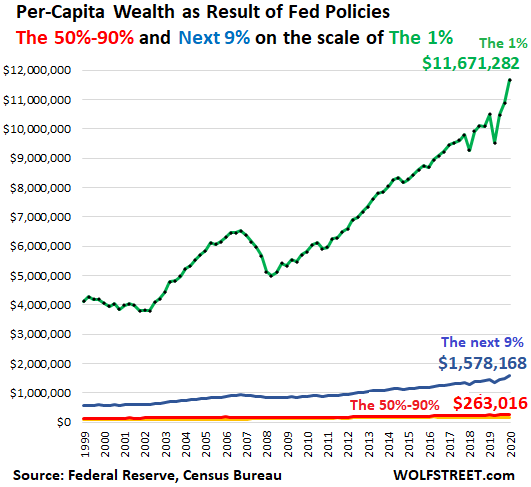 Among the bottom 50%, there are still large differences: The group ranges from the homeless and the desperately poor, to those at the upper levels of the bottom 50% that have a small-ish 401k and some equity in a house. 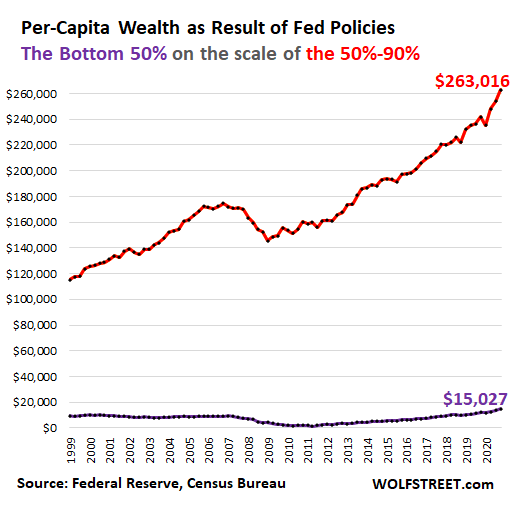 Real estate is the largest category at $23,457 per person (black line in the chart below). What this means is that relatively few households in the bottom 50% own real estate.

So when the Fed inflates the housing market, most people in the bottom 50% don’t benefit because they don’t own a home. But they have to pay more to rent, and they get further locked out from buying a home.

The second largest category at the bottom 50% is durable goods of $8,899 per person, such as appliances, cars, and cellphones (green line). That amount ticked up over the last three quarters as folks used their stimmies from the government (not the Fed) to buy some durable goods.

Stocks and mutual funds, the smallest category of the assets, account for only $1,131 per person (red line). So when the Fed inflates the stock market, the bottom 50% don’t benefit at all. That’s reserved for the top 10%: 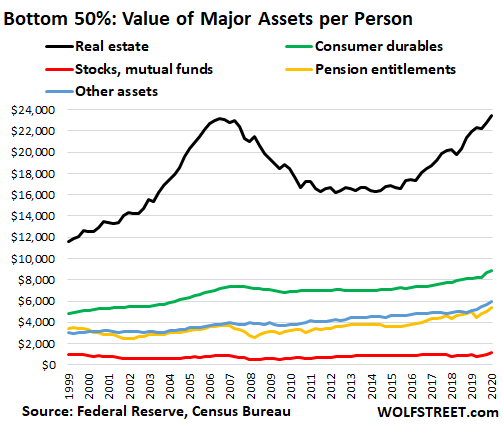 But the bottom 50% do have a lot of debt, relatively speaking, particularly consumer debt – auto loans, student loans, and revolving debt such as credit cards. In 2018, on a per-capita level, the amount in consumer debt and other debt surpassed mortgage debt and reached $15,990 per person at the end of 2020: 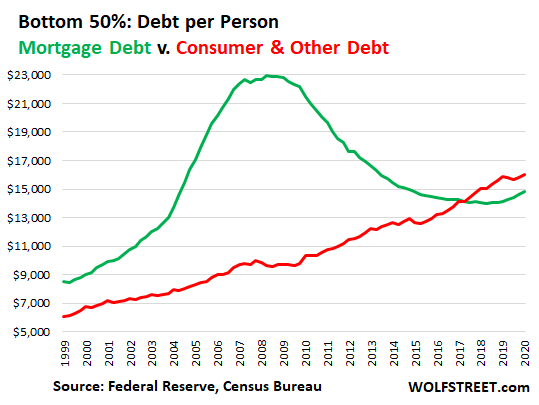 The wealth effect was designed for the top 10%. At the bottom 50%, their financial well-being got intentionally gutted by the higher costs of living that the Fed’s asset price inflation has caused.

In 2017, Fed Chair Yellen saw perhaps that the wealth effect had gone far enough and started backing off by reducing the balance sheet. And Fed Chair Jerome Powell continued backing off the wealth effect and reducing the balance sheet. But when stocks were spiraling down and long-term interest rates were surging, and mortgage rates hit 5%, and the housing market was starting to wobble, Trump, who’d taken ownership of the DOW, started lashing out at Powell amid rumors that he was discussing firing him. It didn’t take long for Powell to cave and do his infamous 180 in 2019.

And then in the spring of 2020, Powell showed his true colors as the wealthy suddenly found themselves a little less wealthy. All heck broke loose at the Fed to correct that oversight and push the wealth of the top 10% to new historic highs and thereby push the disparity between the top 10% and the rest of the Americans, and particularly the bottom 50%, into the stratosphere.

This is an effective way to tear a country apart.

Over the same period, the “wealth” of the bottom 50% increased by $3,152 per person, largely due the crumbs handed out by the government (not the Fed), including the stimmies.

Not to speak of the wealth disparity between the 1% and the bottom 50% that ballooned by $1.1 million per person.

The Fed is trying to cover it up with its ludicrous rhetoric. Politicians in Washington of all stripes – who could stop the Fed’s policies with legislation – are fully on board with the wealth effect because they’re among the primary beneficiaries. And to heck with the bottom 50%.

Not even populists on the left and the right, whose base is getting hit over the head on a daily basis by the wealth effect, are decrying the Fed’s policies. On the contrary.

There is now one nuance of difference between the left and the right in terms of the wealth effect: Now the left wants the top 10% to surrender a few crumbs of the wealth effect to the bottom 50%, which has triggered an outcry on the right. But beyond the outcry over a few crumbs, they’re all singing wealth-effect hallelujah from the same page of the Fed’s song book.

In an op-ed, Powell rationalized and defended these policies. Gimmie a break, will ya? Read...Powell in WSJ Op-ed: “I Truly Believe that We [the Rich] Will Emerge from this Crisis Stronger and Better, as We [the Rich] Have Done so Often Before”

333 comments for “I Now Track the Most Important Measure of the Fed’s Economy: the “Wealth Effect” and How it Impacts Americans Individually”