The bizarre phenomenon of companies complaining about “labor shortages” amid dropping job applicants, while 9.8 million are “unemployed,” and 16.2 million people claim unemployment benefits.

Employers of all types – companies, governments, and nonprofits – reported that they added only 266,000 workers to their payrolls in April, according to the Bureau of Labor Statistics today. This contrasted with the ADP Employment Report yesterday that found that 742,000 private sector jobs had been created, based on payroll data. The total number of jobs at these establishments, at 144.3 million, was still down by 8.2 million from February 2020 (green line).

Households reported that 328,000 more people were working in April than in March, including self-employed workers, bringing the total number of workers to 151.8 million, according to the BLS’ household surveys, still down by 7.6 million from February 2020 (red line): 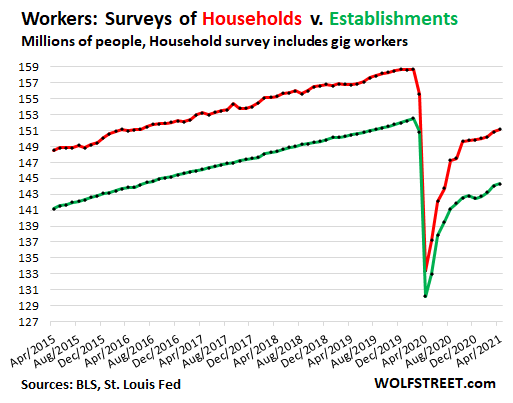 According to the BLS today, the number of unemployed rose by 102,000 people in April from March, to 9.8 million people. But wait…

Job openings in April surged 22% since the beginning of the year, hires are up 18%, and job applications plunged 23%, according to the April report by recruiting platform iCIMS, among whose 4,000+ clients are 40% of the Fortune 100 companies.

In the four big states, the number of job applications declined by:

The Federal Reserve in its April Beige Book, said that a “majority of its contacts” in a wide variety of industries, reported “labor shortages” as one of the big headwinds. “Employers in technology, construction, and transportation reported being especially constrained by labor shortages.”

The Job Openings and Labor Turnover Survey (JOLTS), which lags by two months, reported that in February, there were 7.4 million job openings – more than there had been in February 2020 before the Pandemic. March and April data hasn’t been reported yet, but this was when large swaths of the restaurant industry, gyms, etc. re-opened.

According to the Department of Labor yesterday, there are still 16.2 million people who are claiming unemployment benefits under all state and federal programs.

The federal government is paying an extra $300 a week on top of the regular unemployment benefits, which allows many lower-wage people to make more money on unemployment than they would earn if they got a job.

This opens up the issue of pay. Employers have to compete with the additional unemployment benefits, but they’re reluctant to raise pay because it substantially increases what for many companies is their largest expense. Some have raised pay, including Walmart and Amazon. Others are trying one-time hiring bonuses.

Broadly raising pay for workers, especially at the lower half of the income spectrum, would be a great thing for workers (=consumers) and for the overall economy as these folks would spend more. But it would squeeze business profits, and businesses are careful and reluctant when going that route.

Would the “labor shortages” just vanish if companies broadly and substantially raised their pay scales? I suspect that the answer would be “yes,” but it wouldn’t resolve all problems.

Over the past few months there have been numerous surveys, indicating how people are struggling with issues that prevent them from looking for a job. This includes parents who said that they cannot go back to work because schools hadn’t fully reopened.

Then there are the issues of skill mismatches, and changed needs for skills that people cannot quickly learn.

What to make of this bizarre phenomenon of companies struggling to hire people and complaining about “labor shortages,” while 9.8 million more people are considered unemployed, and while 16.2 million people are still claiming unemployment benefits? 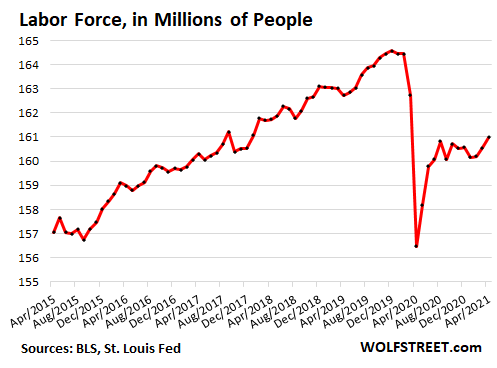 There were big employment gains in the leisure and hospitality industry, other services, and local government education. But there were employment declines in temporary help services and in couriers and messengers, the BLS pointed out.

So restaurants and hotels reopened and tried to hire people back, as Americans went on trips and flocked to restaurants more often, instead of staying home and ordering food via delivery?

Restaurants in San Francisco have been very busy, and eating outside in the 1,200+ “parklets” is a blast. But in turn, delivery drivers and others involved in the online dining experience, so to speak, may have run out of work or returned to their pre-Pandemic jobs working in those establishments that have now reopened. Some of this is a zero-sum game.

Of the unemployed, the number of people on temporary layoff or furlough rose by 88,000 in April to 2.11 million people. But March, at 2.03 million, had been the lowest since February 2020. So this was a small setback after a massive improvement (green columns). 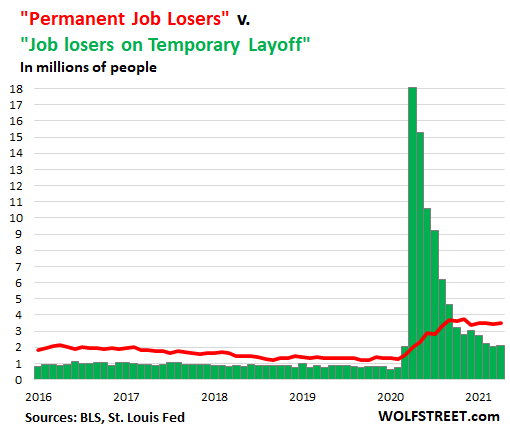 The employment-population ratio, which compares the number of working people to the working-age population (16+ years old), ticked up to 57.9% but remains dismal. It had been dismal even before the Pandemic, having peaked two decades ago.

It always drops during a recession. But since 2000, the ratio did something new: It never fully recovered before the next recession knocked it down again, starting a trend of lower highs and lower lows.

Much of this two-decade trend has to do with how companies react during recessions: They cut costs by offshoring work to cheap countries, not just manufacturing, but also coding, research, engineering and design (including for the auto industry), healthcare, legal work, and the like: 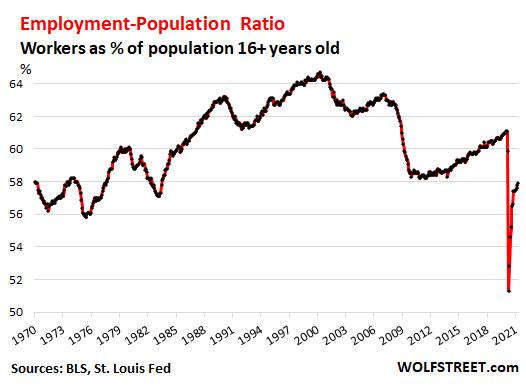 193 comments for “Unemployment Crisis, “Labor Shortage,” or Out-of-Whack Labor Market – Which Is It?”