The American labor market has been roiled by a bizarre phenomenon: 9.8 million people are deemed to be officially “unemployed,” and 16.2 million people still claim state or federal unemployment compensation, including the extra $300 a week in federal benefits that allow a lot of people to make more money from unemployment compensation than from working. At the same time, there are reports that job applicants have dropped for job openings, that companies are complaining about “labor shortages,” and that, today, unfilled job openings have spiked in a historic manner. 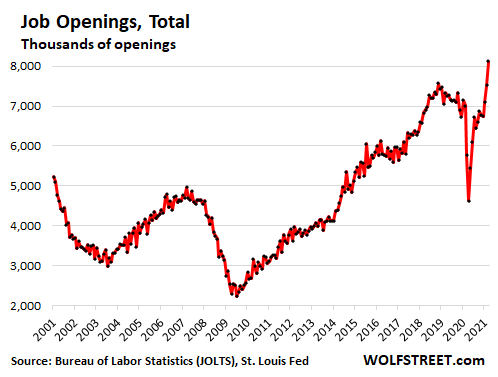 In manufacturing, unfilled job openings exploded in March amid a widespread chorus among manufacturers that they’re having trouble hiring the people needed to meet the surging demand for their products that has been fired up by stimulus payments.

Manufacturing jobs are not low-wage jobs. And this difficulty to fill jobs comes after two decades of valid complaints that too much manufacturing activity has been offshored to cheap countries.

Job openings in Manufacturing spiked in March by a huge all-time record of 134,00 jobs from February, to a record 706,000 job openings: 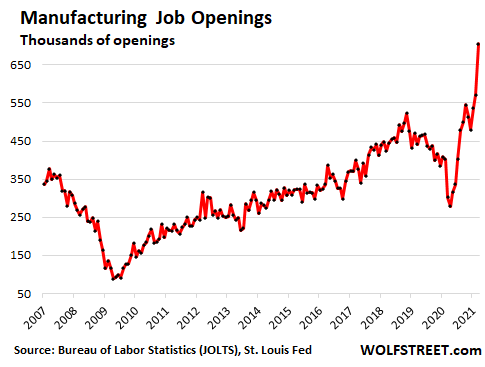 Compare the job openings to the number of people currently working in manufacturing – the jobs that manufacturers could actually fill — which dipped in April to 12.2 million people, according to the BLS jobs report. Compared to February 2020, the last month of the Good Times, this was down by 515,000 workers. And yet there are 706,000 unfilled jobs, which, if they were all filled, would push manufacturing employment to highs not seen since 2008: 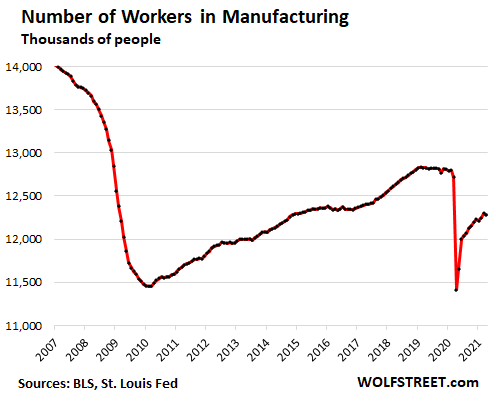 Job openings in the Leisure and Hospitality sector – about 75% of which are in food services and drinking places – jumped to an all-time high of 1.21 million in March (seasonally adjusted), and were up 18% from March 2019: 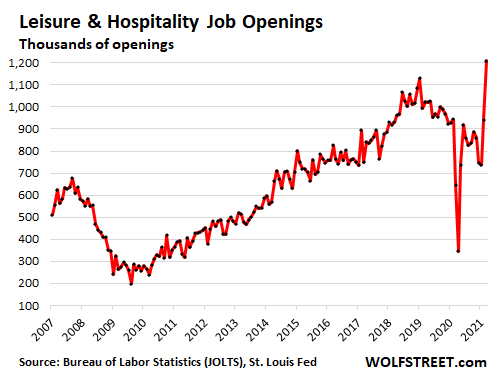 Job openings in the Arts, Entertainment, and Recreation sector spiked in a historic manner over the past two months to 215,000 unfilled jobs, more than double the openings in March 2019: 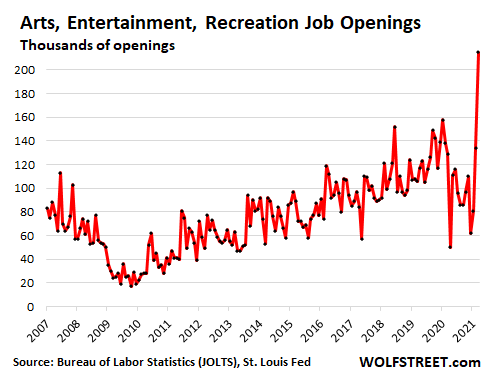 In the Education and Health Services sector, job openings fell in March from the all-time record in February but remained the second highest ever at 1.43 million openings, and up 4.3% from March 2019: 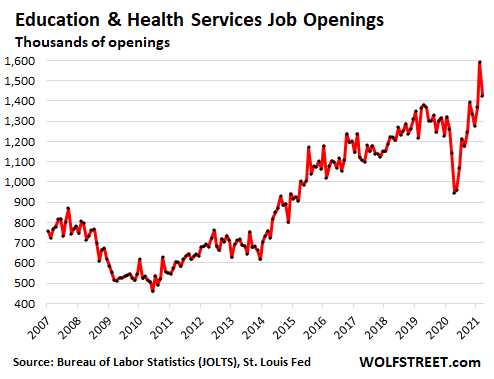 In the Retail Trade sector, job openings jumped to 878,000, but that was down 15% from the peaks in 2018. This includes new and used vehicle auto dealers, whose business is booming, and it includes grocery stores, and other retail segments that are going strong. But the mall retail business, as far as it still exists at all, has been obviated by ecommerce and is struggling to manage the decline, and the Pandemic sped up the process that started many years ago.

Job openings in Construction in March rose to 344,000 openings, about level with March 2019.

In the Professional and Business Services sector, job openings spiked to a record in December, barely edging out the prior record of March 2016, but has ticked down since then to 1.36 million jobs, still among the highest levels ever.

Job openings in Finance and Insurance were at a relatively low level of 262,000 openings in March, down about 25% from the top of the range of 350,000+ openings over the years. These companies have been able to fill their jobs during the Pandemic, and working from home has kept this sector from massively shedding jobs to begin with.

In the Information sector, job openings, at 98,000, hovered at the lower end of the multiyear range, as the sector didn’t shed many jobs and was largely able to fill the job openings as needed.

In Mining and Logging, including oil and gas drilling, job openings jumped to 31,000, from 18,000 openings in February, but remained within the wide range, and down some from March 2019.

Small businesses in particular. Separately, the NFIB Small Business Optimism Index was also released today, and its sub-index of “Current Job Openings” that these small businesses want to fill but “are currently not able to fill,” has spiked for three months in a row to a historic high: 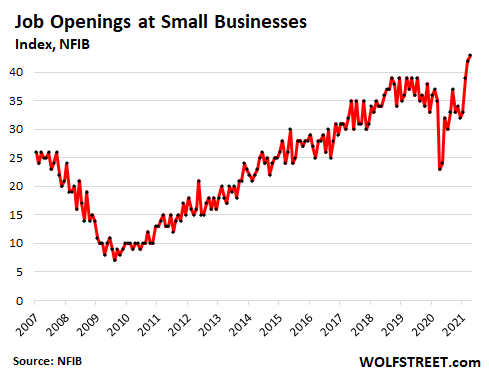