And there are some whoppers.

The New York Fed’s Survey of Consumer Expectations for April, released today, showed that median inflation expectations for one year from now rose to 3.4%, matching the prior highs in 2013 (the surveys began in June 2013).

But wait… the median earnings growth expectations 12 months from now was only 2.1%, and remains near the low end of the spectrum, a sign that consumers are grappling with consumer price inflation outrunning earnings growth. The whoppers were in the major specific categories. 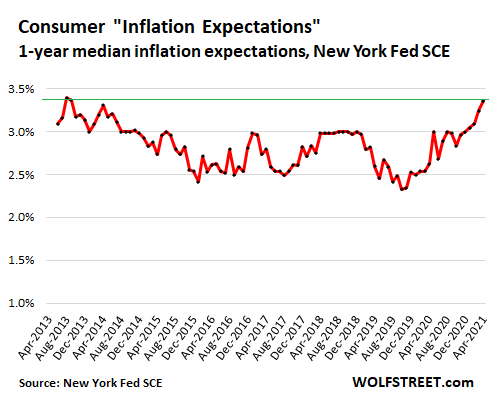 So even as consumers expect their earnings to grow by only 2.1% over the next 12 months, and their total household income by only 2.4%, according to the survey, they expect to face these whoppers of price increases:

Sadly, the Fed doesn’t ask consumers about their expectations for new and used vehicle prices, which are now in the process of spiraling into the stratosphere. It would have been amusing to see what consumers expect those prices to do over the next 12 months.

Higher inflation expectations are associated with consumers being more willing to pay for price increases, rather than go on buyers’ strike. And by not going on buyers’ strike when prices rise, they allow companies to jack up prices, and thereby they allow inflation to run higher, in theory at least, and that is why the Fed is watching inflation expectations so carefully. In theory, they open the door to actual inflation.

Never in my life has the Fed ever been so explicit about purposefully firing up consumer price inflation, and thereby crushing the purchasing power of labor that has to pay for these surging consumer prices. But that’s the Fed we got now, and consumers – though they might not see the Fed or know what it does – are starting to expect these price increases too.

The bizarre phenomenon of companies complaining about “labor shortages” amid dropping job applicants, while 9.8 million people are “unemployed,” and 16.2 million people claim unemployment benefits. Read… Unemployment Crisis, “Labor Shortage,” or Out-of-Whack Labor Market – Which Is It?

278 comments for “Consumers Expect Surging Inflation to Crush the Purchasing Power of their Labor: Fed’s Survey”