Mortgage applications spike to record, while 130,000 homeowners are on mortgage holidays, 500,000 on tailored payment plans, and over 1 million are in unmortgageable apartments due to the flammable cladding crisis.

Net mortgage borrowing in the UK hit £11.8 billion in March, the strongest since the series began in 1993, according to Bank of England data. The previous peak was in October 2006 (£10.4 billion), when the UK was in the grip of the pre-financial crisis bubble. The difference between then and now is that back then the economy was about to fall off a cliff, whereas now it has already fallen off a cliff, having last year suffered its biggest drop in economic output in 300 years. 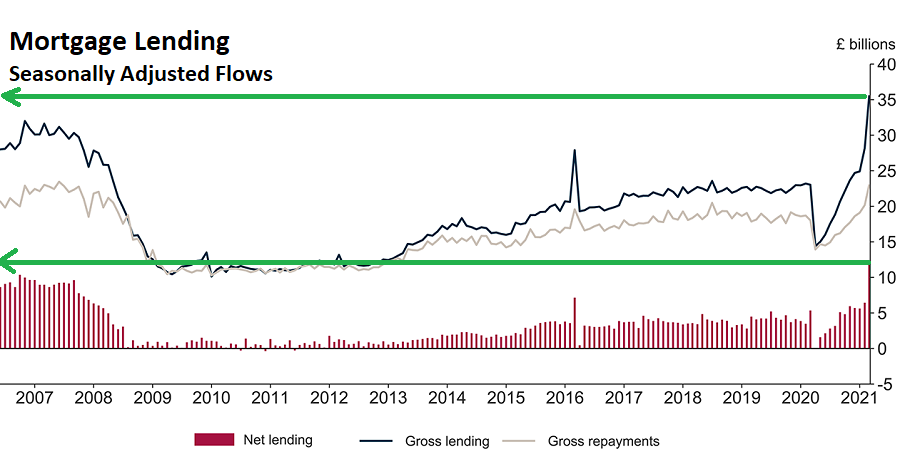 The UK’s biggest lender HSBC said it doled out more mortgages in March than in any other month of more than 40 years offering home loans.

There are plenty of reasons for this lending boom, including the ongoing exodus from the cities to the villages of rural England, even as London’s population is shrinking for the first time in 30 years, and rents have been falling for 13 straight months.

But home prices are also rising, albeit less steeply, in London and other major cities. In April 2021 Chestertons reported 65% more buyer enquiries in London, 75% more sales agreed and 90% more sales completed than in April 2019. These findings chime with HMRC’s latest figures, which show record transactions numbers in March across the UK – up 93% from 2019.

The most important reason for the surging volume of residential property transactions is the support provided by the Bank of England and UK government to property buyers and investors.

In mid-March 2020, as it grappled with the early fallout of the virus crisis, the BoE slashed the UK’s base interest rate from 0.75% to 0.25%, then a week later to 0.1%, the lowest ever. The rate cut was in response to the economic stress caused by the shutdown of the UK economy. And the falling mortgage rates have stoked demand for housing.

The government too has pursued policies aimed at inflating the housing market and propping up the mortgage lending industry. First, it introduced a stamp duty holiday that was supposed to end at the end of March but was extended at the last minute til the end of June. This has driven much of the recent surge in new mortgages.

Then, last month, the Chancellor announced the launch of new government-backed mortgages with 5% down-payments. If borrowers default on the mortgages, taxpayers rather than the banks will be on the hook. Here’s what the government had to say at the launch of the lending program:

“First announced at the Budget, the scheme will help first time buyers or current homeowners secure a mortgage with just a 5% deposit to buy a house of up to £600,000 – providing an affordable route to home ownership for aspiring home-owners.

“The government will offer lenders the guarantee they need to provide mortgages that cover the other 95%, subject to the usual affordability checks.”

The government admitted that the COVID-19 pandemic “has led to a reduction in the availability of high loan-to-value (LTV) mortgage products, particularly for prospective homebuyers with only a 5% deposit.”

Banks, it seems, are no longer offering the 95% or 100% deals on mortgages to first-time homeowners that were essentially guaranteed by parents or other family members. You can’t exactly blame banks for tightening their lending standards. Given the acute economic uncertainty that continues to prevail even as the UK economy begins to reopen, it’s not easy to tell who will still be solvent in a year or two’s time.

So the government is committed, it says, “to supporting people who aspire to become homeowners, helping over 685,000 households to purchase a home since 2010 through government backed schemes including Help to Buy and Right to Buy.”

The government’s own National Audit Office had found that the Help to Buy scheme dished out billions of pounds of publicly subsidized loans to relatively well heeled homeowners who were perfectly capable of buying their first property without need for outside help. As of 2018 only 37% of the roughly 210,000 people who had benefited from Help to Buy would not have been able to afford a property without it.

In the Help-to-Buy scheme first-time property buyers got to put down a deposit of as little as 5% on a new-build home worth as much as £600,000 and received an “equity loan” from the government. The loan covered between 20%-40% of the property price depending on its location. The rest of the financing was covered by a traditional mortgage.

Now the government is going the full hog and offering to subsidize mortgages with 5% down payments for first-time buyers. Banks such as Lloyds, Santander, Barclays, HSBC and NatWest are already offering the mortgages. And they’re also slashing their mortgage rates. Presumably, they are also loosening their lending standards. After all, it’s the government’s problem — not theirs — if a borrower defaults.

But no cost is too high when it comes to sustaining the UK’s all-important housing bubble. And for the moment it’s working: according to the mortgage lender Nationwide, in April, the average UK house price jumped 2.1% compared with March, the biggest monthly rise recorded in 17 years.

This comes as some 130,000 homeowners were still on mortgage holidays as of March, according to trade body UK Finance. Another 500,000 people are on tailored payment plans with their banks. There are also over a million people trapped in unmortgageable apartments due to the flammable cladding crisis, which is already having an effect on prices at the lower end of the market, where the specter of forced sellers looms large. By Nick Corbishley, for WOLF STREET.