The used vehicle price spike will subside, partially, but the psychological aspects of inflation have set in.

Ford announced on Wednesday that it would cut production at eight US assembly plants in July and into August due to the semiconductor shortage. These production cuts will hit numerous vehicle lines, including the crucial F-150. Due to an “unrelated part shortage,” production of the Ranger mid-size pickup and the Bronco SUV will also be down for three weeks in July. This comes after the company said in April that it would cut its global production by about 50% in Q2, which just ended.

Other automakers have been struggling too with supply chain entanglements and the semiconductor shortage. And the supply crunch continues. Over the next few days, we’re going to see auto sales for June. Auto sales to retail customers had been strong earlier in the year, but June sales were handicapped by widespread inventory shortages of hot models.

Today we’re going to look at prices and profits in June. And there have been huge moves.

Vehicle purchases are discretionary for most people. Most people can wait a year or two or three before buying a new or used vehicle and just keep driving what they have. People did this during the Financial Crisis, and auto sales collapsed and stayed down for years. Today, the opposite is the case: Prices are soaring and consumers – those that are buying, and there are enough of them – are eager to pay mind-boggling amounts.

There have been numerous reports that consumers are now willing to pay over sticker price for a new vehicle to grab the new vehicle that they want, instead of waiting a year or two – the very consumers who’ve been trained to haggle hard.

So the average transaction price (ATP) of new vehicles in June jumped 14.9% from a year ago, to $40,206, according to J.D. Power estimates. The surging ATP is a measure of price increases, reduced incentives by automakers, and customers getting shifted into more expensive models: 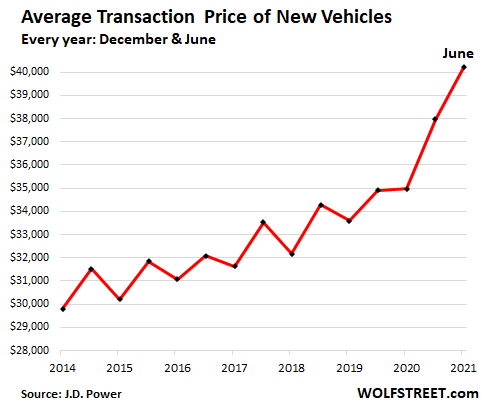 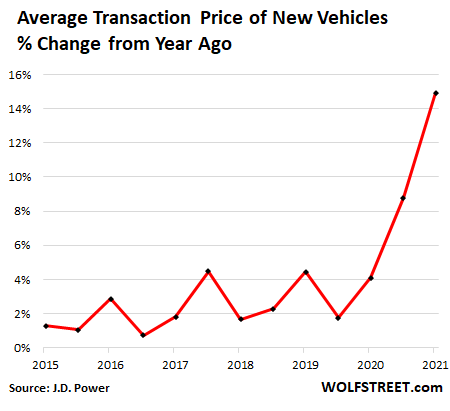 For Q2, consumers spent $150 billion on new vehicles, up 28% from Q2 in 2019, according to J.D. Power estimates. This spending lust, as we’re now going to call it, is producing huge gross profits for dealers and manufacturers.

Dealer profits per new vehicle sold – which includes gross profit from the vehicle plus the profit from finance and insurance – have more than doubled year-over-year in June, to a mind-boggling all-time high of $3,908 per unit.

Total profits from new vehicle retail sales in June for all dealers combined have jumped by a mind-boggling 175% from June 2019, to $4.4 billion. If “mind-boggling” is cropping up a lot here, it’s because that’s what it is.

That consumers allow dealers to make that kind of mind-boggling profit per unit shows that the normally tough, astute, and haggle-eager American car and truck buyers have become laydowns. Most of them could have waited a year or two before having to buy a vehicle. But no. Suddenly price doesn’t matter – and that’s a scary thought from an inflation point of view.

Automakers’ profits from retail sales in June are also expected to hit a record, a result of the shift to high-priced vehicles and reduced incentives. Incentives plunged by over 40% from June 2019, to $2,492 per vehicle, the second-lowest on record for any June, according to J.D. Power estimates.

In addition, automakers have put fleet sales, which are typically low-profit-margin sales, on the back burner, which rental car companies have been complaining about for months. They’re focused on building expensive high-profit-margin vehicles for retail sales in order to maximize their profits, given the constraints on their supply chains and sales volume.

New vehicle inventory is tight. In June, about 41% of new vehicles were sold within 10 days of arriving at a dealership, up from 25% in June 2019. Supply of new vehicles is down to 39 days at the current rate of sales, when 60 days would be considered healthy. Last June, supply was 93 days.

A big reason for these massive profits is the spike in trade-in values. Wholesale prices of used vehicles have skyrocketed. The Used Vehicle Value Index by Manheim, the largest auto auction house in the US, spiked by 36.4% year-over-year through mid-June: 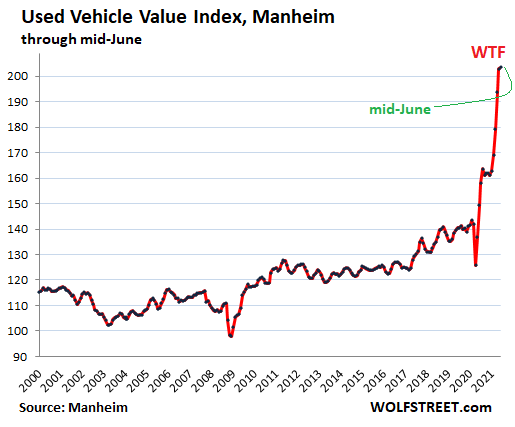 It now appears that the spike has stalled. By mid-June, the Manheim index was barely up from the end of May. And in the second half of June, the first reports of minor price declines have appeared. So the spike has finally hit resistance.

The shortage of new vehicles, particularly of hot truck and SUV models, has led to the bizarre reports of low-mileage used vehicles costing more than the new model would cost, if it were available.

When a customer comes in to buy a new truck or SUV, and the dealer is out of stock, but has a low-mileage used model available, the salesperson will switch the customer to the used vehicle. And these days, customers are willing to pay out of their nose for the privilege.

A study by iSeeCars, which combed through over 470,000 new vehicles and “lightly used” 2019 and 2020 model-year vehicles, found that the gap between new and slightly used had “drastically narrowed” across the board, and it found that 16 hot models were selling for more money as used vehicles than their equivalent new versions, that were not in stock.

On top of this list is the Kia Telluride. The model that would sell for $44,166 as new vehicle sold for $47,730 as slightly used vehicle. The first six on the list were either pickups (GMC Sierra 1500, Toyota Tacoma, Toyota Tundra) or SUVs (Telluride, Mercedes-Benz G-Class, Toyota RAV4 Hybrid).

In normal times, this is nuts. Why not wait a little while and buy a new vehicle for less? A buyers’ strike would very quickly bring down prices. And that could happen, but it’s not happening.

Then there are reports of dealers charging over sticker for new vehicles, and of customers eagerly paying over sticker – rather than go on buyers strike and wait it out.

Consumers and to some extent businesses have lost their pricing inhibitions – a hallmark of persistent inflation. It’s the psychological aspect of inflation. Rather than waiting till prices come down on discretionary products, consumers are buying because they want the vehicle now, and they’re paying whatever it takes.

While part of that used-vehicle price spike is temporary – and we’ll see it come down by some – that change in the mindset may be very persistent and hard to dislodge.