Back on June 9, when discussing the Fed’s gigantic cash-drain operation via overnight “reverse repos,” I mused in our illustrious comments: If the Fed at its June meeting doesn’t tweak its offering rate for overnight reverse repos and the interest rate on excess reserves (IOER), “my guess is that by June 30 (end of quarter), it” – the amount of overnight reverse repos – “could spike to $1 trillion.” The Fed then increased these two rates by 5 basis points. And today, that cash-drain operation shot up to nearly $1 trillion.

This morning, the Fed sold a record $992 billion in Treasury securities in exchange for cash, via overnight reverse repos (RRPs), to 74 counterparties. Yesterday’s overnight RRPs matured and unwound this morning, and were replaced, plus some, by today’s RRPs. You can practically hear that giant sucking sound of cash that the Fed is draining out of the financial system.

Reverse repos have the opposite effect of QE: They absorb cash. With these RRPs, the Fed sells Treasury securities and removes cash from the financial system. RRPs are a liability on the Fed’s balance sheet – cash that it owes the counterparties. With RRPs now at $992 billion, the Fed has undone over 8 months of QE (at $120 billion per month): 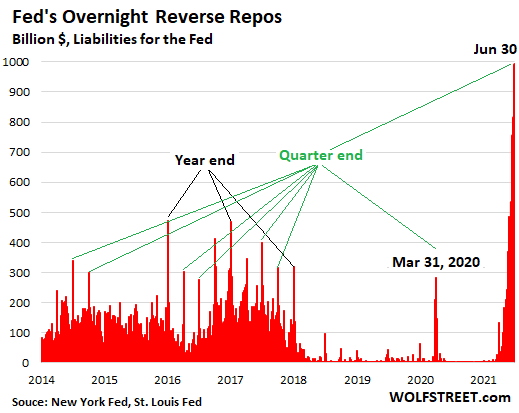 This issue dissipated after the Fed began its quantitative tightening (QT) program in 2018, which drained cash from the financial system the proper way.

The quarter-end bank balance-sheet clean-up is why I figured earlier in June that the RRP balance would hit $1 trillion on June 30, when banks for regulatory reasons would shed cash for a day and replace it with Treasury securities, via the repo market.

This is a further sign that the financial system is creaking under a huge amount of cash that resulted from the Fed’s massive QE, and this cash has trouble finding a place to go.

So today’s increase of $151 billion (from $841 billion yesterday) was likely due to the banks’ shedding cash. It is likely that a part of this increase today will be undone tomorrow (July 1), and that the overall balance will decline some, which would prove this assumption correct.

But the big issue over the past few months has been the flood of cash in money market funds, and they are trying to find a place to go with it. Now that the Fed pays 0.05% (annual yield) for overnight cash via RRPs, which is more than the yield of 3-month and shorter-term Treasury bills, that’s where some of the cash goes.

The New York Fed handles the overnight RRP trades. It discloses the total balance daily. But it does not disclose which specific counterparty it dealt with today. The list of approved counterparties includes big banks and broker-dealers (Primary Dealers), Government Sponsored Enterprises (GSEs such as Fannie Mae and Freddie Mac), and major asset managers with money market funds.

The actual amounts by counter party are disclosed only for the end of every month. The latest reporting was for the end of May, when there were $479 billion in overnight RRPs on the Fed’s balance sheet. Of them, 80% ($384 billion) were with just five financial institutions: Fidelity ($195 billion), Goldman Sachs ($60 billion); Morgan Stanley ($44 billion), JP Morgan ($43 billion), and Blackrock ($42 billion).

These funds can now earn a risk-free 0.05% (annual rate) on their excess piles of cash by handing their cash to the Fed, in exchange for Treasury securities.

Last spring, the federal government issued $3 trillion in new debt to fund the stimulus and bailout programs. At the same time, the Fed bought $3 trillion in securities, thereby monetizing the newly issued government debt – so that the market didn’t have to absorb that extra $3 trillion.

But the government didn’t spend that $3 trillion that it had raised. The unspent amounts remained in its checking account, the “Treasury General Account” (TGA) at the Federal Reserve Bank of New York, which peaked at $1.8 trillion in July 2020.

The Yellen Treasury has been trying to draw down the TGA to $500 billion by this summer. To do so, it cut back on the debt it issued, particularly short-term Treasury bills. At the same time, it is spending money hand over fist, and the drawdown is causing the cash in the TGA to flow out into the economy and thereby the financial system.

As of the Fed’s weekly balance sheet last Thursday, the TGA balance was $734 billion. When the TGA drops to the $500 billion level – $234 billion more to go – and doesn’t get drawn down further, the portion of the cash pressures in the financial system that is related to the TGA drawdown might abate or at least not get worse. 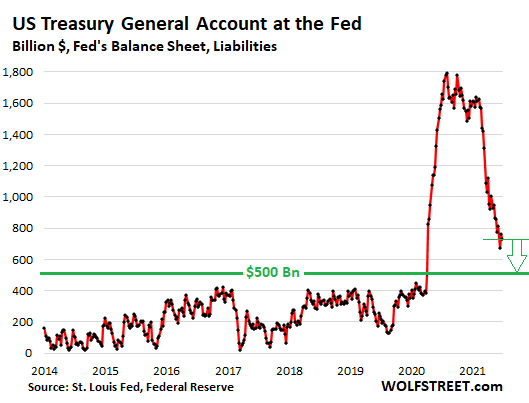 These cash pressures originated as a result of the Fed’s crazy and continued money-printing binge. Obviously, the real solution to the cash pressures would be to stop QE and then begin unwinding the assets on the Fed’s balance sheet. But that would be too radical a step to take. The Fed has mopped up $1 trillion in short-term cash via the repo market.