United, the US airline with the most flights to China, started suspending some flights between the US and Shanghai, Beijing, and Hong Kong in the first week of February 2020 due to a “significant decline in demand,” it said at the time as the then new coronavirus was spreading. “We will continue to monitor the situation as it develops and will adjust our schedule as needed,” it said. This was followed by flight suspensions and travel bans across the globe. By April, the airline passenger business had collapsed. So where are we now?

Over the past seven days, not quite 707,000 passengers per day on average passed TSA checkpoints at US airports, a measure of how many passengers in the US are flying somewhere. This was down by 61.6% from the same period in 2019, the last full year of the Good Times. At the end of January, the drop from 2019 was over 65%.

Amid all the ups and downs, there still hasn’t been much improvement in terms of airline passenger traffic in the US since last September: 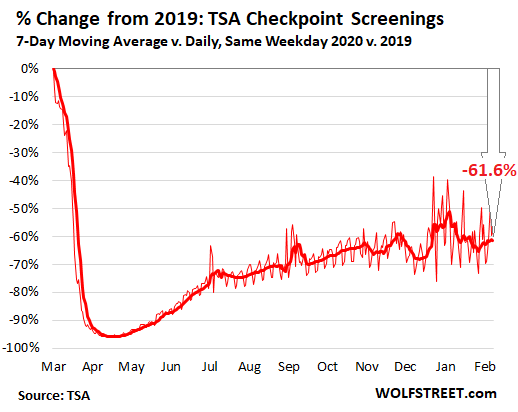 Over the past year, the normal seasonal increases and decreases have been replaced by what may be a new pattern, also with seasonal changes, but different changes. Business travel for all kinds of meetings and conferences – the most lucrative end for airlines – has remained very sparse. And the seasonality of business travel has largely faded from the chart.

And the seasonality of leisure travel has been upended by travel restrictions for foreign vacation destinations and reluctance by many people to get anywhere the inside of an airport just to have fun for a week somewhere else. Driving vacations and RVs have become hot.

In the chart below, the bold red line shows the seven-day moving average of the number of air travelers who passed through TSA checkpoints daily from March 1, 2020, through February 7, 2021. The thin red line indicates the daily number of screenings. The green lines show the same for 2019: 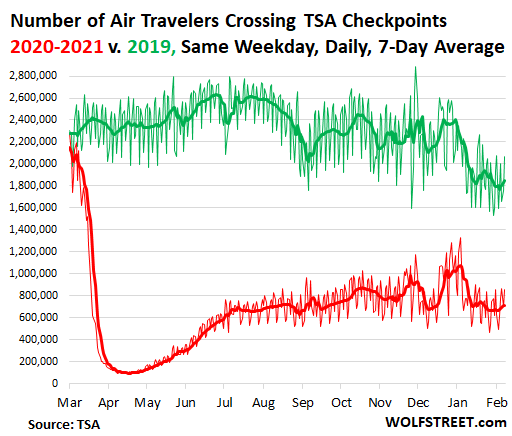 For the fourth quarter, revenues of the six largest US airlines combined – American, Delta, United, Southwest, Alaska, and JetBlue, with Spirit not having reported yet – plunged by 65.9% from a year earlier. For the year 2020, revenues plunged by 62.7%.

The airline industry has invented a term to track the performance of the airlines in this environment – “daily cash burn” – to allow folks to calculate at the current rate of daily cash burn how long the airlines can continue to service their debts.

The airlines have piled up mountains of cash from a series of government bailouts, most of them grants, and from the craziest financial markets of all times, created by the Fed, that allowed the airlines to sell more shares and tons of debt.

The airlines have pledged their frequent flyer programs as collateral which allowed Delta, for example, to borrow another $9 billion. They have sold old aircraft, including to Amazon for freighter conversions. They have engaged in sale-lease-backs of their aircraft to raise cash. They have done everything imaginable to each raise many billions of dollars of cash to burn through this year.

Even if business eventually goes back to “normal” – whatever that may mean and however many years this may still take, amid growing industry suspicions that the lucrative business travel segment may never go back to the old normal – those huge mountains of debt will stay.

Meanwhile, back in the financial markets…

Forget the collapse in revenues and the astronomical losses and ongoing cash-burn and the hellish pile of debt these airlines now have… as has become standard practice in the craziest financial markets ever, airline shares have soared, with the WOLF STREET index of the largest 7 airlines more than doubling since April, and aiming back toward levels before the crisis, including gains of nearly 5% today: 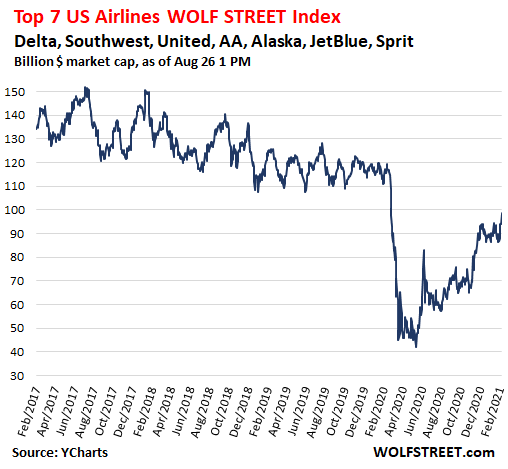 126 comments for “One Year After the Collapse of the Airline Business Began: What’s the Status Now?”