“There is no justification” for continuing the purchases of mortgage-backed securities. The Fed is “misdiagnosing its impact on the housing market.” Pressure rises on the Fed to back off, in face of market craziness.

During the press conference following the FOMC meeting last week, Fed Chair Jerome Powell was asked by different reporters about the craziness going on in the stock market, the chaotic thingy with GameStop, corporate debt, and the housing market.

The fact that he was asked several times about the exuberant nuttiness in asset prices shows that by now everyone has picked up on it. And people are increasingly incredulous that the Fed would continue with its monetary policies in face of these markets.

Powell brushed off the GameStop thingy and gave his usual it’s-not-our-fault and it’s-never-ever-our-fault justifications for the exuberant nuttiness in the markets. The near-0% interest rates and $3 trillion in QE in just a few months had nothing to do with anything, but the drivers of the nuttiness have been the “expectations about vaccines” and “fiscal policy,” he said (transcript). “Those are the news items that have been driving asset values in recent months.”

Upon hearing this, people globally were just rolling up their eyes. And a reporter challenged him softly about the housing market – the 9% surge in prices from already lofty levels. “Are you concerned about a bubble forming there yet? And is there a price increase that you’re looking at where it might change the level of mortgage-backed securities the Fed is buying?”

That price surge “we think is a passing phenomenon,” he said. “There’s a one-time thing happening with people who are spending all of their time in their house. And they’re thinking either I need a bigger house, or I need another house, and a different house. Or a second house in some cases. So there’s a one-time shift in demand that we think will get satisfied, also that will call forth supply. And we think that those price increases are unlikely to be sustained for all of those reasons.”

He said this after having said out of the other side of his mouth, “the housing sector has more than fully recovered from the downturn, supported in part by low mortgage interest rates.

And he never responded to the question about changing – reducing – the mounts of mortgage-backed securities the Fed is buying.

Quoting Powell’s “the housing sector has more than fully recovered from the downturn,” the American Enterprise Institute Housing Center said in a presentation this week that therefore “there is no justification for continuing or increasing investment in agency MBS.”

Here are some of the points of the AEI’s presentation. It demonstrates how the Fed has gone nuts with its asset purchases and interest rate repression. 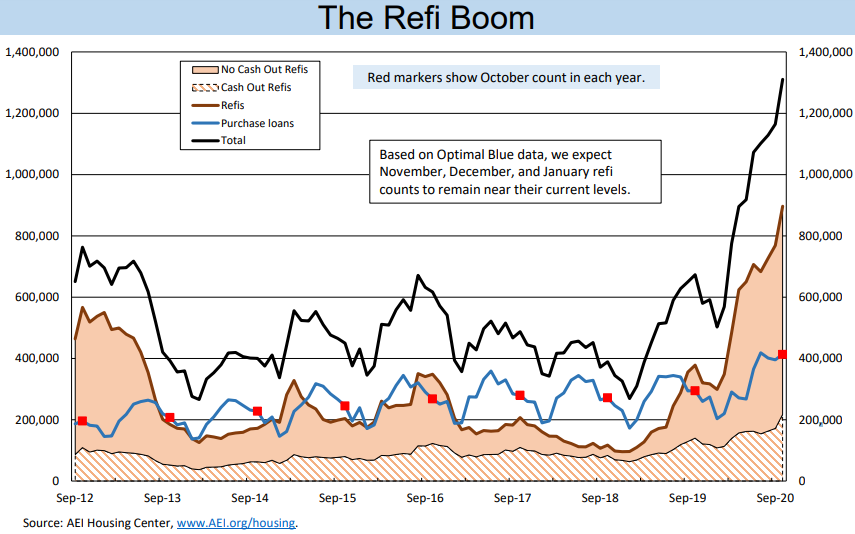 The Fed has used its monetary policy tools, including purchasing large quantities of MBS, to push mortgage rates to record lows, though they have bounced off a tiny bit in recent weeks: 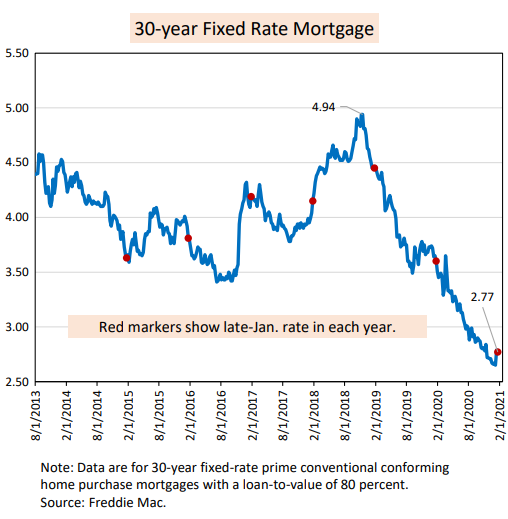 And this “monetary punchbowl is fueling rampant home price appreciation,” the AEI said. Its preliminary national Home Price Appreciation (HPA) index for December has risen to 11.0%, up from 6.0% a year earlier, “due to lower mortgage rates.” And the AEI estimates that the rate of HPA “will further accelerate over the coming months” – with the national average heading closer to 14% year-over-year: 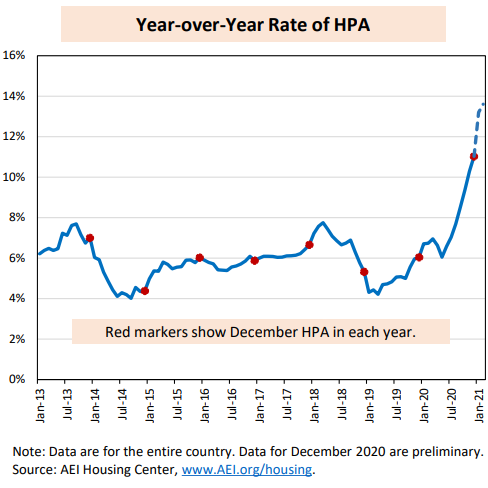 Home price appreciation by price tier: The medium-high (yellow line) and high (blue line) price tiers, “which are more dependent on the monetary punch bowl,” are showing the strongest rates of price appreciation. “This is a trend reversal, since historically the low price tier has shown the fastest year-over-year HPA”: 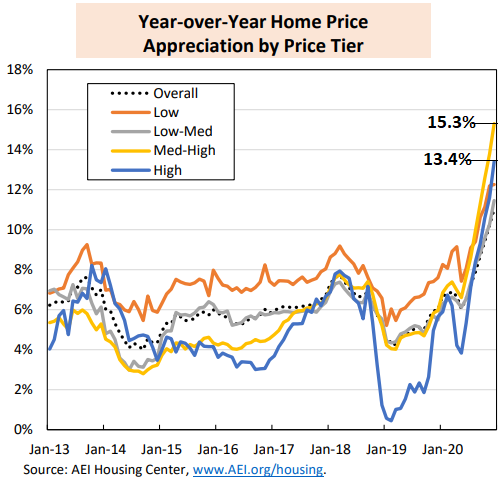 “The FOMC Is Misdiagnosing Its Impact on the Housing Market.”

The AEI threw cold water on Powell’s statement that the home price surge is “a one-time shift in demand that we think will get satisfied, also that will call forth supply,” and that therefore “those price increases are unlikely to be sustained.”

Home price appreciation “is exploding, with no end in sight,” The AEI says.

In the medium-high and high price tiers – “think move-up buyers” – where prices have surged the most, the default risk is relatively low due to “minimal leverage” and the “added buying power” from work-from-home. But the “arbitrage opportunity” that the shift to work-from-home offers by moving to cheaper areas that are further out in the suburbs of the same metro or moving to a less expensive metro “will likely take many years to play out.”

Default risks are higher in the low to medium price tiers – “think first-time buyers” – since they’re “much more highly leveraged” and work-from-home is less prevalent in these income categories. And in these price tiers, “affordability continues to worsen, even in places that used to be more affordable.”

And so the AEI summarizes that “there is no justification” for the Fed to continue its purchases of mortgage-backed securities.

The historic short squeeze, engineered by millions of deeply cynical small traders, exposed just how rigged the market has been. Read… THE WOLF STREET REPORT: The Stock Market Is Broken, Now for All to See