High costs, working from anywhere, and sudden dislike for towers trigger large-scale shifts in the housing market. Tulsa is paying people with full-time work-from-anywhere jobs to move there.

These markets are facing tenants who either leave the city – now that they can work from anywhere on what they believe to be a permanent basis – or who stay in the city but move out of high-rise towers to buy a house. The soaring vacancies and plunging asking rents and incentives – “three months free” – then spur the remaining tenants to look for better deals, and churn ensues. Tenants upgrade for the same price, or rent an equivalent unit for a lot less, attested to by a surging number of lease signings in markets where rents have sharply dropped.

In San Francisco, still the most ludicrously expensive rental market in the US, the stunning downward spiral in rents has paused. The median two-bedroom asking rent, at $3,500 in January, was unchanged from December, after having plunged 23% from a year ago, and 30% from the peak in October 2015. The median one-bedroom rent ticked up for the first time since June 2019, by 0.8% to $2,680, but is down 24% from a year ago and 28% from June 2019: 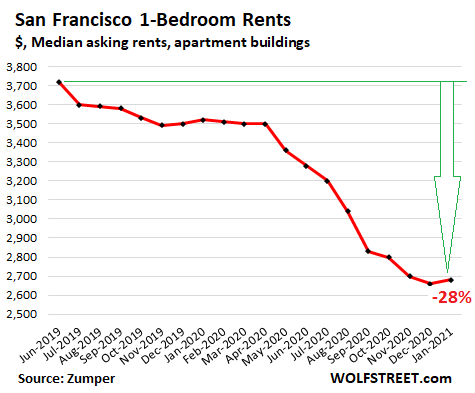 There are now reports of vacancy rates of 30% in luxury apartment towers in San Francisco, with landlords advertising “three months free.”

During San Francisco’s dotcom bust, rents plunged by about as much, but it took twice as long – three years – from Q1 2001 through Q1 2004, and it took over a decade and another boom for rents to surpass their dotcom peak. 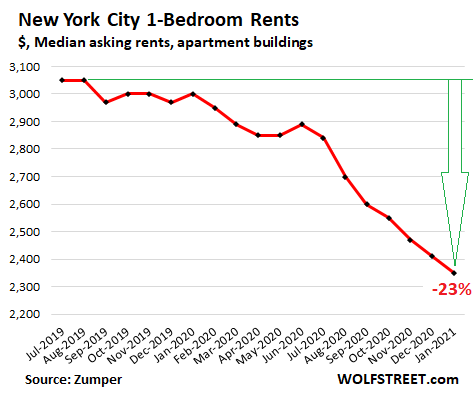 But in Newark, where some of the New York City rent refugees ended up, rents have skyrocketed by 52% since July 2019. Much of the surge took place over the past seven months.

In January, the median asking rent for one-bedroom apartments rose by another 1.2% from December, after having jumped by 8.1% in the prior month, and is up by 32% from a year ago, and by 52% from June 2019. This rent explosion has pushed Newark into 9th place of the most expensive major rental markets in the US, up from 40th place in June 2019: 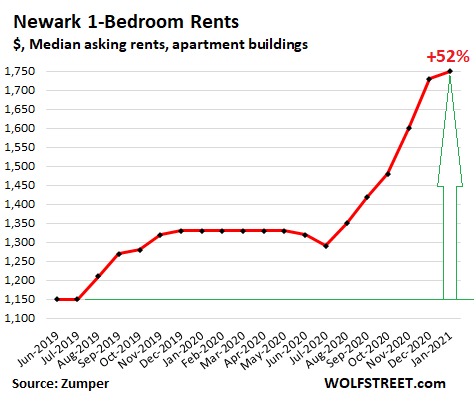 These rents here are median asking rents for units in apartment buildings, including apartment towers and new construction, but not single-family houses for rent, and not condos for rent. Zumper collects this data from the Multiple Listings Service (MLS) and other listings, including its own listings, in the 100 largest markets of the US.

“Asking rent” is the advertised rent of a rental apartment, but does not include concessions, such as two months free. “Median” asking rent is the middle asking rent, with half of the asking rents higher and half lower. 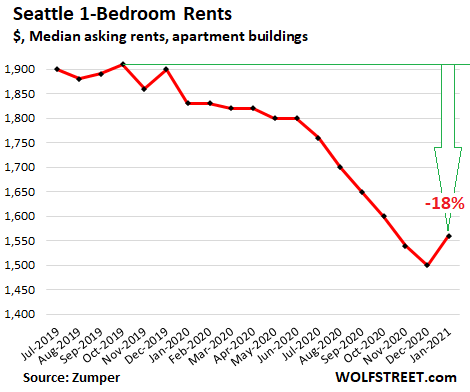 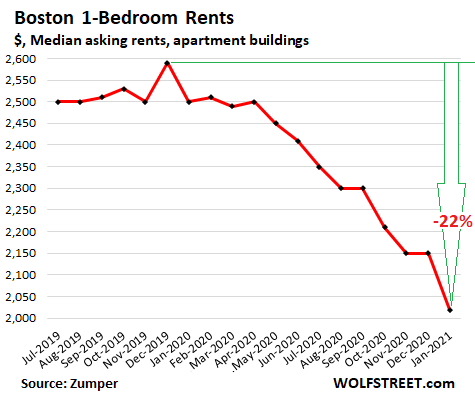 The shaded area in the table below shows peak rent and the changes from peak rent. The black entries in the shaded area indicate rent records set in December. 14 of these markets have experienced double-digit declines in 1-BR rents from their respective peaks in prior years, topping out with Honolulu (-31%), New York (-30%), and San Francisco (-28%). Newark, with its year-over-year jump in 1-BR rents of 32%, was catapulted into the list in December: 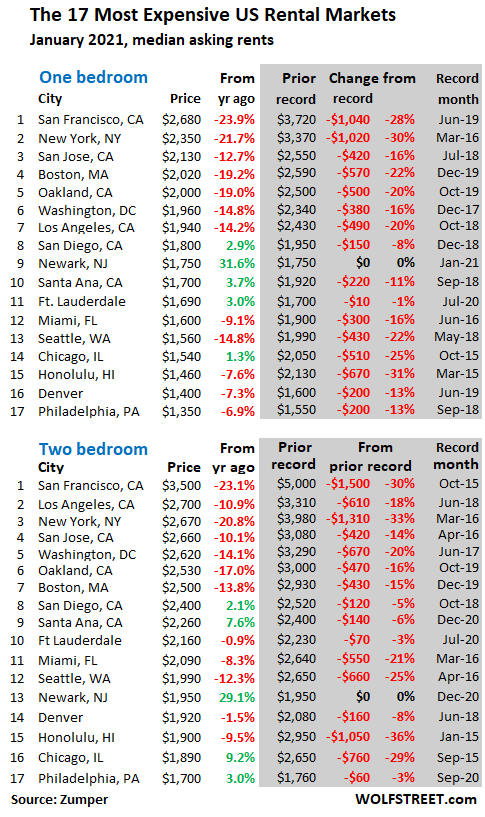 They pay you $10,000 cash if you move to Tulsa. The city has been through a horrible time since the oil bust of the 1980s, when oil companies moved their headquarters to Houston, leading to a permanent outflux of well-paid jobs. I was living there at the time. Now the city is trying to leverage work-from-anywhere to bring in people with full-time work-from-anywhere jobs outside Oklahoma, and people who are “self-employed outside of Oklahoma.” To do this, it is offering $10,000 cash plus other perks. And cheap housing.

In Detroit, at the bottom of this list, the median 1-BR rent shot up by 26.8% from a year ago to $900. The city’s downtown has been on a revitalization track for a decade. And there are some other double-digit gainers on this list:

The 28 Cities where 1-BR rents dropped.

Of the 100 largest rental markets, the median asking rent for 1-BR apartments rose in 67 cities year-over-year, remained flat in 5 cities, and fell in 28 cities. Among those cities where rents fell, 21 booked year-over-year rent declines over 5% and 9 booked rent declines over 10%, topped off by 8 of the usual high-dollar suspects, and by Wichita, KS, the second cheapest rental market in the US:

In 31 of the 100 largest rental markets, the median 1-BR asking rent soared between 7% and 32% year-over-year in January. In 21 of them, rents jumped 10% or more, with Newark on top (+31.6%). These are huge rent increases, and they run in parallel with the huge rent declines in other cities, clearly indicating that large-scale shifts in the housing market are underway:

The table below lists the largest 100 rental markets, with 1-BR and 2-BR median asking rents in January, and year-over-year percent changes, in order of 1-BR rents. You can search the list via the search function in your browser. If your smartphone clips the 6-column table on the right, hold your device in landscape position: