For now, the story is that it’s just temporary.

For now, the story is that the sudden and massive shifts in the economy in 2020 have caused shortages and distortions in the goods-producing sectors and in shipping and trucking, as consumer spending has shifted from services – such as flying somewhere for vacation and spending oodles of money on lodging and restaurants and theme parks – to goods, particularly durable goods.

The story is that prices are rising because components and commodities are in short supply, and supply chains are dogged by production issues, and are facing transportation constraints, as demand for those goods has suddenly surged. And that all this is temporary.

And the Fed has said it will ignore inflation for a while, that it will allow it to overshoot, and only when it overshoots persistently for some unknown amount of time and becomes “unwelcome” inflation – “unwelcome” for the Fed – that it will try to tamp down on it.

Meanwhile, inflation pressures are building up. Two reports out today show a large-scale surge in price pressures for manufacturers – and they’re able to pass them on to their customers.

The Prices Index “surged dramatically in January” to a level of 82.1%, after an eight-month upward trajectory, the highest since April 2011, “indicating continued supplier pricing power,” said the Manufacturing ISM Report On Business.

In the ISM data, a value above 50 means expansion, and a value below 50 means contraction. The higher the value is above 50, the faster the expansion. January saw the fastest expansion of the Prices Index since April 2011 (data via YCharts): 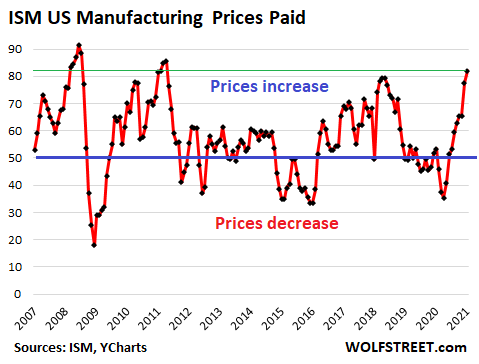 Of the roughly four dozen commodities in the index – from corrugated boxes via cold rolled steel and plastic resins to memory chips – only one showed a price decline (caustic soda); all others increased. Some of the prices started increasing more recently, but others have been increasing for eight months, including copper.

A number of commodities were considered in “short supply,” including:

The ISM data is based on how executives see business conditions at their own companies. The names of the companies are not disclosed in the report. Executives are asked if various business conditions – orders, prices, employment, etc. – are up or down in the current compared to the prior month.

For manufacturers and their supply chains, the shifts in the economy, and also other issues are contributing to a slew of problems: “Survey committee members reported that their companies and suppliers continue to operate in reconfigured factories, but absenteeism, short-term shutdowns to sanitize facilities, and difficulties in returning and hiring workers are continuing to cause strains that limit manufacturing growth potential.”

Similar price pressures were reported today in the IHS Markit U.S. Manufacturing PMI, which added that manufacturers, given the strong demand, were able to pass a portion of these cost onto their customers via increases in selling prices.

In January and also December, supplier performance “deteriorated to the greatest extent since data collection began in May 2007,” the report said. “Supply chain disruption reportedly stemmed from raw material and transportation shortages, notably trucking,” and also from overseas “due to a lack of shipping capacity.”

“Lead times are lengthening to an extent not previously seen in the survey’s history, meaning costs are rising as firms struggle to source sufficient quantities of inputs to meet production needs,” the report said.

And “amid favorable demand conditions,” manufacturers were able to pass these higher costs on to their customers via higher prices, “with selling prices rising at the fastest pace since July 2008.”

The report cited strong demand for goods from consumers and from businesses that “are investing in more equipment and restocking warehouses.”

The report too assumes that the supply conditions will start to improve, and “these price pressures should ease,” but they “could result in some near-term uplift to consumer goods price inflation.”

So for now, everyone is on the bandwagon that these price pressures are just temporary, a result of the sudden shifts in the economy, and that they will reverse when those shifts reverse.

Consumer spending on goods has surged in 2020, particularly on durable goods, as demand for services, which account for nearly 70% of the economy, has dropped sharply. There is now massive inflation in shipping costs, including ocean freight, driven by the surge in demand for goods and capacity constraints. In December, spending on durable goods, though down for the second month in a row, was still up 11% from a year earlier after a historic spike in demand (from Americans Cut Back as Income from Wages & Salaries Hit Record as 10 Million People Still out of Work: Weirdest Economy Ever):

169 comments for “Inflation Galore at Manufactures, amid Shifts in Demand, Supply-Chain Snags, Shortages, Lack of Shipping Capacity. And They’re Passing it On”